[Scroll down for updates throughout the day.]

Listen to this interview on PBS with Michael Oren, Israeli Ambassador.

MEMRI has published a several excerpts from video from Arabic-language sources:

“Gaza-Based Yemeni Professor Abd Al-Fatah Nu’man: As Much As the Heroes on the Flotilla Want to Reach Gaza, the Option of Martyrdom Is More Desirable to Them – Al-Aqsa TV, May 28, 2010”

“Egyptian Expert on International Law Ahmad Hassan Omar: Turkey and Other Countries Should Use Aid Convoys to Transfer Weapons to Gaza and Returning Refugees to Acre – Al-Jazeera, May 18, 2010”

Let’s add a link to this excellent Dyer post at Commentary.

It appears the eighth ship was  manned with a radical Islamist group from Turkey:

However, one of the main groups involved in the flotilla that was raided by Israeli commandos yesterday (MON) was the Turkish Foundation for Human Rights and Freedom and Humanitarian Relief, which is a radical Islamist group masquerading as a humanitarian agency.

See Roger L Simon’s video interview with Richard Landes in Israel, from today, on PJTV.  The missing information: seven of the eight boats surrendered peacefully.  One was full of armed Islamists.

Early this morning (31 May), IDF naval forces intercepted six ships attempting to break the naval blockade of the Gaza Strip. This happened after numerous warnings from Israel and the Israel Navy that were issued prior to the action. The Israel Navy requested the ships to redirect toward Ashdod where they would be able to unload their aid material which would then be transferred over land after undergoing security inspections.

During the boarding of the Marmara ship, the demonstrators onboard attacked the IDF naval personnel with live fire and light weaponry including knives and clubs. Additionally two of the weapons used were grabbed from an IDF soldier. The demonstrators had clearly prepared their weapons in advance for this specific purpose. 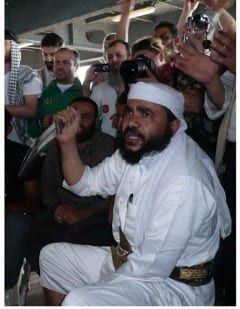 Photo from the Middle East of a "Peace Activist" from the flotilla.

Even before the gunfire and violence at sea died down, the conflict over the Israeli interception of the Gaza-bound “Freedom Flotilla” began raging uncontrollably in the media and across the Internet, around the world and within Israel; and the flames promise to burn for some time to come.

Immediately following the interception of the flotilla in the waters outside Israel and Gaza in the early morning hours, the public relations ground belonged exclusively to those who wished to demonize Israel. As the number of casualties began to mount, the incident was described as a “slaughter'”or a “massacre” by Arab leaders, including Palestinian Authority President Mahmoud Abbas. There were pictures of hundreds — which quickly multiplied into thousands — of angry demonstrators storming Israeli consulates and embassies in Turkish cities with shouts of “Damn Israel.”  And the international outcry against the actions of Israeli forces began with Israeli ambassadors recalled in Turkey and called on the carpet in Swedish and Spanish foreign offices as morning broke across Europe.

It took several critical hours for Israeli officials to wipe the sleep out of their eyes, gather their facts, and begin to counterattack by presenting their side of the story to the world. Deputy Foreign Minister Danny Ayalon held a press conference in which he described Israel’s numerous attempts to peacefully intercept the “Freedom Flotilla” towards Gaza in violation of the Israeli blockade, and attempts to convince them to detour towards the port of Ashdod where their humanitarian supplies would be unloaded and transferred into Gaza via land.

Video was released to the media from cameras that accompanied the forces landing on the boats, showing the so-called “unarmed humanitarian activists” clearly attacking and beating the soldiers who boarded their ship. The Israelis’ orders had been clear. Their boarding of the ship was planned as a police action, and they were prepared to tread gently with a group of people who had described themselves as peace activists and whose intentions were to act with “passive resistance” if Israel intercepted their ships.

If the Israeli armed forces believed those declarations, then they were naive. Upon boarding the ships, the soldiers encountered fierce resistance from the passengers who were armed with knives, bats, and metal pipes. According to the IDF:

During the boarding of the ships, demonstrators attacked Naval personnel with live fire and light weaponry including knives and clubs. Additionally, one of the weapons used was grabbed from an IDF soldier. The demonstrators had clearly prepared their weapons in advance for this specific purpose.

As a result of this life-threatening and violent activity, naval forces first employed riot dispersal means, and followed by live fire.

Needless to say, these details were not getting mentioned frequently in the European media’s morning coverage of the incident, where Israel’s boarding of the ship was  described exclusively as an “attack” and the Israelis as aggressors, with their actions being described as “criminal.”

Undeniably, Israel appears to have stepped directly into a trap of a carefully planned suicide mission dressed up in the clothing of a humanitarian effort. If the goal was to blacken Israel’s image internationally, it was undoubtedly successful, as the hateful sloganeering against Israel sweeping across Facebook and Twitter demonstrates.

As they watched the public relations nightmare unfold, many Israelis — even those who support the three-year-old blockade on Gaza — began asking if it couldn’t have been executed in a manner that might have avoided bloodshed. Commentators in the Israeli media asked whether it could or should have been possible to block the flotilla’s progress at sea without sending soldiers on board, or somehow surrounding and isolating the flotilla and stranding them at sea. Others asked whether it would have been so terrible to allow the flotilla to arrive in Gaza without incident, despite the fears that it would set a precedent and cause damage to Israel’s security. Questions were raised as to whether the damage created by the operation was not greater than that potentially incurred by allowing the flotilla to defy the blockade.

This damage is expected to be significant in a number of ways. First and foremost, since the mission was represented as that of the Turkish Humanitarian Relief Foundation — though its “humanitarian” nature is a matter of controversy — there is significant worry about how the events surrounding the interception of the flotilla will act as a catalyst for Israel’s already problematic relationship with Turkey. Haaretz commentator Amos Harel wrote:

The damage that Israel has caused itself internationally can hardly be exaggerated. A previous crisis with Turkey that erupted earlier this year after Israel humiliated Ankara’s ambassador now looks like small change in comparison. Even before then, relations with Turkey had deteriorated over Israel’s Operation Cast Lead in Gaza and the generally anti-Israeli stance taken by Turkey’s moderately Islamist government. The new crisis is likely to lead to a total break in ties.

In addition to the international damage, the aftermath is also exacting a price from Israel internally, with demonstrations that very well may turn violent scheduled to take place in Arab communities across Israel. The unrest among Arab Israelis was heightened by persistent rumors that the head of the Israeli-Arabic Islamic Movement’s northern branch, Sheikh Raed Salah, was among the casualties in the clash, and that the Israeli forces had targeted him directly.

Unfolding events are also undoubtedly throwing a wrench into the plans for what both countries had planned would be a warm and conciliatory meeting between President Obama and Israeli Prime Minister Binyamin Netanyahu on Tuesday, which was hoped to smooth over the recent bumps in the U.S.-Israel relationship. According to reports in the Israeli media, Netanyahu has seriously been considering postponing the visit, but a final decision has not yet been made, as officials debate the benefit of the visit with the potential political damage caused by the prime minister being overseas when the situation at home is so volatile.