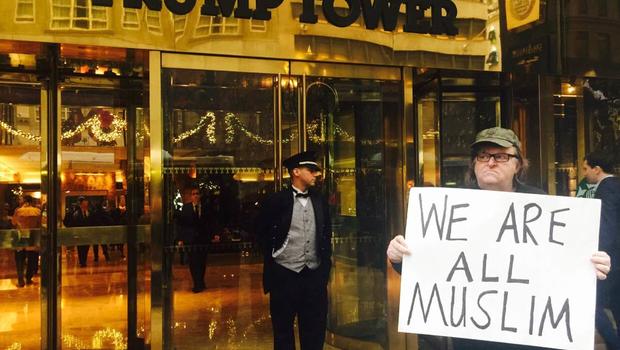 Sententious fat ass and filmmaker Michael Moore stood outside the Trump Tower in New York City earlier this week, holding up a sign that read “We Are All Muslim.” Moore said he was proclaiming his deep conviction that everyone is united in believing in second-class citizenship for women and throwing gay people off towers to their deaths. The insipid action was a protest against Donald Trump’s plan to talk loudly and offensively while doing nothing.

The protest came to a sad end when a passerby explained to Moore that Muslims can’t eat pork and that they fast for the entire day throughout the month of Ramadan. After learning this, Moore hurriedly changed his sign to read “We Are All Muslin,” protesting the abuse of cotton fabrics. Moore later celebrated his successful outing by wolfing down a fried pork chop soaked in lard, saying, “Wow, good thing we aren’t all Muslim, or I’d never get to eat like this!”

Donald Trump was not available for comment, but his spokesman said that, if he were available, he would respond to Moore with a coarse personal insult while rolling his eyes.