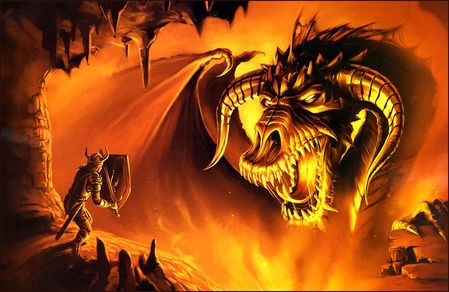 A Deplorable Incident of Drago-phobia!

This 2010 essay of mine on Beowulf — the oldest epic poem in English (and great stuff if you’ve never read it) — is available in the excellent collection Thrillers: 100 Must Reads. I reprint it here in honor of Memorial Day, with humble thanks to all those who gave and give their lives to keep us safe and free.

Great works of literature often peel away the mask of our piety to expose the raw life underneath. So it is with Beowulf, a brooding, blood-soaked celebration of warrior manhood.

We in the modern West have been so powerful, so dominant, so safe in our homes for so long that we slip too easily into the illusion that we live at peace. We are never at peace, not really. When we go to the ballet or walk in the park or stop to smell a rose or read a book, we only do so by the good graces of the fighters who stand ready to kill and die to defend us. Soldiers on our borders, police officers on our streets—only the threat of their physical force keeps those who would murder, rob, or enslave us at bay. Every moment of tranquility and freedom implies the warrior who protects it. The world of Beowulf is the real world.

And what a wonderful poem it is, a tale and a tone of such ferocious, melancholy virility that it shocks the sometimes overdelicate modern mind. It’s the story of the Scandinavian hero Beowulf and his battles with monsters. It begins when Beowulf travels from Geatland in what is now Sweden to Denmark to come to the aid of King Hrothgar in his towering mead hall Herot. The Danes are being plagued by the swamp monster Grendel, “that shadow of death,” who hunts their warriors in darkness, “lying in waiting, hidden in mist, invisibly following them from the edge of the marsh, always there, unseen.” Beowulf is such a tough Geat, so bent on winning fame for his courage and prowess, that he disdains to use a sword to kill the beast and wrestles him bare-handed, ripping his arm off by main strength. Grendel slouches home to his swamp to die, thus sparking the rage of his mother, who comes for her revenge.

There’s plenty more—including digressive tales of war, betrayal, and tragedy—all set on misty fens and under murky waters and in broken, crumbling towers and halls that seem the earliest inspiration for the setting of many of today’s video games. Which is fitting, because really you have to turn to those games to find anything in modern art that so boldly elevates and celebrates the warrior and his drive to “win glory and a hero’s fame” in battle.

If you want to see how completely more “sophisticated” modern artists have lost the ability to understand those virtues and their ever-present necessity, take a look at the 2007 CGI film Beowulf by director Robert Zemeckis and screenwriters Neil Gaiman and Roger Avary. Note how entirely it subverts and corrupts the vision of the original. In the film, the warriors are drunken thugs and Grendel is King Hrothgar’s bastard child. This implies not only a measure of responsibility on the part of the Danes for their own slaughter, but also a tiresome Freudian psychomachy underlying the action. In the poem, conversely, Grendel is the child of “those monsters born of Cain, murderous creatures banished by God.” He is roused from his slumber by the music and rejoicing in Herot, especially a poet’s song of the world’s genesis. The implication in the poem is far more insightful and unflinching than that in the film. The poem’s Grendel is a primal force of evil spawned by sinful human nature itself and now perennially at war with the creation. The guilt is not sexual and personal but general in terms of mankind’s instinct toward fraternal violence.

That general guilt gives Beowulf ’s heroism its context. It tells us that evil is woven into human nature, but that individual men may choose to stand against it. The film Beowulf descends into moral equivalence and relativism as Beowulf, in his turn, is seduced by Grendel’s mother, a slinky CGI version of the likewise slinky Angelina Jolie. “I know that, underneath your glamour, you’re as much a monster as my son, Grendel,” she tells him. Which is blithering nonsense. In the poem, she’s the monster and he’s the guy who’s got to kill her so that men may live in peace. That may not be nuanced or urbane or pseudo-deep, but it’s actually more honest, more like life as it is lived. The evils of this sad world are not always susceptible to analysis or negotiation. Some monsters are really monsters and just have to be taken down. That’s why poets write—or used to write— epics honoring the warriors who do the job.

And that’s why it’s fair to trace the thriller novel’s pedigree back to Beowulf and to include the epic in a list of thriller must-reads. It may not be a thriller in the modern sense of the word, but it holds the kernel of the idea that gives our genre one of its key reasons for being. In modern fiction, only genre novels—crime, horror, fantasy, sci-fi—regularly dramatize the existence of evil, the need for courage, and the glamour of physical strength and fighting skill. It’s an essential and too often neglected role of the arts to portray these things. If they don’t, it becomes too easy for us to forget them, too easy for us to be self-satisfied with our lives of compassion and peaceful loving kindness without paying tribute to the warriors who make those lives possible.