ISIS and the Missing Christ 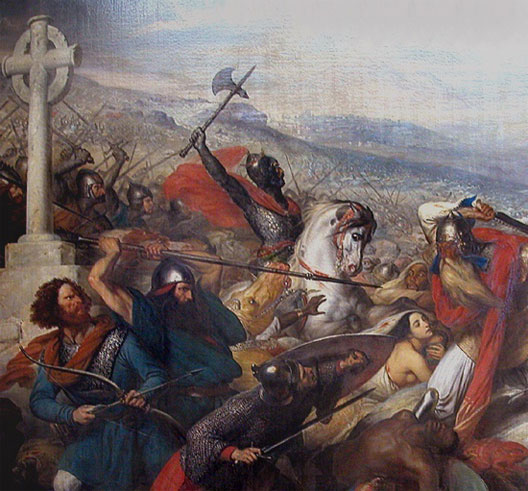 Charles Martel on his High Horse.

Like everyone else who cares more about the facts than his own opinions, I’ve recently read Graeme Wood’s excellent Atlantic article “What Isis Really Wants.” Those of you making do with excerpts and pull quotes, stop, and go read the whole thing. That it renders the president’s statements about ISIS absurd is the least of the article’s accomplishments. No one but a small coterie of leftist knuckleheads believes what Obama says on this subject anyway — though it’s unfortunate that the president himself is part of that coterie.

Among the many things in the piece that inspire thought is Wood’s reflection on the attractions of the ISIS ideology. The mass executions, the crucifixions, the enslavements, the oppressive religiosity and the war cry to a worldly disaster that will initiate the apocalypse — they are all drawing believers to the Islamic State from around the world. Wood himself felt the attraction, he says, while talking to ISIS supporters. He ends the article by quoting Orwell on the allure of Nazism:

Whereas Socialism, and even capitalism in a more grudging way, have said to people “I offer you a good time,” Hitler has said to them, “I offer you struggle, danger, and death,” and as a result a whole nation flings itself at his feet. … We ought not to underrate its emotional appeal.

We really ought not. Nor should we underestimate the need to offer young people especially something in its place. As much as I believe in capitalism as a method of economic development, a capitalist life is empty without spiritual content. Indeed, as much as I believe in individual freedom as the only worthwhile goal of any political system, individual freedom too is empty without spiritual content.

It is in that emptiness that militant Islam grows like the cancer it is.

Battered by the religious wars of the Reformation, making adjustments to a global economy and multi-cultured nations, the West has slowly become diffident in defense of its central faith. And there is some wisdom in that. Christianity is a religion, to paraphrase St. Paul, that frees us for freedom, and faith in Christ must be chosen freely to be fully realized. But to move from that position — which calls for intellectual rigor, unfettered debate and honest proselytism — to indiscriminate acceptance of all creeds as equally worthwhile is an error that does the world more harm than good.

Whenever I hear someone announce that “All religions are a path to God!” I wonder how it would work if you applied such “tolerance” to, say, medicine or science. “All medicines are a path to health! You take antibiotics, I cut the head off a chicken and dance under the full moon, really what’s the difference as long as we both believe it will make us well?” Or “All science is a path to progress! You invent an iPhone, I invent a weaponized disease, it’s all science, man, it’s all great!”

When you put it this way, it becomes clear that the idea that all religions are equally worthwhile is essentially an atheist creed. To say All religions are a path to God is really saying, No religion is a path to God.  There is no God, so what difference does your religion make? When something is true, when it is factual, when it is real, it excludes other options. The world can’t be both flat and round. When you accept the roundness of it, you can no longer entertain its flatness. It’s one or the other.

If God is the Christian God of love, he is not the Allah of Isis.

If there is a God — and, spoiler alert, there is — then like everything else that exists, there are things that are true about Him and things that are false. We who have voices better start telling the Truth without fear. Otherwise, our silence, and the emptiness that silence creates, will leave all the world to the likes of ISIS and their god — who is not God at all, by the way, but another fellow entirely.