Makers and Takers and... Someone We Forgot!

I’m going to write one more post about the election and then knock it off and go back to writing about the culture and about politics from a broader perspective.

One of my personal rules in life is this: whenever I start feeling a satisfying swell of righteous certainty, I begin to suspect that I might be wrong. You may not always be in error when you begin a sentence with, “Well, sir, if you would just read your Constitution…” or “the Word of God clearly says…” but the odds in favor of your making a pompous ass of yourself are, trust me, astronomical.

So I should have known we had a serious problem when I felt that righteous surge at Mitt Romney’s now infamous 47% remarks:

I did not agree with this — but I did agree with what I thought he meant: there are too many takers and not enough makers nowadays. And even as the Democrats beat the words like a drum, I defended Romney’s comments to my friend E.J. McMahon at the Manhattan Institute’s Empire Center. E.J., one of the savviest political observers I know and one of the best predictors of political outcomes, told me almost the moment these words were made public — not that they would cost Romney the election, but that they represented the sentiment and approach that would, in fact, cost him the election.

He was right. I was wrong. I owe him dinner. 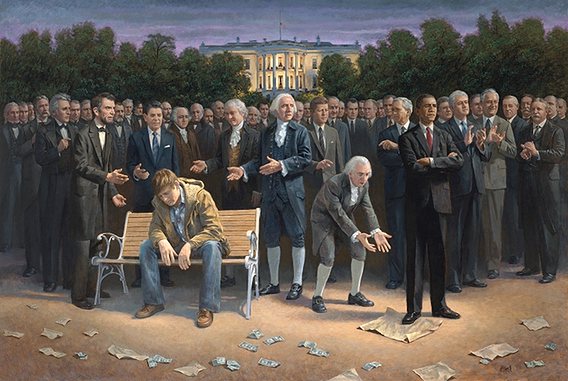 Many commentators on the right — many I truly like and respect — are reading this election as a tipping point: Tocqueville’s nightmare come to life, when the voters realize they can use their franchise to pillage the public purse. Again: more takers than makers.

This might be true if the world were, in fact, divided into makers and takers. But, of course, it’s not. There is a group that far outnumbers either of these and it’s this group the Republicans have failed to reach: the workers.

For every entrepreneur who wonderfully creates six jobs, there are six guys and girls who set their alarms every morning and show up to do those jobs. They drive trucks, they hit keyboards, they make appointments, they lift boxes. When dynamic movers and shakers dynamically gather in the boardroom and act dynamic, they’re outside in the cubicles, or in the storeroom, or in the halls vacuuming the carpet. And they’re struggling. To raise children without a spouse. To keep their homes. To pay their bills.

In the old days, they had marriages and went to church and believed in the verities and could be reached by way of their values. But that is not so true anymore: a lot of them are not married and don’t go to church and have never even learned what the verities are. And, yes, that’s part of the reason they’re in trouble — and it’s something that must be addressed long term — but it doesn’t make their current difficulties any less and it doesn’t make them any less our neighbors, fellow citizens and children of God.

Now, before you say something in your comments you’ll regret — or should regret — this is not to endorse the freedom-killing and economy-destroying solutions of the left, which only create a nation of rulers and dependents. Barack Obama has been a disaster for the poor and the working class and, I believe, will continue to be so. But to pat a worker on the head with your cigar hand and say, basically, “Don’t worry, little man, an unfettered market lifts everyone,” is not going to win you his confidence or his vote. Reagan never did that. (Read the excellent WaPo piece by AEI’s Henry Olsen at the link.) Reagan always stood up and spoke up for the little guy. He identified with him and explained why his policies would help him. Many of today’s Republicans have lost that knack and given the game away in the process. That’s why the polls showed people shared Romney’s values but thought Obama cared about “people like me.”

It’s largely conservative policies that help the working guy and girl, but you have to let them know that and make sure they understand that government cares about them and will not abandon them if they fall off the bottom rung of the ladder. When one candidate is saying, “Tax the rich,” and the other is calling half the people moochers, both are wrong…  but only one will win an election. We already know which one.