There’s an old saying about shooting the messenger: Don’t.

Twitter, however, has chosen yet again to do the terrible, awful, no good, very bad stupid thing by suspending journalist Greg Piper.

Piper’s thoughtcrime? He shared a story that correctly noted the CDC’s own guidance that “Vaccines are not safe for everyone.”

The CDC adds that “some people should not get certain vaccines.”

If I was feeling snarkier this morning, I’d add a “Well, duh.”

The CDC published these things because they’re true, and not just for the various COVID vaccines. Every parent who isn’t an anti-vax …eccentric… has heard the warning from their pediatrician. Every adult who’s gotten a flu shot or a shingles vaccine has been given similar advice.

Even my vet gives the same warning every time I’ve had to get one of my many dogs vaccinated against rabies and what have you.

There isn’t even anything remotely like a second side to this non-issue: Vaccines, like any beneficial drug or treatment, may come with risks for some people, and for some of those people, the risks aren’t worth it.

Left-leaning legal scholar Jonathan Turley — who has been a fierce advocate of civil rights against Democrat encroachments — reminds you:

Even if Piper’s posting is controversial, the suspension is another example of Twitter enforcing its own corporate view of “the truth.” It will not allow anyone to debate or discuss opposing views on such subjects. If Piper’s positing is misleading, then allow others to rebut or refute the posting. 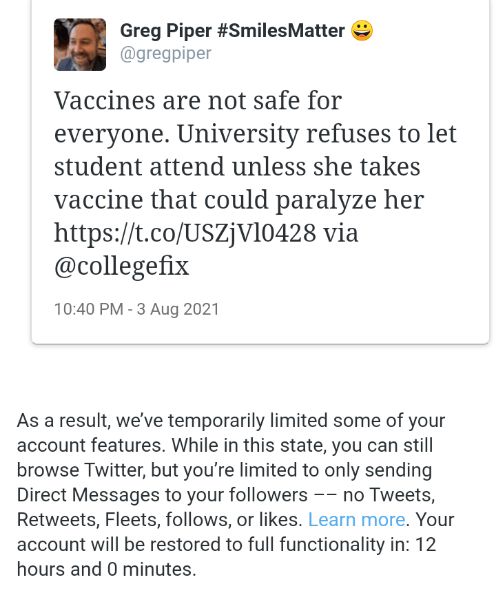 It’s safe to suspect that the explanation is pure party politics.

Piper, you see, currently writes for the right-leaning Just the News. Before that, he was an editor for The College Fix, which regularly reports on progressive insanity on college campuses.

Had, say, Slate or HuffPo published an article similar to the one Piper shared (don’t worry — they won’t), it’s easy to imagine Twitter letting the matter slide.

But because social media and the mainstream media relegate free and informed debate to right-leaning sites like Just the News, College Fix, and PJ Media, Piper had to be silenced.

If you’re still using that platform — or its twin-sister-in-censorship, Facebook — why?

I'm back up! Thanks to everyone who shared my Twitter suspension for reiterating CDC guidance. Appeals are rarely resolved in less than a few days. @JonathanTurley @VodkaPundit @JustTheNews https://t.co/2luViwId78

Good news — Piper got his account reinstated, and quickly, too.

Apparently, all the bad press got Twitter to change course in hours instead of days, and if I contributed to that in some small way, let’s all of us take that as a lesson in how to fight back against social media censorship.

Steve launched VodkaPundit on a well-planned whim in 2002, and has been with PJ Media since its launch in 2005. He served as one of the hosts of PJTV, a pioneer in internet broadcasting. He also cohosts "Right Angle" with Bill Whittle and Scott Ott at BillWhittle.com. He lives with his wife and sons in the wooded hills of Monument, Colorado, where he enjoys the occasional adult beverage.
Read more by Stephen Green
Tags: SOCIAL MEDIA TWITTER CENSORSHIP