If celebrities ritualistically debasing themselves for the sake of a progressive cause could save the world, then the two minutes of “I Take Responsibility” you’re about to see could erase all of mankind’s sins and restore us to a state of grace.

But these are actors, so what you’re really getting is celebrities pretending to ritualistically debase themselves for the sake of moral preening. What you’re about to see will either cause you to belly laugh or give you a belly ache.

Or maybe both. It’s just that much.

Better yet: Don’t watch it. As a highly-trained (not really) and highly-paid (way not really) internet pundit of some (ill) repute, it’s my job to watch these preening celebrities so that you don’t have to.

Let me spare you and give you the rundown instead.

But if you insist, here it is.

We start with actress Sarah Paulson, whom you may or may not remember from Studio 60 on the Sunset Strip, which was an unfunny TV show about a sketch comedy show that was also not funny. Paulson has her hair pulled back tight, which signals to you that she’s not going to sully her Very Important Message with any Hollywood glamour. In case you didn’t take the sledgehammer-style hint, she’s also wearing her ugliest Serious Glasses. Paulson looks all doe-eyed for the artsy black & white camera and says, “I take responsibility.”

From there the action, as it were, moves to Breaking Bad’s Aaron Paul looking very dramatically into the camera lens and also saying, “I take responsibility.” You can tell he’s taking his responsibility very responsibly because he starts with his face pressed into his steepled fingers, as though deep in prayer and thought about his deeply held responsibilityness.

Third up is someone I nearly recognize from something, but not well enough to positively ID her. Whoever she is, she has her chin down in submission, and her voice at its most serious, and her hands crossed in front of her heart. Or where her heart would be if it jumped up a few inches to make it into the frame. So there’s no doubt that when she says, “I take responsibility,” that she’s taken it to a whole new level.

And that’s just the first nine seconds of a 122-second video.

Kristen Bell appears at some point to responsibly take her share of the “I take responsibility” responsibility, but all I could think was: “I watched all four seasons of The Good Place and this is how she thanks me?”

Celebrities, man. Ingrates, all of them.

From there, things get worse, with actors and other nearly famous or formerly famous celebrities whom you think you might know or possibly once knew, making very sincere, if oftentimes outrageous and/or totally fake claims about race relations.

Then there’s the website, which if anything is even more starkly pretentious than the video. If you go to ITakeResponsibility.org (don’t), the site demands that you genuflect before the Progressive Gods before being allowed in to gawk at the celebrities. 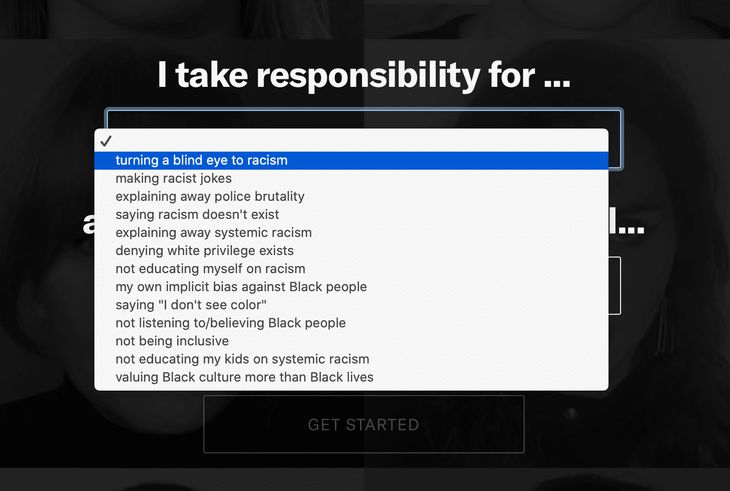 I Take Responsibility for Making You Cringe

But confessing your sin is not enough.

Next, you must pledge what action you’ll take, and a bunch of Hail Marys is not on the list.

You may either promise to “demand for [sic] police accountability,” or “support organizations on the front lines,” or “donate to families afflicted,” or “mobilize voting efforts.”

Then, and only then, will you be granted grace enough to go to the organization’s Donate page. Give generously, because “health, safety and resiliency exist without police of any kind.”

The site and the video are the work of a left-wing organization called Campaign Zero, whose primary goal seems to be the elimination of the “broken windows” policing that did such wonders for New York City under Mayor Rudy Giuliani.

But back to the video.

Here’s a pro-tip for our preening celebs: Wearing makeup designed to look like you aren’t wearing makeup and saying “I take responsibility” with as much earnestness as your acting classes could help you muster is not in any way taking responsibility.

If these celebrities want to get serious about what’s wrong with our country, maybe they could spend a few days living in CHAZ to get a preview of our glorious socialist (and cop-free!) future.

UPDATE: I almost missed the best part, the part that proves the producers understand what a craptaculent thing they’ve created.

Here is the comments section from the video’s YouTube page:

“I take responsibility,” sure, but no gruff from you proles.