Everybody knows you never go Full Karen, but that didn’t stop Mika from launching what she must have thought was an epic rant against POTUS this morning.

.@twitter need to know why trump is not banned?

I dunno. Maybe because he’s president of the United States, has 80 million followers just on his personal account, and is one of Twitter’s most valuable users?

But she wasn’t finished. Not by a long shot.

I will be reaching out to head of twitter about their policies being violated every day by President Tump. Hope my call is taken. Please retweet if you agree

What seems to have set Mika “Karen” Brzezinski off is the recent news that the U.S. now leads the world in COVID-19 infections, thanks in large part to Democrat-run states like New York, Pennsylvania, and New Jersey in the northeast.

I realize that it’s uncouth to remind people that “hero” governors like New York’s Andrew Cuomo are directly responsible for thousands of deaths, after forcing COVID-19 victims into nursing homes right alongside the country’s most vulnerable.

But Brzezinski needs reminding because apparently she’s so rattled by the poor service she’s received that she hasn’t been getting enough sleep.

I’m going to bed. Wacky day. I thought I heard the President say he took that dangerous drug that is not approved and could cause heart ailments — this just can’t be the case. Must be a lil tired #Hydroxychloroquine

Trump is taking the antimalarial drug hydroxychloroquine as a prophylactic measure against Wuhan virus exposure under his doctor’s supervision.

But everyone knows — well, every Karen or Kyle knows — that the very best medical supervision is received from a thousand miles away by highly trained TV news personalities.

That aside, Brzezinski might have been more than “a lil tired” when she tweeted those words on Monday evening, apparently having been too completely exhausted to remember a few helpful facts about hydroxychloroquine. 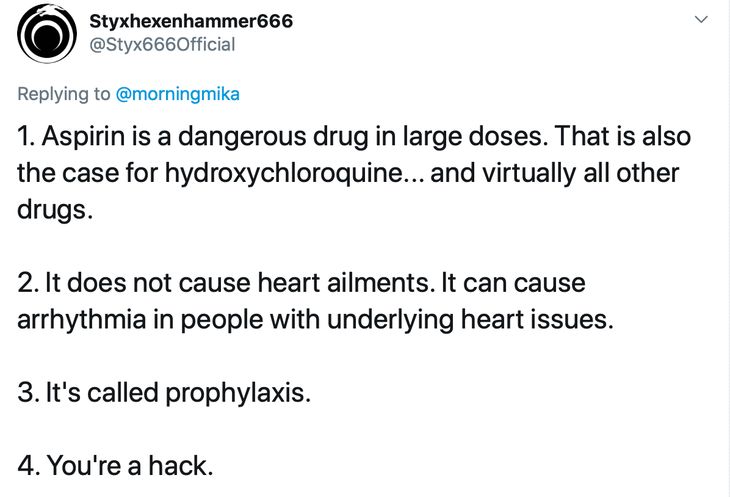 If the first thing you want to do on a lovely spring morning is to tell someone else exactly how to run his company, you might be a Karen.

It’s almost enough to make you feel sorry for Twitter CEO Jack Dorsey, who woke up this morning to the sound of Karen demanding he eliminate one of his sometimes struggling company’s profit centers.

.@jack At what point is @Twitter a part of this? TAKE DOWN TRUMP’s ACCOUNT— the world world be safer. Retweet if you agree

I said almost enough to make you feel sorry for Jack, who has apparently agreed to hear Karen’s… er, Mika’s… complaint.

Or should we feel more sorry for him? When the action is Blue on Blue, it’s so difficult to choose sides. “It’s a pity,” Henry Kissinger quipped about the Iran-Iraq War, “both sides can’t lose.”

In a perfect world, maybe Dorsey and Brzezinski would have to spend all of eternity together on a Zoom videoconference. In a better-than-perfect world, Trump would photobomb their Zoom conference every few minutes.

Red Pill Twitter has been having a blast at Brzezinski’s expense.

Censorship is not a good look unless you're a Fascist.

Well, if the jackboot fits…

Speaking of censorship, not everyone disagrees with Brzezinski. Some want to silence entire news outlets in addition to Trump.

Never mind, Twitter, Mika. The real danger to our democracy is Fox News and the Murdochs. Have the FCC yank their license and their viewers will be forced to think for themselves, if that is even possible.

Years ago at the old Vodkapundit.com blog I wrote, “The toes of the self-righteous were made for stepping on.”

Those words get truer every day.

She’s got the manager on the phone guys, this is SERIOUS

“Silence speech I dislike.” -person who makes living from speech

As of this writing, Zbigniew’s quote rests atop several instances of Mika spamming nearly a dozen other Twitter users with an anti-Republican video titled “Heroes of the Pandumbic.”

You can’t make this stuff up.

And when you’re dealing with bossy Karens with TV shows like Mika Brzezinski, you don’t have to.