China’s Communist government in Beijing has ordered 108 million people into lockdown as the deadly Wuhan virus breaks out again, this time in the country’s northeast. That’s about one in twelve mainland Chinese.

China’s Communist Party chief Xi Jinping had claimed back in March that the People’s Republic was winning its “people’s war” against the Wuhan virus, but a recent leak from a Chinese military-run university indicates that the country may have at least 640,000 COVID-19 cases.

That is, shall we say, somewhat more than the 82,929 COVID infections that the mainland government will admit to.

If accurate, the 840,000 figure indicates that as many as 50,000 mainland Chinese have died from the Wuhan virus, or ten times mainland China’s official figure. A renewed outbreak in the country’s northeast is a sure sign that the Communist government was lying back March when it claimed to have contained the outbreak.

Far from containing the Wuhan virus, some believe that Communist China purposely infected the world through unrestricted international travel, while forbidding residents of Hubei province, the source of the infection, from domestic travel to other parts of China.

Among those is Yours Truly and (more importantly) President Donald Trump’s trade advisor, Peter Navarro.

Here in Colorado, the number of COVID-19 deaths shrank in recent days. Beginning last Friday, the state’s Department of Public Health and Environment announced that it will “differentiate between coronavirus deaths caused directly by COVID-19 and those in which the person had” the Wuhan Virus, but didn’t die from it.

That’s according to Colorado Politics. Kirk Bol, the department’s statistics chief, told CP that “We would emphasize that COVID-19 should not be reported on the death certificate if it did not contribute or was related to the cause of death.”

The result? The previously reported figure of 1,150 COVID-19 deaths declined to 878 — a decrease of 24%. Extrapolate that figure nationwide, and the Americans might have suffered fewer than 70,000 deaths to the Wuhan virus, rather than the reported 89,000.

China’s Xi Jinping Gets a Warning from Donald Trump

Georgia, where they’re reopening sooner and more quickly than other states, hasn’t seen a spike in Wuhan virus cases. Early reports claimed that the state actually saw a decline as people ventured out again, but those were apparently based on incomplete data.

Still, a spike in COVID-19 hospitalizations would be impossible to miss, and Georgia hasn’t yet seen one.

All this is more evidence of what I wrote on Friday, that the Wuhan virus, “while extremely infectious, is far less deadly than millions have feared.” Absent a vaccine, Communist China’s Wuhan virus is here to stay, but it doesn’t kill in numbers large enough to justify locking down the entire U.S. economy.

Also, since the vast majority of COVID-19 victims belong to known risk groups, protecting the vulnerable minority could be safely accomplished. That’s assuming that the New York and Pennsylvania state governments won’t go back to shoving the infected into nursing homes.

Azar said, “The American population is very diverse … It is a population with significant unhealthy comorbidities that do make many individuals in our communities, in particular African American, minority communities particularly at risk here because of significant underlying disease health disparities.”

Urban areas, which skew less white that rural and suburban America, are also more at risk due to population density, reliance on public transportation, and higher poverty rates.

The situation is worse in China. A Second World public health system also has to deal with much higher numbers of smokers and notoriously polluted air, both of which contribute to respiratory comorbidities. Complicating things further are mainland China’s unreliable (I’m being generous here) domestic producers of personal protective equipment.

If Beijing is shipping defective goods to First World customers paying hard currency, I’d hate to think of what kind of shoddy goods a typical citizen of the People’s Republic has to contend with.

I suspect that given what we’re seeing in rural and suburban America, versus China’s renewed outbreak, that behind the Wuhan virus is another Red State/Blue State divide, as a look at this chart reveals: 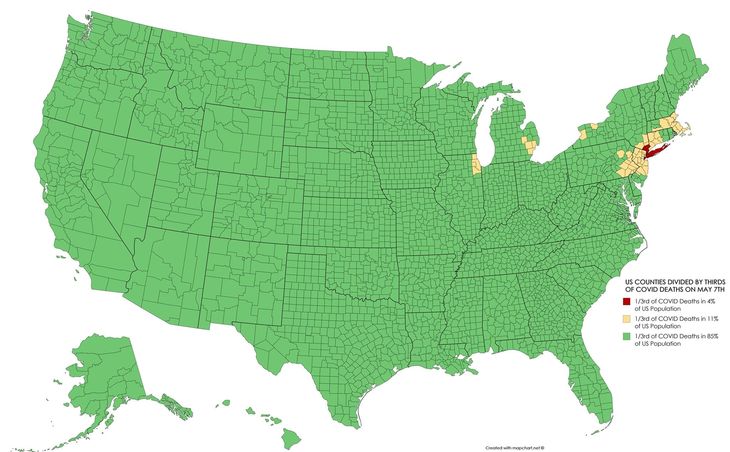 One-third of America’s Wuhan virus infections are in the red area in and around New York City. Another third are in the yellow area including the Boston-Philadelphia corridor, Detroit, and Chicago. The green area — representing easily 90% of American territory — is the last third.

Communist China, densely populated like New York City along its entire coastal industrial and trade areas, might have to endure many more Wuhan Virus lockdowns.

For rural and suburban America, however, it’s time to get back to work.