The End of the World Edition

Back in the day, I earned myself some indescribably (and possibly illegal, and certainly unbiblical or at least unsavory) sex for cooking dinners only half as good — and twice as much work — as the one I’m about to share with you. And if I didn’t just get your attention, then please call the undertaker, because obviously you’re already dead and have somehow failed to notice.

A Completely Decadent Steakhouse Dinner Made Easily at Your House

Stole this one from Ina Gartner, discovered it was over-seasoned and made the appropriate adjustments. It’s a recipe in three parts. Start with the french fry recipe posted way back in 2005, because they’re time intensive, but oh-so-worth-it. If not, just get the Ore-Ida Fast Food Fries at the grocery store. They’re pretty good.

Then you’re going to make this cheater (blender — no hand-whipping over a double boiler) hollandaise recipe from Epicurious, only you’re going to replace the tablespoon of lemon juice or vinegar with a tablespoon of tarragon vinegar. And thus make cheater béarnaise. It’s an easy recipe — Melissa or I can whip it up in less time than it takes the steaks to cook and rest. Just make sure the butter is hot straight out of the microwave, or your sauce will break.

Now we get to the good part.

Pat the steaks dry with a paper towel, then brush both sides very lightly with vegetable oil and season with the salt & pepper. (Ina suggested using twice and much S&P and seasoning both sides and the edges, but I’m not kidding when I tell you our steaks were completely over-seasoned.) Let sit.

Put the skillet on the stove — only cast iron will do for this one — and turn the heat up to high. Let that puppy heat up for at least five minutes. If it’s not smoking, it’s probably not hot enough.

Sear the filets on both sides for two minutes. Then sear the edges for the same amount of time. Oh, and if you didn’t feel like waiting around for the butcher to custom-cut your filets that thick, and just went ahead and bought the 1-to-1.5-inchers they had pre-cut, don’t worry — I do that sometimes, too. But reduce the cooking time to 90 seconds per side.

Turn off the heat, drop a pat of butter on top of the steaks, and put the skillet straight into the oven. If you’re using the skinny steaks, leave them in for five minutes. Cooking the fat filets? Make it eight minutes.

When the steaks are done, take them off the skillet and onto a plate. Cover the plate with the foil and let rest for five minutes. Now would be a good time to french your fries and finish up the blender béarnaise. Toss a small salad if you like, but that’s totally optional. We’re not making this meal for our health. When the steaks have rested, put them on plates along with a handful of fries and a little ramekin of sauce.

And this is what I call dinner. 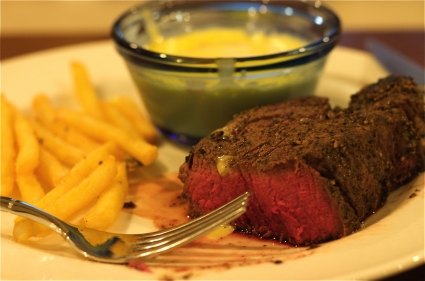 Serve it with the biggest damn Cabernet you’ve got tucked away for a special occasion, because this is it.