John McCain and the Last Crusade

This is my sixth presidential election, and for the first time ever I have no idea who to vote for. I suppose I could have lived with Mitt Romney, but he’s out. I could feel comfortable — if not exactly enthusiastic — about Barack Obama, except for two important issues. First, he’d be too weak on Iraq and too tough on shaky Pakistan. And his newfound economic populism on trade is a deal-breaker. Hillary Clinton I’d trust more than Obama with national defense, but her threat to “revisit” NAFTA and other trade agreements, again, is a deal-breaker for me.

So that leaves us with John McCain.

I won’t waste your time revisiting McCain’s sins, but they’re legion. What I worry most about him isn’t any particular issue, but his temperament. McCain reminds me sometimes of a conversation I had with my grandfather back in 1988, when he was something of a bigwig in the Missouri Republican Party. During that year’s primary, he was working hard for George H.W. Bush. “Why Bush?,” I asked. “Why not Dole?” (I was a Pete DuPont man, myself.) 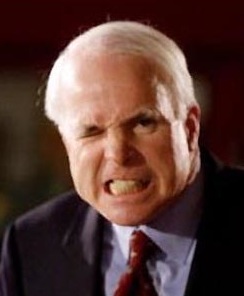 “Because Dole is psychotic. I don’t want his finger on the button.” Those were his exact words. I’ll never forget them. And McCain makes me think of those words every time he gets angry. And that’s just the McCain we see in public.

The good news is, the Cold War is long over, and odds are lower than ever for global thermonuclear war. But odds are much, much greater that someone, sometime in the next decade or so is going to nuke an American city. I’m not sure I want McCain determining our response to that attack.

The other good news is, such an attack is still unlikely — and even less likely before the end of a four-year McCain Administration.

The third bit of good news is, McCain is already like a 117 years old, and probably wouldn’t serve a second term.

To be blunt, callous even, it wouldn’t be surprising if McCain was unable to finish even a single term.

By all of this I mean to say, McCain’s pick for vice president might be the most important decision any nominee has ever made. If he picks the right person, he might just get my vote.

Wrong person: Mike Huckabee, or any other socially or “compassionately” conservative idiot. We’ve had quite enough of that the last eight years. And at least with Clinton or Obama, I can count on 56% less annoying sanctimony.

Right person: Fred Thompson, or any other principled federalist who understands there’s a war on. This is a short list. Tom Coburn would make the cut, too. So would Duncan Hunter. I’m at a loss to think of another.

I’d-have-to-think-about-it person: Rudy Giuliani. I like Rudy’s foreign policy, but he can be tiresomely combative on the home front. And he makes McCain look like a dreamy absolutist on the First Amendment. Rudy also has terrible taste in advisors — a Giuliani cabinet might make me long for the days of Janet Reno and Warren Christopher.

In 20 years I never once cared who any candidate selected for their veep. This year it might make all the difference in the world — maybe literally. McCain has a lot of people to pick from, but few good choices. My advice?

Random Thought: What are the Nutroots going to do with themselves when Bush transfers power all legal-like next January? And what will they do if he hands the reins over to a Democrat? Will they take to the streets protesting the lack of fascism to protest?

UPDATE: Jules Crittenden replies, and I respond back.