Joe Biden is cutting off supplies of a medical therapy that helps people fend off COVID and keeps them from going to the hospital and possibly dying. Monoclonal antibodies are a man-made therapy to fight off the COVID infection.

You’ve got to hand it to Biden: Cutting off likely life-saving medication is one way to ingratiate yourself with your voters. Yeah, that’s the ticket.

This week, his minions in public health decided to cut off – “pause” was the word they used – the allocation of certain monoclonal antibodies to the states using them. 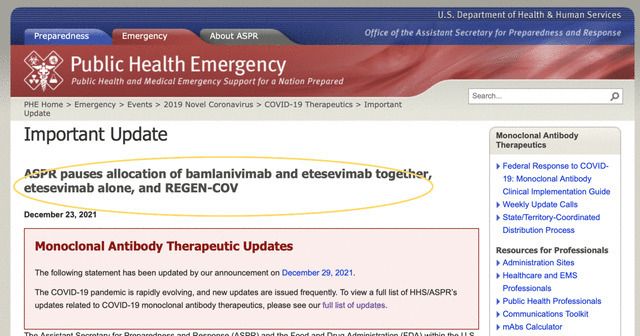 And that’s not nothing.

The operator of two Maryland monoclonal antibody clinics, Dr. Ron Elfenbein, told Fox News that Biden is killing people by cutting off supplies. “I am as angry as I possibly can be about this. I don’t know how many people throughout the country are dead, dying, in the hospital, or about to be hospitalized because of the mistakes that they just made,” says Elfenbein. He laments, “I had to turn friends away, family, people call me, ‘Oh, my uncle has cancer. Can he get an infusion?’ I’m like, ‘I cannot give you an infusion because I will lose my medical license.'”

And, of course, Biden and the guy really calling the shots, National Institutes of Health mainstay Anthony Fauci, have already attempted to cut off another state, Florida, because their monoclonal antibody clinics have kept people from going to the hospital. Biden and Fauci have staked the entire pandemic plan on forcing people to get the experimental COVID shots. If therapeutics work, people won’t get shots. The result? You’re dead to me, says Washington, D.C.

Florida Governor Ron DeSantis began buying additional therapeutics directly from pharmaceutical companies, and more than 10,000 Floridians had taken advantage of them by last August, but he believes getting cut off by Biden and Fauci isn’t actually helping, you know, public health, saying the real motive is clear for all to see. “They really want to control people’s behavior,” he told Fox host Dan Bongino.

Texas Governor Gregg Abbott has been at the pointy end of Fauci’s pitchfork as well. In September, Biden and Fauci cut off Texas from monoclonal antibodies after podcaster Joe Rogan announced he’d used them, as well as other therapeutics, after contracting COVID. He was better in four days and now has natural antibodies. The state has run out of the therapeutic to treat people with the Omicron variant.

Abbott says “Biden screwed up” with this wholesale cutoff.

A Maryland doctor had to cancel potentially life-saving monoclonal antibody infusions for 250 people after the Biden Administration stopped distributing treatments made by Regeneron and Eli Lilly.

Same is true in Texas & across U.S.

This is an odd turn of events considering that Biden discovered just this week that he could do bupkus about COVID on a national basis and that he was leaving it up to governors. And then he pulled the rug out from under them.

For answers about his latest move, you might be better off asking Biden’s new trade-in dog what his pandemic plan is.

In more ways than one, it turns out.

The Biden administration says it’s cutting off the states because the Omicron variant is dominant and monoclonal antibodies don’t work as well with the weaker variant.

But it turns out that the CDC goofed on the percentage of COVID-positive tests of people with the weaker Omicron variant, as Fox Business host Charles Payne pointed out, asking, “what the heck is going on” at the [CDC]? “We were told on Dec 18 Omicron was 73% of all Covid19 cases but the real number was 22.5%. Now apparently 58.6% What is driving decision-making there? None of this engenders confidence.”

What is driving decision-making there? None of this engenders confidence. https://t.co/ynEQ2nhnse

Fox News reported, “the Assistant Secretary for Preparedness and Response halted the allocation of those two antibody treatments last Thursday amid the rise of omicron,” but, “the delta variant, which Regeneron and Eli Lilly’s treatments are effective against, was actually responsible for 77% of all new cases when the federal government stopped distributing those antibody drugs.”

Aren’t those science-y guys at the CDC supposed to be able to do math?

And, the question is, if monoclonal antibodies don’t work against omicron but then again they were wrong about the numbers, don’t you still give states the therapeutics to fend off the other variants? Why ration them if you’ve got plenty?

"In Texas … sites have completely run out of Sotrovimab and have no choice but to wait without recourse because [HHS] has taken full control of the supply chain."

Yet the Biden admin has refused to be transparent about its monoclonal antibody rationing.

It's time for ANSWERS! pic.twitter.com/kh78WyQWfy

Florida Surgeon General Joseph Lapido told Fox News that Biden and the feds are “actively preventing the effective distribution of monoclonal antibody treatments in the U.S.”

It appears the Biden/Fauci plan is to starve states of the therapeutics to force their people into getting the only therapeutic they want to push: the shot, whether it works or not.