The jury in the Kyle Rittenhouse trial finished the third day of deliberations, and the tea leaves show that there is a disagreement between jurors on a case that is clearly self-defense. At least one person on this jury seems to want to make Rittenhouse pay for taking the lives of others — though it’s clear they attacked him.

What the jurors appear to be hung up on is the thin vestige of a scintilla of a chance that Kyle Rittenhouse, by dint of supposedly pointing his weapon in a fuzzy video, somehow “provoked” the deadly attack by Joseph Rosenbaum, the first man the teen shot on August 25, 2020. People who may not want Rittenhouse to go free for defending himself, which resulted in two men killed and one man wounded, may want to grasp this theory  and this “evidence” to get Rittenhouse on something so he’s not set free.

Trial watchers believe the jury forewoman is the hold-up. She asked to see the drone “Hocus Pocus out of focus” video as well as surveillance video taken by an FBI fixed-wing aircraft that was spying during the riots. 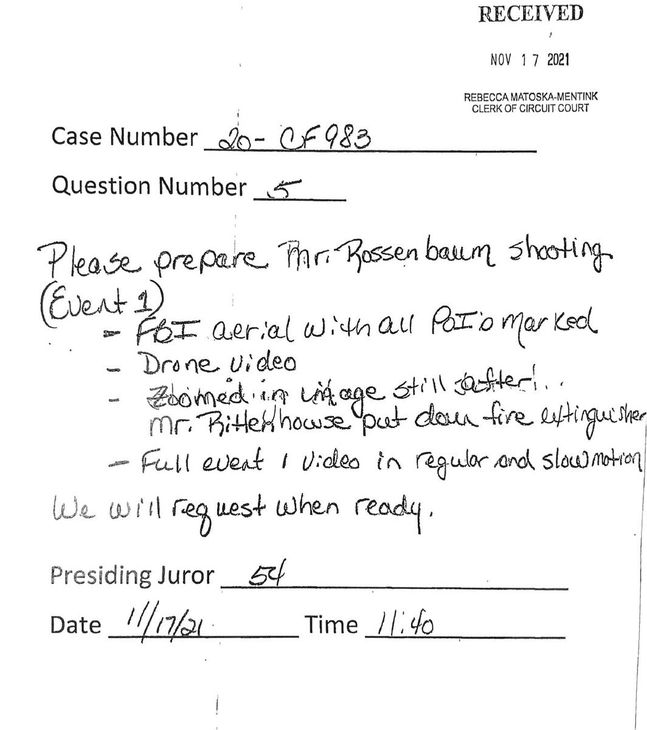 The prosecutor’s evidence, to the extent that you can call it that, is a fuzzy video of an alleged provocation of Joshua Ziminski, the man who helped Rosenbaum corral Rittenhouse that night during the riots. Ziminski and his wife called for the mob to kill and “cranium that boy” after Rittenhouse shot a lunging Rosenbaum, who was grabbing for Rittenhouse’s gun.

Now, you might think that it would be interesting to hear from Ziminski during the trial. Gee, Mr. Ziminski, how did you somehow convey to Rosenbaum — telepathically perhaps? — that you were triggered by Rittenhouse’s “provocation”?

Ziminski, darn it all, couldn’t be called to testify  about what happened because, aw-shucks, he’s being tried at some point on all the other stuff, such as torching property that night, and his wife’s in prison. The prosecutor? You’ll never guess, but it’s the same guy trying Rittenhouse, Thomas Binger. What a coincidence. And, your honor, they have a Fifth Amendment right to remain silent. Wasn’t that nice of the prosecution to take the Fifth for his defendant?

What should have been done, of course, was to call Ziminski and have him take the Fifth to all of the questions he didn’t want to answer. Imagine if the jury had heard those questions. Defense attorneys, as they’ve done throughout the whole trial, didn’t fight for it.

Indeed, juror number 54, the forewoman,  asked to see the fuzzy video as well as the FBI video.

But that fuzzy video handed over to the defense team is at the heart of yet another motion for a mistrial in this case. Yet the judge allowed them to see it again.

The piece of evidence, derided by defense attorney Mark Richards as the “Hocus Pocus out of focus,” was a video dropped into the trial at the end.

As has happened several times during this trial with “missing” witnesses and other FBI spy video, prosecutors either said they had no idea from whence the video came, as in the case of the Hocus Pocus drone footage, or provided the defense team with a substandard version of the video, as happened in both cases of the drone footage and the FBI overhead surveillance video.

On Thursday, the third day of deliberations, Fox News showed the higher definition video (Tucker Carlson Tonight originally purchased that video from a company). Only on Wednesday did prosecutors admit that they’d known the provenance of the video all along. They’d been lying to the defense and the court. Defense investigators had also tried to get that video, but the owner of the company, which went out of business since the riots, said he didn’t have it. See the video below.

Andrew Branca, who explained what “provocation” means on the Adult in the Room podcast and who has written extensively on his The Law of Self-Defense website, explains how important this fuzzy video could prove to be.

The drone video is particularly important because it is the only evidence offered by the State to support their argument that Kyle Rittenhouse has no privilege of self-defense in this case because he provoked the attacks upon himself, and therefore the State need merely prove provocation, rather than have to disprove self-defense itself.

The act of provocation–specifically, the claim that he pointed his rifle at others, provoking Josep Rosenbaum to chase him across the Car Source parking lot–is supported by no other evidence but for this video. Without the video, then, there is no act of provocation, and the prosecution would then have the unlikely-to-win task of attacking Kyle’s claims of self-defense directly.

It was only after the video was accepted into evidence at the tail end of the trial that the defense team realized in open court that it had gotten a substandard version — a fuzzy version — of the video.

There is much chicanery going on here, and a young man’s life hangs in the balance.

After prosecutors offered every imaginable excuse for not handing over the footage, the technologically challenged judge allowed the jury to take it into evidence. OnWednesday, they asked to see it.

Defense attorneys on Wednesday moved for a mistrial for the third time.

Branca and other attorneys who watched and opined on the trial noticed something interesting as prosecutor Kraus showed the better video to the courtroom.

Interestingly, a photo purportedly of ADA Kraus’ laptop screen being projected onto the large 4k TV screen in the courtroom shows the presence of an imaging software named Handbrake. I lack any technical expertise or experience with Handbrake software, but apparently, a core purpose is to generate low-definition versions of high-definition videos. This has led to speculation that the provision of the low-resolution video to the defense was not an accident at all, but rather an intentional act of the prosecution. If so, this would be prosecutorial misconduct sufficiently grievous to not only warrant a mistrial with prejudice but certainly misconduct perhaps even malicious prosecution charges.

This trial has highlighted the free-wheeling ways in which prosecutors lie about the facts and the law before a jury with impunity. The judge claimed that — finally — “a day of reckoning” was at hand for their outrageous misconduct, but, like every other call for a mistrial, he’s waiting for the jury to weigh the evidence before he calls this outrage of a trial to a merciful end.