A fan at a Chicago Cubs game held up a sign behind home plate honoring deceased police officer Ella French, who was murdered in the line of duty on Saturday, and was promptly escorted out of Wrigley Field. Former New York Police Commissioner Bernard Kerik wondered why it was OK to hold up a Black Lives Matter sign and not a sign honoring a fallen police officer.

So, someone holds up assign in honor of a Chicago police officer shot and killed in the line of duty, and they’re escorted out of the stadium. But people can hold up signs, and players can wear shirts supporting #blacklivesmatter, and no one says a word. pic.twitter.com/G72K5GgZTm

Perhaps the hostile attitudes toward cops is the result of city leaders refusing to stand up for police officers against the opportunistic, sometimes hysterical opposition from politicians, activists, and those who excuse criminal behavior.

It’s not that the Chicago Cubs organization is anti-police. They are in the “don’t offend anyone” business. If politicians won’t have the backs of the police, why should businesses? And since a few very vocal activists in Chicago pretend to be upset by any outward show of support for the police department, the team management felt it was easier to give in and squash something as innocent as showing support for an officer who made the supreme sacrifice for the citizens of Chicago.

This attitude is not lost on the police officers themselves. So when Mayor Lori Lightfoot showed up at the University of Chicago Medical Center, the officers holding vigil for their comrade fighting for his life turned their backs on her when she wanted to make a speech. 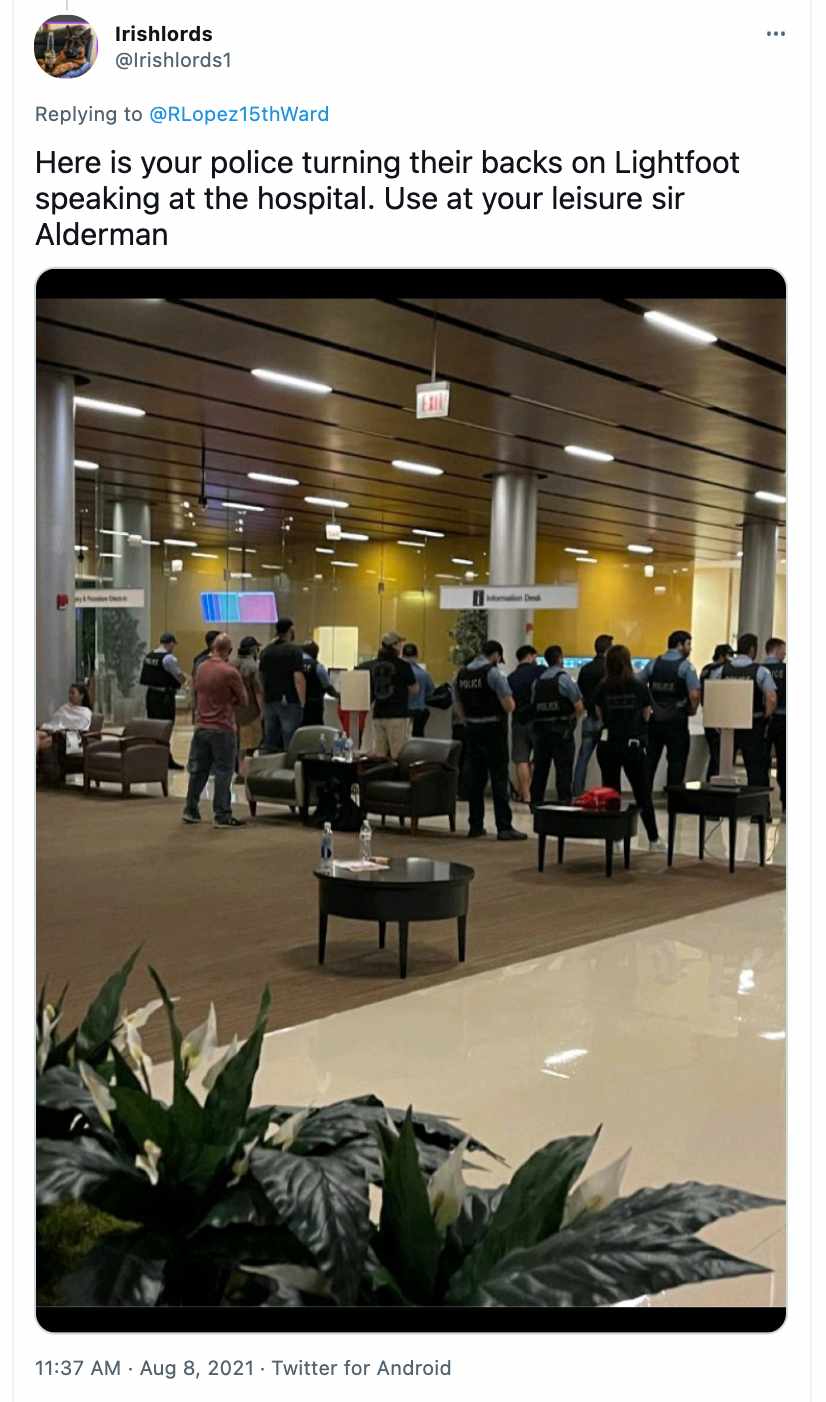 Just moments before more than a dozen officers turned their backs on the mayor, Lightfoot tried to talk to the male officer’s father, who himself is a retired Chicago police officer. He clearly wanted nothing to do with Lightfoot, according to two sources who were there.

The father excoriated the mayor and blamed her for what had happened. One source said Lightfoot handled herself well as the father yelled at her. She listened and treated him with respect.

It was then suggested that Lightfoot say a few words to nearby grieving officers, but as she approached, “they did the about-face — it looked like it had been choreographed,” said one of the sources present, calling it “astounding.”

Activists aren’t the only ones who can choreograph a protest. Besieged policemen are also more than capable of getting their point across using the exact same tactics.

For the cops, it’s all they have left—silent, smoldering protests against those who really don’t care about their lives, only about keeping peace in the city. And if that means sacrificing the lives and careers of a few police officers, so be it. The cowardly politicians see it as a small price to pay to keep the Visigoths and other barbarians from burning the city down.

Across the country in big cities, urban police are under siege from criminals far better armed than they are as well as politicians who see nothing wrong with using the police as punching bags for their own titanic failures. Hundreds of cops in New York City turned their backs on Mayor de Blasio in 2017 during the funeral for slain Officer Miosotis Familia.

To some, it may seem a useless gesture. But politicians need to be shown that their police officers will only endure so much abuse before responding.