Teen Vogue’s almost-editor Alexi McCammond was forced to resign before she even started because of racist tweets she posted years ago. It was cancel culture at its best — or perhaps, most damaging. McCammond was a writer for the left-leaning Axios website, but that didn’t save her from the rage of the mob.

One of her biggest critics at Teen Vogue, senior social media manager Christine Davitt, posted a letter on March 8 on Instagram from Teen Vogue staff expressing concern to Conde Nast management about the hiring of McCammond, “in light of her past racist and homophobic tweets.” “So proud of my @teenvogue colleagues. The work continues…” Davitt wrote in a caption.

But people who live in glass houses… etc. Davitt has her own problematic tweeting in the past.

Davitt wrote two tweets to a friend identifying him as a “ni–a,” and in 2010 used the word “ni–a” in a joke tweet. The friend appears to be White. 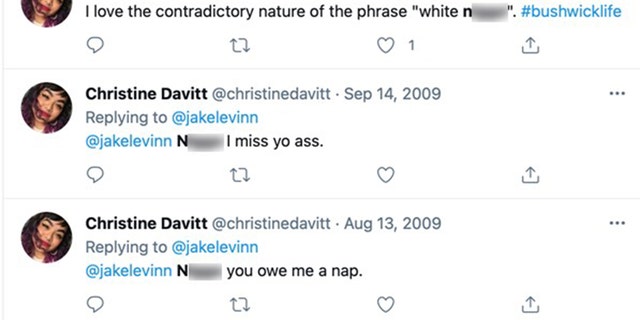 The question that immediately comes to mind is, “What will the mob now do with Davitt?” Will she get a pass for her past support of cancel culture causes and targets? Or, must she too, be fed to the crocodiles?

Teen Vogue published a story in October 2019 with the headline “Stop Using the N-Word If You’re Not Black.”

The article excoriated Latina actress Gina Rodriguez for singing the word “ni–a” in a social media post. It argued that non-Black people should never use the N-word and that people who do have an “almost competitive dismissal of Blackness.”

“There’s been much debate within the Black community about the N-word and just how much good our supposed “reclaiming” of it can actually do. And in moments like this, that feels like a valid point. But one thing that shouldn’t be up for dispute is who gets to use it. And if you ain’t Black, that ain’t you,” the article claimed.

The nauseating double standard — even among woke partisans — is alive and well. By all that is fair and right, Davitt should never work for another decent publication again. She must be blackballed, tarred, feathered, and run off the internet on the proverbial rail for transgressing against woke theology. Groveling apologies shouldn’t matter. Begging for her job will only make the mob howl louder.

So, what will it be, Mindless Mob? Do 10-year-old tweets really count as much as if they were tweeted yesterday? Perhaps the tweets from 2010 were posted in a different era, a not-quite-as-hypersensitive-about-race era? When context doesn’t matter, everyone will eventually get canceled.

When cancel culture comes for one of its own, there is a deep, abiding satisfaction to be had. Sitting back and marveling at the stupidity of it all can be entertaining, depending on whose ox is being canceled.

I could really use some popcorn right about now.

Disney Fired Gina Carano for a Holocaust Post. What About Pedro Pascal?

Cancel Culture Claims Another Scalp at The New York Times

Cancel Everyone! SPLC Wants to Decimate the Conservative Movement