[WATCH] Deranged OH Dems Jeer, Bang Desks Over Trans Athletes Ban. But the Rep Who Kept Her Cool Got the Last Laugh

In one of the more disgraceful stunts you’ll ever see in a legislative chamber (it’s a very low bar, I know), Democrat lawmakers in Ohio thew a childish temper tantrum, attempting to drown out a female Republican representative as she introduced an amendment that would protect girls’ sports from transgender athletes.

Rep. Jena Powell, a conservative and staunch defender of women’s athletics, was in the process of introducing an amendment to a bill that would allow college athletes to profit from their names and likenesses when the melee broke out.

“The ‘Save Women’s Sports Act’ is a fairness issue for women to be able to achieve their dreams and athletics in our state,” Powell began. “It is crucial to preserving women’s rights and the integrity of women’s and girls’ sports. Across our country, female athletes are currently losing scholarships, opportunities, medals, education, and training opportunities.” Unfortunately, some Democrats in the chamber apparently couldn’t stand to hear an articulate conservative woman defending women’s sports—and calling for a ban on biological men pretending to be women, ruining their sports, and denying them opportunities.

The amendment, attached to SB 187, reads: “No state institution or private college to which division (B) of this section applies shall knowingly allow individuals of the male sex to participate on athletic teams or in athletic competitions designated for only participants of the female sex.”

Shortly after Powell began her speech, Democrats began pounding on their desks and shouting “booo!” and “out of order!” in an attempt to disrupt her.

Here’s Rep. Michael Skindell losing his mind and embarrassing his family in public:

This is the shameful behavior of Rep. Michael Skindell at the Ohio House yesterday during the introduction of the SWS Act. These are the types of absurdities we deal with when trying to #SaveWomensSports pic.twitter.com/KktDQJ53fU

What would happen to you if you acted this way at work? Would you expect to still have a job? What if a bunch of Republicans had acted out like this? (Those are rhetorical questions. Everyone knows what would happen.)

Powell, much to her credit, didn’t miss a beat. She continued her speech, remaining composed—shooting a side-eye at the deranged Dems and an annoyed glance at the House speaker impotently tapping his gavel—as her colleagues on the left side of the aisle acted like spoiled children who didn’t get their snacks.

Ohio Rep. Jena Powell offers an amendment to add a bill banning transgender girls from female sports teams to the name, image, likeness bill. A wild moment in the House, with Democrats pounding on desks and yelling "point of order." pic.twitter.com/fB3RRelXup

#michaelskindell what a shame you are. Any women in your life should kick your —- to the curb.

Next time u see @michaelskindell, offer him a teat or a warm 🍼.
Fat bastard is obviously in need of additional soothing & comfort. 🤦🏽‍♂️ https://t.co/vRQV0wxvPo

I saw you act out on the house floor banging on tables and screaming like a child. If that's the kind of leadership you're offering then this country is better off without you. I'm a retired Navy veteran, and if you acted this way in the military you would be in the brig. Idiot

And in the understatement of the year, Jo Ingles from Ohio Public Radio described Skindell’s behavior as him being “shaken” because the bill is “unfair” to LGBTQ student-athletes. If that’s shaken, I’d hate to see him when he gets really worked up. 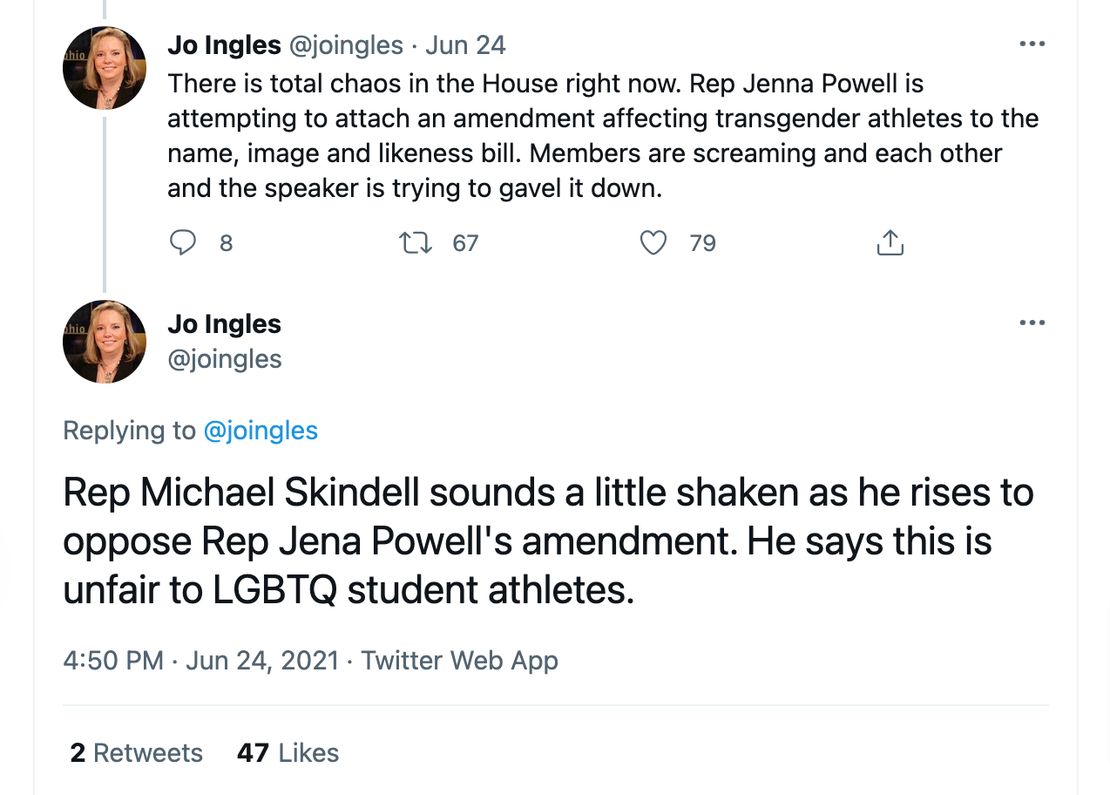 After everyone calmed down, Powell got the last laugh and won the day when her amendment passed 54-40. The House also passed the full bill, which now awaits action by the Senate.

Related: Women’s Olympic Weightlifters Should Take a Knee if Trans Athletes Are Allowed to Compete

Gov. Mike DeWine (R-CNN Star) said it would be “premature” to comment on the bill (since when does he shut his piehole about anything?). “This issue is best addressed outside of government, through individual sports leagues and athletic associations, including the Ohio High School Athletic Association, who can tailor policies to meet the needs of their member athletes and member institutions,” he said in a statement.

Except the OHSAA has been completely incompetent in addressing “this issue” and has stubbornly refused to protect young women.

The organization’s Transgender Policy reads like a bunch of talking points from the trans lobby. Here’s one example:

“Gender identity” – A person’s intrinsic sense of being male (a boy or a man), female (a girl or woman), or an alternative gender (e.g., boygirl, girlboy, transgender, genderqueer, eunuch). Since gender identity is an emotional, rather than a physical characteristic, one’s gender identity is not necessarily visible to others

(Are there a lot of high school eunuch student-athletes in Ohio? Asking for a friend.)

In order for boys to play on girls’ teams, they must have completed “a minimum of one year of hormone treatment related to gender transition or (2) demonstrate to the Executive Director’s Office by way of sound medical evidence that she does not possess physical (bone structure, muscle mass, testosterone, hormonal, etc.) or physiological advantages over genetic females of the same age group.”

The congenital differences between men and women are quite apparent to parents of male and female children, and they manifest in recognizable behavior and ability by the age of 2. The primary effects of testosterone begin to alter the fetal neuromuscular system about 8 weeks post-conception, with the testosterone levels of puberty merely finishing the job started before birth. Males are stronger, more explosive, and faster than females. This is in evidence throughout human performance, with the average women’s standing vertical jump test at 14 inches and the men’s at 22 inches. It is why we have men’s and women’s divisions in all sports, with no sport allowing direct competition between men and women. It has been apparent throughout human history that the sexes are different in terms of physical capacity and that this is true from birth, and I shouldn’t have to point this out to anybody.

How does that protect girls and women, Comrade Mike? (Narrator: It doesn’t, but it keeps the fringe minority from boycotting the state, which is more important than providing opportunities to women.)

Incidentally, this is the first time DeWine has even come close to addressing “this issue,” despite demands from constituents to protect women and preserve the opportunities afforded them by athletics.

Exit question: Why are so many over-the-hill white men obsessed with defending the mental disorder of transgenderism?