Texans Are Getting Blackout Warnings in June. Why?

Texans have been unpleasantly surprised with blackout and usage warnings from ERCOT this week. That’s the Electric Reliability Council of Texas, which was no one’s friend during the great freeze back in February. Its rolling blackouts left Texans alternately freezing and fuming but not quite enough of the latter to keep our homes warm. Many had to go without heat during the worst freeze in the state in living memory. There had been colder snaps here and there through the years, but those were local. In February 2021, the entire state froze over. That demand for heat along with human errors strained and broke the grid. It was a historic disaster in which dozens died.

Now it’s June, which we know will be hot, but we also know we’re not yet at the peak of a Texas summer. It’s hitting the low 90s now. It will top 100 in July and August. This is an immutable fact of life, at least where I am in central Texas. It’s Texas. It gets hot. Hopefully, it’ll at least burn up the mosquitoes outside. But we need A/C inside or we’ll all be living in saunas.

Not only will this dog not hunt, it won’t even get up from its cool spot under the shade tree to go get a drink of water.

June isn’t the peak of summer but we’re already getting blackout warnings saying demand may exceed supply. Texans who work from home most of the time recognize a dual threat:  if we lose power we’ll roast in our homes and we also may not be able to use our gadgets to work. Goodbye Netflix and chill, hello playing Uno and burning up.

So given the fact that Texas is blessed with incredibly abundant amounts of oil and natural gas, and we have miles and miles of plains for generating wind and solar power, what’s going on with blackout warnings in Texas in June?

As I set about researching this piece, I naturally turned to ERCOT for information. This is what I got. 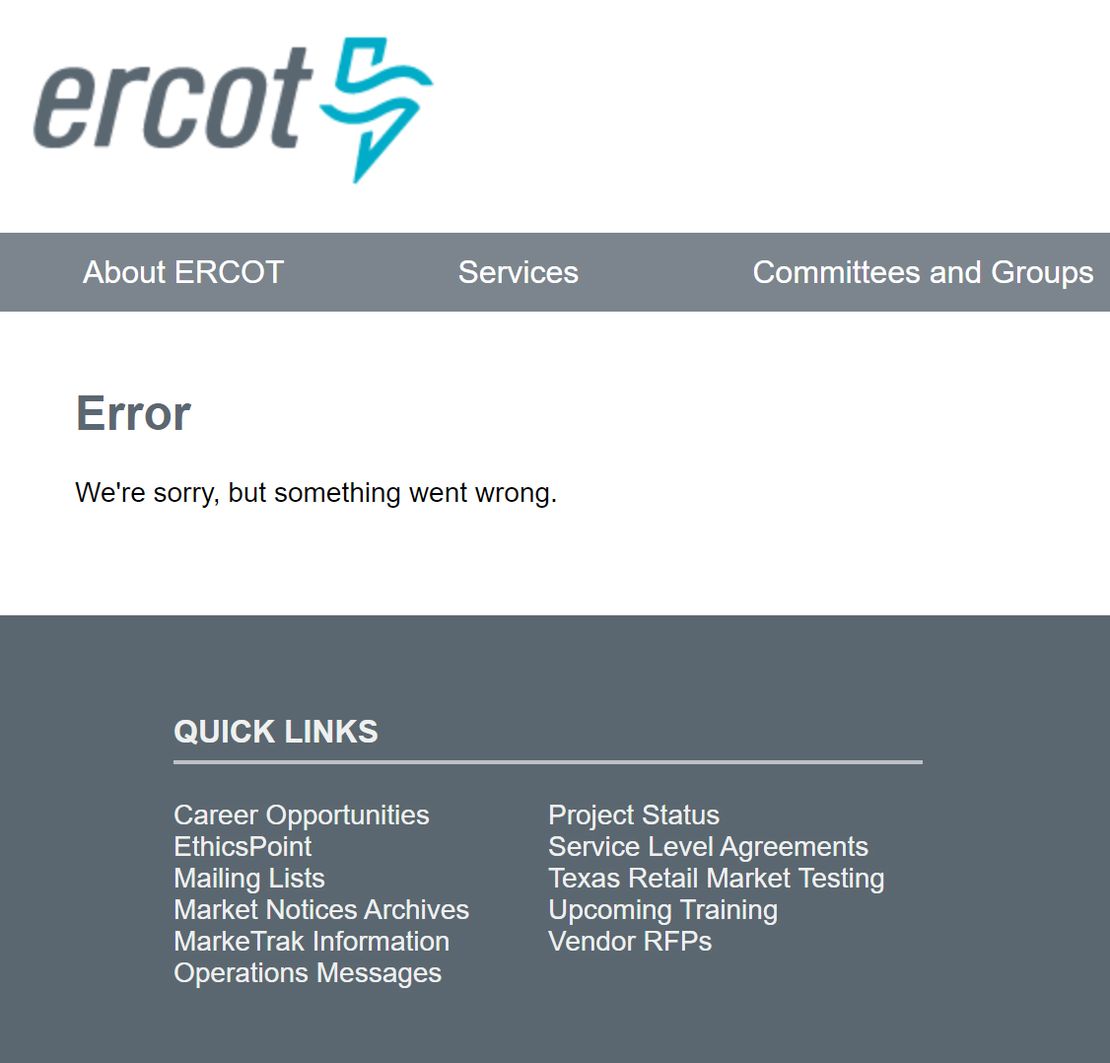 It’s not the first time, ERCOT.

Here’s the short version: Texas now has too many people using too many electric devices while its electric grid hasn’t kept pace and it’s over-reliant on unreliable energy sources.

The total power generation capacity of Texas plants and sources has increased over the past 10 years — but usage hasn’t exactly kept pace with population growth. In 2010 Texas had an installed capacity of about 84,000 megawatts (about 75,000 megawatts of available capacity) of power generation capacity across ERCOT and the various local and commercial power generators. In 2020, Texas had an installed capacity of about 89,000 megawatts (with about 83,000 megawatts of available capacity). That’s an increase but not the 20% that was needed just to keep up with population growth. The population growth, one should note, was not exactly expected. It has sped up with a lot of Californians seeking a freer life, or at least seeking a different life, in Texas. Our power grid, our cities, our highways, and our suburbs are all getting crowded.

Related: Toyota Warns (Again) About Electrifying All Autos. Is Anyone Listening?

Electric demand has exceeded generation capacity and population growth (except in the plague year of 2020). We now use more electrical devices — smartphones, computers, TVs, and so forth — than we each used 10 years ago. They’re all more efficient than their predecessors were, but there are more of them. We’re also adding more electric cars, which aren’t powered by gasoline obviously, they’re powered by the electric grid. Every car added to the electric grid adds a little bit of demand on it. And some of us are mining bitcoin, which involves using computer processors, which consume power. A lot of power.

Our favorite maverick electric car-building billionaire, Elon Musk, even banned bitcoin as legal tender for buying Teslas because — he said — bitcoin mining consumes too much energy that derives from fossil fuels.

I bracketed off the “he said” to denote skepticism. His motivations aren’t always as transparent as the skies his rockets race through on their way to space. He plays the crypto game well above my head and most other traders.

Take all of this into account, and Texas is using a lot of power. The Lone Star State stands alone as both the nation’s top energy producer and its top energy consumer. And much of the usage isn’t even residential. Texas is a heavy industry state, and a high-tech state, with the energy corridor in Houston producing and consuming lots of power, and the Silicon Prairie around Austin consuming lots of electric power while wielding a lot of social power. Texas’ image is ranches and farms but three of America’s largest 10 cities — Houston, San Antonio, and Dallas — are in Texas. Austin and Fort Worth aren’t far behind. They’re #11 and #16 respectively.

Rough back-of-the-envelope calculation: It takes the same amount of energy to build an oil well as it takes to build a modern windmill. But the oil well will produce about 10 times the energy per hour that the windmill produces. That makes oil energy cheaper than wind energy. Is there a way around this?

We’re near the peak efficiency that’s believed to be possible for wind and solar. Out of every photon from the sun that strikes a solar cell, current thinking is we can only capture about 33% of that power. We’re at about 25% now. On wind, at its maximum about 60% of the energy is capturable. We’re capturing about 45%. Both sources are energy hogs on the development side, demanding high amounts of fossil fuels to build them. We may be able to squeeze more efficiency out of wind and solar through technological development and breakthroughs, but there is a limit and we’re close to the known limit. Neither wind nor solar are very efficient over the long haul. Whether they’re actually cleaner than fossil fuels is even debatable, given the mining and toxic chemicals and processes used to make batteries and the like, and their lack of reliability. Wind and solar are never likely to be the dominant energy sources for a modern economy such as ours, at least until much more efficient battery technology is invented and found to be economical enough to go mainstream.

The smart plays are to develop more natural gas, which is cheap and burns relatively clean, and nuclear power. Nuclear can provide baseline power; natural gas can be the dominant source and it can throttle up and down to meet demand cycles. But that’s not the play the Democrats or the media favor or will even allow. They won’t even entertain the possibility.

A source in the industry put it this way: “Between the population boom and wind increasing in the amount of energy mix, Texas is currently at the tipping point where blackouts are more likely and more often.” He adds: “We should encourage alternative energy investment but we should not tip the scale to alternatives.” Austin and Washington’s policies currently tip the scale toward renewables through tax incentives and credits.

None of these words solve the Texas power generation problem. Maybe they’ll get some way toward understanding what the problem is. That problem is a lot more people, relying on a little more energy, which is a little less reliable than it used to be.