Between the border, the COVID vaccine, fiscal policy, and now travel policy, Joe Biden has managed to totally discredit his own policies in the span of just 100 days. It’s a remarkable achievement.

The border is a massive and dangerous mess, and Biden is abetting crimes there every single day including human trafficking, trespassing, grand theft auto, and more.

Joe Biden undermined millions of Americans’ confidence in the COVID vaccine when it was politically expedient for him, but has since taken the vaccine and claimed it’s a policy victory for him.

On fiscal policy? Well, inflation is on the way and Biden has already jettisoned his unbelievable promise not to tax anyone making less than $400,000.

In early 2020, President Donald Trump issued a ban on travel to the United States from China. That’s where COVID originated and was vectoring to the world from. Trump shut down the most likely source of infection for Americans. It still got here and everywhere else, of course. China allowed flights out of Wuhan after it knew the virus was loose there.

Joe Biden did what he always does — he played the dishonest demagogue. 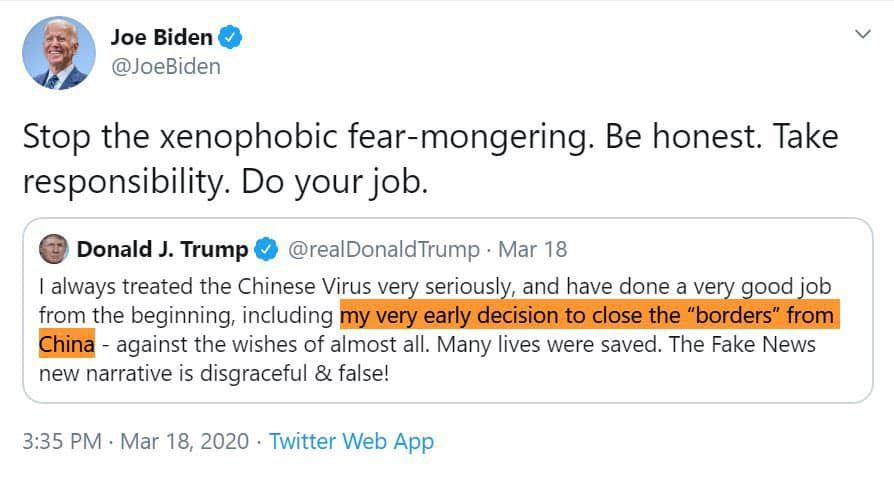 Trump actually was doing his job, on COVID, on the border, and elsewhere. Biden has yet to fulfill the oath office he took back in January. Biden was ankle-biting a leader over last year’s travel ban, which has been his MO throughout his career. Biden fails to lead, but attacks and demagogues against those who do.

A bit over a year later, India is suffering the world’s worst COVID outbreak. It’s terrible there. The United States — well, mainly the red states — largely has COVID under control. Trump’s vaccines are everywhere and freely available. Our economies are opening back up or already there (in the red states).

Guess what Joe Biden did Friday? 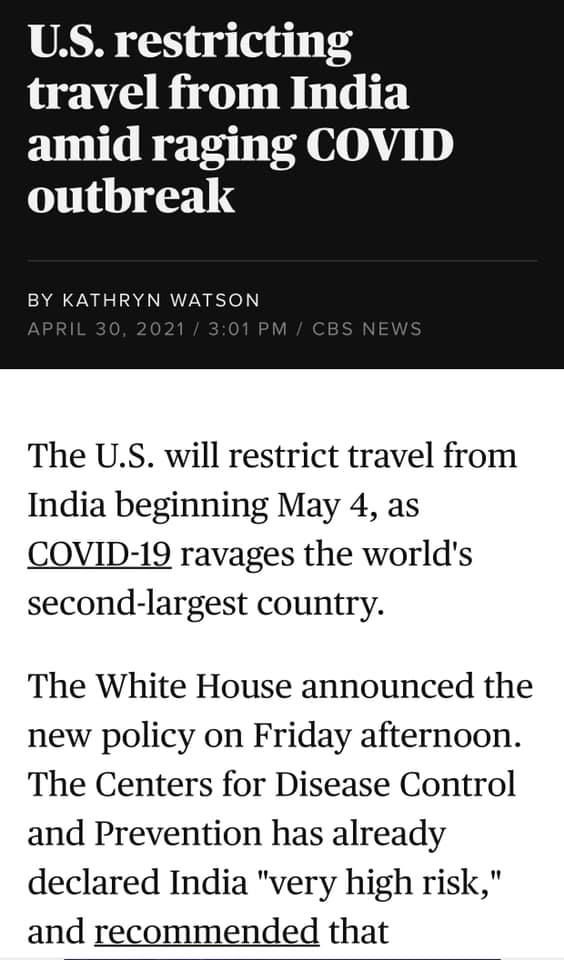 The US will restrict travel from India starting next week, the White House said Friday, citing a devastating rise in Covid-19 cases in the country and the emergence of potentially dangerous variants of the coronavirus.

The limits, which take effect from 4 May, with bar most non-US citizens arriving from India from entering the United States.

The reasoning here is nearly identical to the reasoning under which Trump banned travel from China in 2020, with the added fact that China was actively engaging in a cover-up about the virus. India isn’t similarly imperiling the world. But the travel ban does make sense from a safety point of view.

India is more and more a U.S. ally these days; Biden is owned or at least rented by China, which is hostile to India. I’m not questioning the travel ban here, just questioning Biden. Per Robert Gates, he tends to get everything wrong.

Biden bashed Trump for banning travel from China when it was clearly and obviously the right choice for Americans. Biden was wrong then, putting politics ahead of your safety and mine. He’s doing that on the border now, creating chaos and then denying anything’s wrong, meanwhile Americans suffer daily from his dereliction of duty.

Because that’s Joe Biden. He’s never been a leader. He spent most of his career being Ted Kennedy’s yapping attack dog. His own boss privately fretted over Joe’s ability to “f*** things up.” That’s what he does.

Mexico doesn’t even have a proper COVID testing regime, but Biden is allowing unfettered illegal travel into the United States from there, enriching the cartels and the coyotes at the same time he’s abetting human trafficking.

This is Joe Biden, folks.

The puppet can’t find his mask, which being vaccinated and outdoors he doesn’t even need, in his own pocket.

He’s not the only one “in trouble.” We all are.