Do They Have Teenage Girls Running the Pentagon's News Site Now?

Defense.gov, the Pentagon’s official news and information portal, appears to have been taken over by clickbait connoisseurs. After spokesman John Kirby led an off-camera press briefing, Pentagon civilian reporter Jim Garamone posted this on the site: 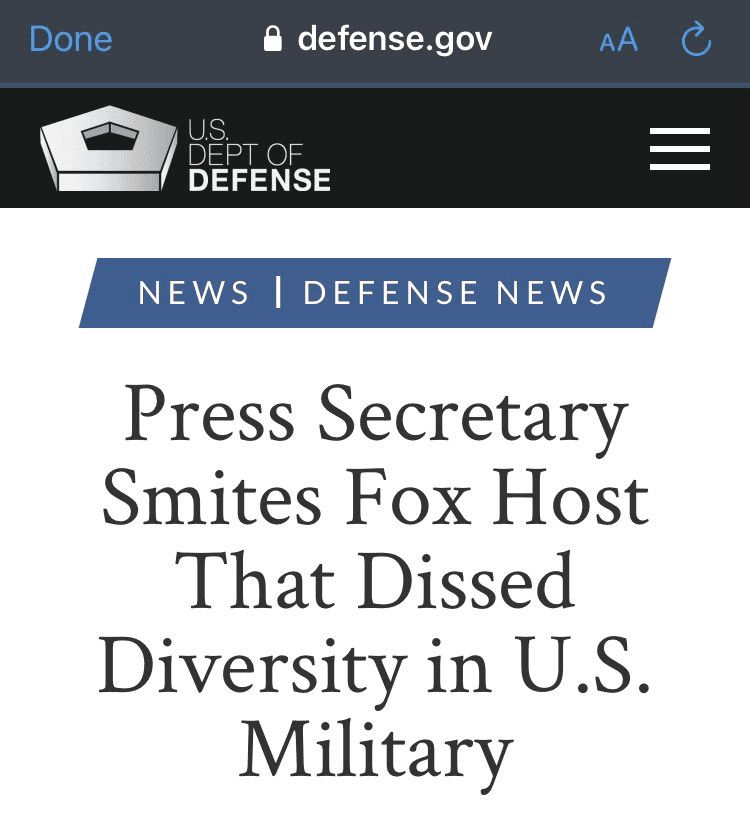 The story that follows is entirely political, as in, it’s written entirely around Kirby’s political take on comments made by Fox host Tucker Carlson on his program the evening prior to the briefing. Why Kirby felt the need to spend time in his opening remarks in the off-camera press briefing engaging in a political give-and-take is not explained. It’s evidently a core piece of the administration’s messaging, while the border is in crisis and the threat from China increases. Carlson is a talk show host. Kirby is an official at the U.S. Department of Defense. Their jobs are not analogous.

The author of the piece, Jim Garamone, has been reporting for the Pentagon for about 35 years according to his LinkedIn profile.

While I never reported at the Pentagon, I was a radio and television specialist in the Air Force for more than four years. I produced numerous field news reports around Japan and the Pacific and anchored TV and radio network news on Armed Forces Network (AFN) from regional headquarters in Tokyo. Partisan political content was expressly not allowed on our broadcasts.

Reporters reacted not by questioning why Kirby was engaging in politics, but instead asked if the Pentagon now planned to drop Fox from its programming. Here’s the transcript:

Q:  On this subject, a number of follow-ups.

Is — you haven’t mentioned Tucker Carlson by name and I am curious why.

MR. KIRBY:  I think you know who we’re talking about.  Yes, we’re referring to what Mr. Carlson said in his monologue.

My second question — two additional questions.  Does the secretary have a reaction to this?

And third, it’s my understanding the Armed Forces Network does carry Tucker Carlson’s show on your military broadcast distribution network.  Will you — there is some social media discussion that is — is opposed to the continuing carrying of that show by the Pentagon.  Will you continue to carry his show?

MR. KIRBY:  The secretary certainly shares the revulsion of so many others to what Mr. Carlson said in his opening statement.  And, yes, Tucker Carlson’s show, as well as a lot of other programming, airs on Armed Forces Network.  As I think you know, by instruction, we are required to broadcast and to make available for men and women and their families overseas the same type of content — news, information, and sports content — that their fellow citizens can get, so his show is aired on AFN.

Democrats and some in the media have been pushing to silence Fox and other networks by having them removed from satellite, cable, and streaming providers. Kirby’s remarks may have been an opening salvo in getting DoD policy regarding those networks changed.

Policy at the Pentagon’s news portal certainly appears to have changed radically since Biden’s inauguration.

Gonna be honest. This headline is unprofessional and beneath the military. Who the hell wrote this?

The DoD using the word “disses” is so cringe worthy. Trying to be hip. 🙄 pic.twitter.com/L8Pq4PmE7X

A quick review of the defense.gov website doesn’t turn up similar political, poorly-written, teen-rage-style headlines. It may not represent a pattern in the Pentagon’s self-reporting style, at least not yet. But it may be the leader of a trend.