ESPN's Chris Martin Palmer Fine With Riots and Burning Things, As Long As They're Not His Things

Life comes at you pretty fast. Chris Martin Palmer, NBA reporter for ESPN, is learning this the hard way. 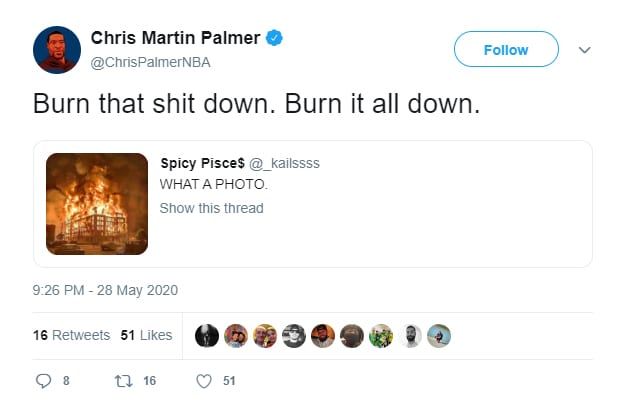 The thing being burned down belonged to people who aren’t wealthy NBA storytellers for ESPN. It’s an affordable housing complex. Palmer later deleted that tweet without explanation.

Maybe because you won’t guess what happened next…

Here’s what Palmer tweeted when the sh*t being burned down was a lot closer to his own, Saturday night.

They just attacked our sister community down the street. It’s a gated community and they tried to climb the gates. They had to beat them back. Then destroyed a Starbucks and are now in front of my building. Get these animals TF out of my neighborhood. Go back to where you live.

Palmer lives in a gated community. Isn’t that nice. He should check his privilege. Tough break about the Starbucks, dude.

Now that they’re outside his building, they’re suddenly “animals.”

Tear up your own shit. Don't come to where we live at and tear our neighborhood up. We care about our community. If you don't care about yours I don't give a shit.

What do you want to bet he called the police to have the riff raff, sorry noble protesters, dealt with?

Well, we don’t have to bet.

Welp. They're gone. Security called the cops and they swarmed. Some scattered, others were arrested. (You hate to see it.) Tense moments. There's graffiti everywhere. We live in a beautiful, safe community and have pride. These people had no pride and weren't protesters.

Wait a minute. When they were burning someone else’s stuff, they were protesters. Now they’re animals with no pride?

The NBA apologist is getting dunked on all over Twitter, which he deserves.

Make no mistake about it those who were looting were not protestors. They were criminals who just blended in. Hell bent on stealing and property destruction. When the legit protestors left midday everything went off the rails.

They are criminals. So were the people Palmer egged on just two days prior.

A Police-Related Killing You’ve Heard Nothing About