The Death Rattles of the Himalayan Yeti 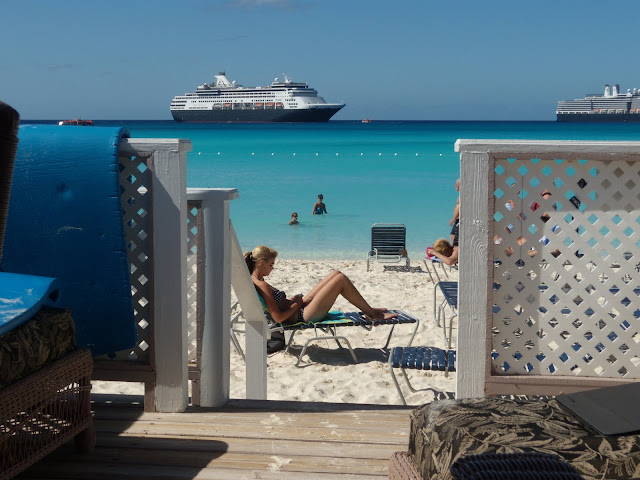 We interrupt our usual blogging for a look back at how we spent our Thanksgiving vacation. There are a bunch of photos here of Your Humble Narrator meeting some of his Imaginary Internet Friends in person on the following page. They’re somewhat big files, so I’m putting in a page break to keep them off the homepage to minimize bandwidth if you’re not on a peppy broadband connection.

Packing for a two week trip in two very disparate climates is quite a challenge. Fortunately, my wife approaches these things in much the same detail that Eisenhower planned continental invasions and Von Braun approached lunar landings. Multiple Excel spreadsheets and pre-flight checklists are involved. (You think I’m kidding.)

And they’re needed, too, since we were about to head off to first a week on the National Review Caribbean Cruise, and then a week in South Jersey to visit my mom – and then a weekend excursion to New York before finally returning to California.

We flew out of San Jose Airport, where some bright spark has gotten the idea of placing a player piano in the parent/child waiting area just before the TSA line. Picture in your mind music by Hieronymus Bosch, and you begin to understand the harmonic possibilities of nervous, fidgety five year olds banging on a player piano. It’s just what you need to hear while you’re worried about the TSA-induced small horrors to follow. You can feel the contempt of the TSA agents as you make your way through the line. They hate us – they really hate us!

Nina has written her cruise notes, and James Lileks has plenty of notes on the NR Cruise, so I won’t rehash the trip at sea, except to provide some photos, which start on the next page. 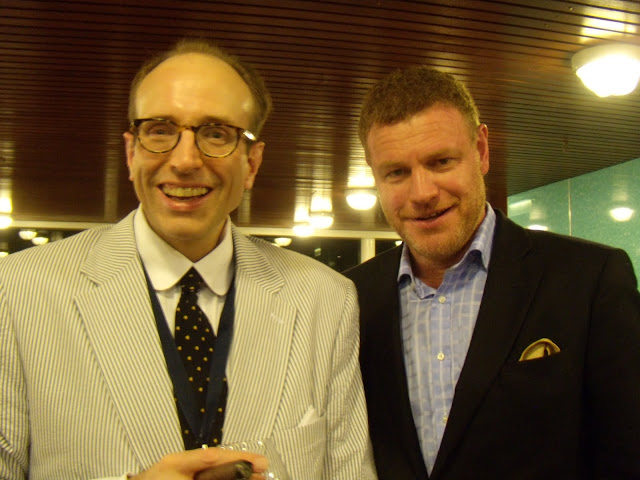 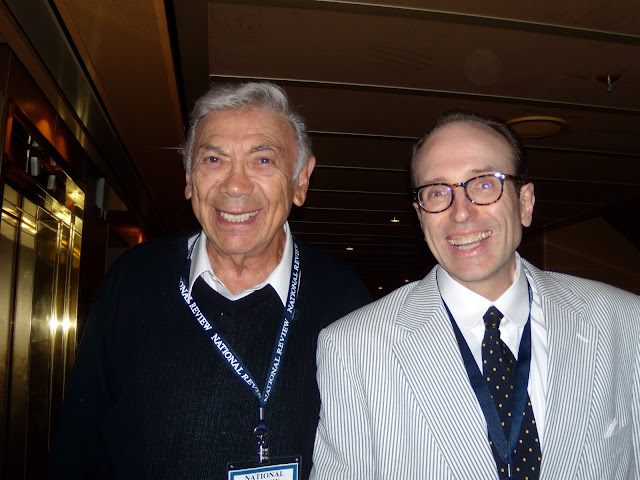 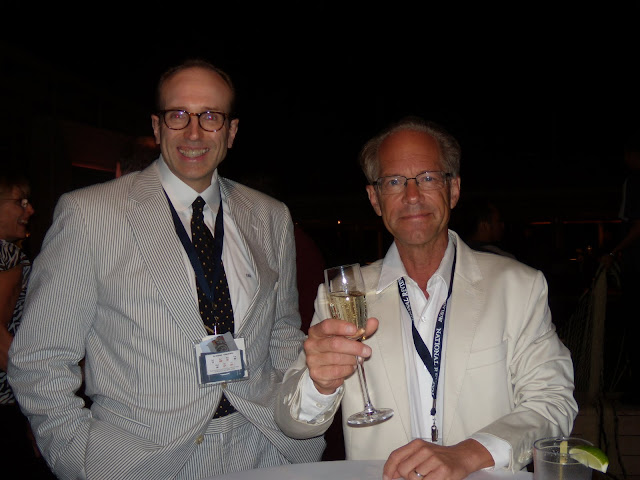 The Bard of Jasperwood – or “that nice Mr. Lilac,” as my mom calls him, from hearing James on PJM’s XM radio show. 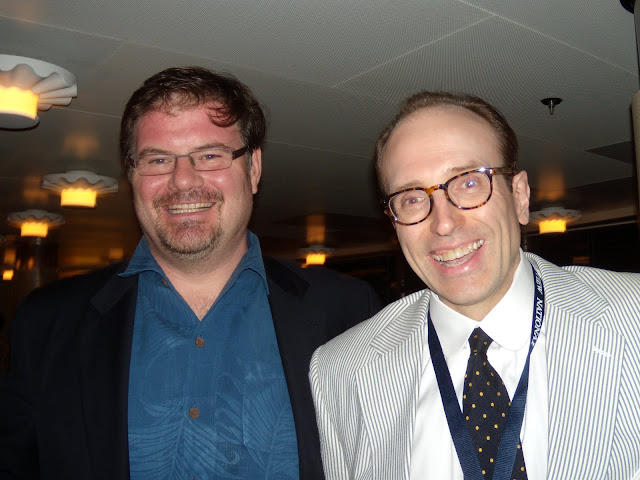 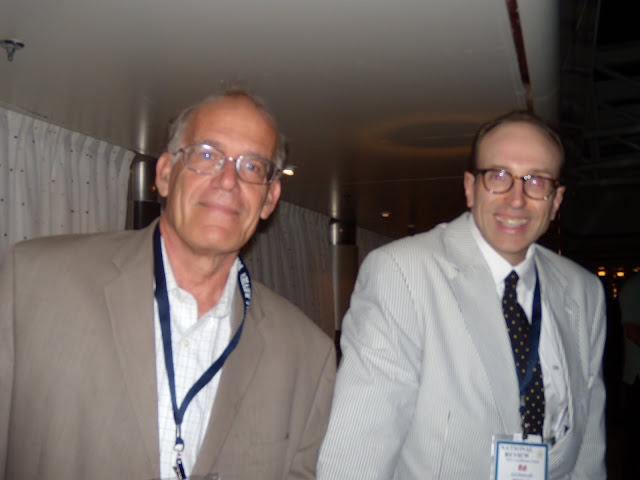 Victor Davis Hanson. (This photo isn’t blurry — everybody looked like this by the end of the day.) 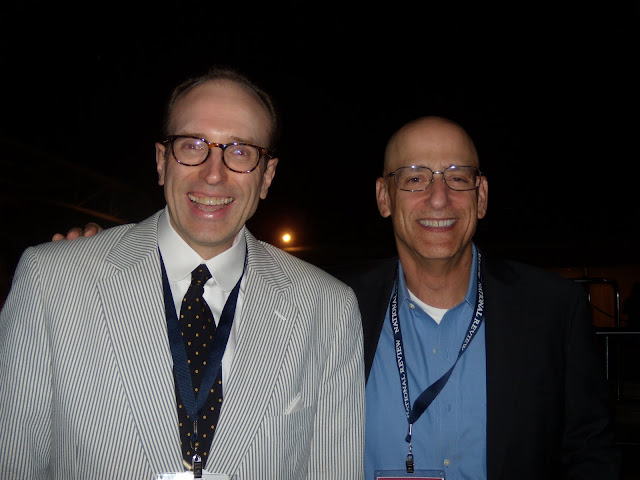 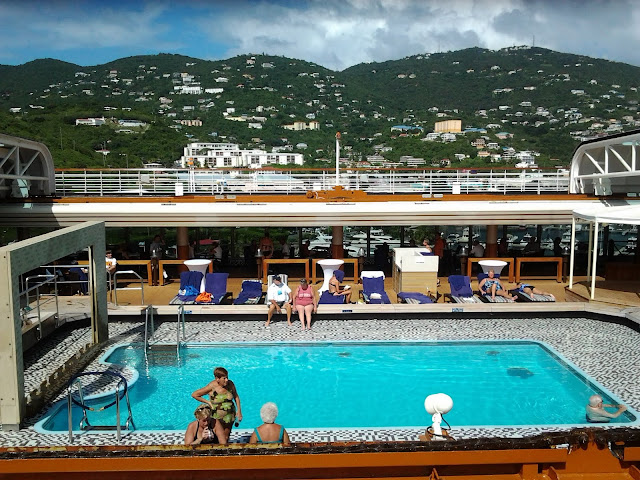 A look down into the Lido deck of the M/S Eurodam with San Juan, Puerto Rico in the background. When occasional rain struck, the dome above the pool could be retracted.  The rubber wheels rolling, retracting the canopy on the pool sounds like something akin to the death rattle of a Himalayan yeti in his final moments. Still though, it beats getting rained on while you’re in the pool.

The view from our Cabana on Half Moon Key, a private island owned by Holland-America: 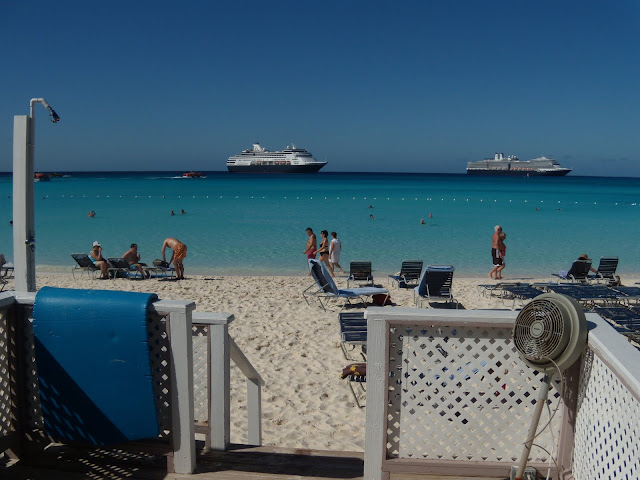 This being the National Review Cruise, that’s our ship on the far right, appropriately enough.

On the Holland-America ships, they helpfully provide a reminder of what day it is in the elevator. This is the calendrical apogee; these reminders begin to get a bit depressing when it ticks down to Thursday…Friday… 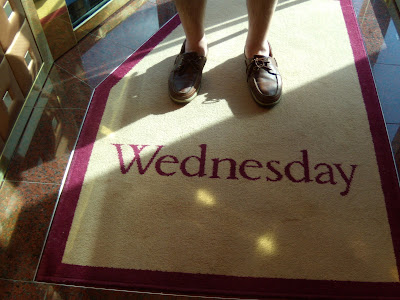 …And then Saturday, when we they kicked us off the ship for some unfortunate reason. But since we had some accumulated Marriott points, and needed to fly to New Jersey the next day, we decamped from the ship to the swank JW Marriott Hotel in Miami. A couple of floors of the hotel are devoted to what Marriott calls their Beaux-Arts Hotel. The name seems somewhat ironic since the lounge contains Mies van der Rohe’s Brno chairs, and each room has one of his Barcelona chairs. Weimar Germany’s Bauhaus of the 1920s (which Mies was the last director of, when the Nazis shuttered its doors) were mortal enemies of the earlier fin-de-siècle Beaux-Arts movement, in their quest to “Start from Zero.”

Picture Ken Adams designing Blofeld’s inner sanctum and you get a sense of the room’s style. And Q would have appreciated the amount of electronics in the room.  It seemed to have more consumer electronics than a Best Buy, from a good-sized LG flat-screen TV to Bang & Olufsen phones to an iPad programmed to allow the guest to place orders to room service — and a TV set built into the mirror in the bathroom. I’ve written for PC World and Audio/Video Interiors, and love gadgets and electronics, even I thought it was a bit silly.

But it was just for overnight, and we were soon jetting off to more Spartan quarters – a Courtyard by Marriott directly adjacent to an exit of the New Jersey Turnpike while we visited my mom for Thanksgiving week.

At age 87, mom is definitely slowing down. And she’s reaching a point where the small quotidian details of life are becoming quite challenging. Before we left for the NR Cruise, we had shipped a suitcase full of our winter clothes to her house and picked it up on the way to the hotel from the Philly Airport, whose late-’60s Corbusier-styled concrete brutalism remains as charming and hospitable as ever. FedEx dropping off a suitcase blew my mom’s mind, as the kids said back in the Nixon era. But we discovered the next day that she had much on her mind recently.

She had fallen the week before we arrived, and fortunately, only the inch-thick wall-to-wall carpeting cushioned her blow. But she had been distracted by the devious trick her evil banker had played on her. One of her CDs had come due. And rather than roll it over, the bank manager had suggested an investment whose labyrinthian complexity had completely befuddled her. She asked me to take a look at the paperwork, for fear that she had been swindled (while simultaneously telling me how friendly the manager is, and how much mom likes her).

I had feared the worst. Where had my mom’s money ended up? Locked into a variable-rate annuity invested in Nicaraguan junk bonds? A speculative oil and gas partnership? Solyndra stocks? An aggressive growth small-cap fund with an enormous front-end load for which the manager was feasting on a gigantic commission?

No! This nefarious bankster had put my mom into….a money market account.

It was actually the perfect choice, but at this stage in her life, my mom only knows two letters when it comes to banking: C and D.

So an hour into our first day of visiting my mom, Nina and I drove to the local branch, and explained to the friendly and exceedingly competent manager that she had done exactly the right thing – but could we reverse it and put my mom back into an investment that was guaranteed to get clobbered by inflation?

We could – but obviously, we’d need my mom present to sign the paperwork. And getting mom into the car, at her age, and after a fall was more than a little challenging. But eventually, this complex investment strategy, the likes of which would have made Gordon Gekko green with envy was finally concluded.

So to occupy mom’s mind the next day was the fear that she had somehow been disinvited to my cousin’s Thanksgiving party – despite the fact that’s she’s been cheerfully attending as a welcome guest, for the past decade, particularly after dad passed away.

That fear resolved, the next day was the fear that the flowers she sent them for the party wouldn’t arrive on time. Fortunately, they were sitting right on the mantelpiece when we arrived the following day.

Thanksgiving with my cousin, her husband, their son and daughter in law, my Aunt Mary and my mom is the perfect way to spend the holiday. They put on a spread that could feed Patton’s Army, and it’s all extremely tasty. The day’s NFL games are on in the living room, and it’s all wonderfully warm and friendly. My Aunt Mary, who lives with my cousin and cousin-in-law is 91 and looks twenty years younger. Recently retired as a daycare assistant in the NJ school system, she’s now going to the local gym – and pumping 20 or 30 pounds of iron. Her coach there loves her, not surprisingly.

The day after Thanksgiving, Nina and I drove up to New York to further dispense more Marriott points and stimulate Mayor Bloomberg’s struggling economy. We spent the night in the Algonquin Hotel – which, when not having their own issues with Nanny Bloomberg – is an exercise in coziness, to put it mildly. Though the room was at least marginally larger than the shoebox-sized W Hotel where we stayed during the PJM launch in November of 2005.

Carefully studying which Martini to order in the lobby of Algonquin while disguised as Larry Kudlow’s stunt double:

Not surprisingly, each guest’s door had a quote from a member of the Roundtable:

“A liberal is a man who leaves the room when the fight starts.”  Who knew Dorothy Parker was on the NR Cruise?

“Anyone can do any amount of work provided it isn’t the work he is supposed to be doing at the moment.” Robert Benchley explains exactly how blogging works 75 years before it was invented.

And just to remind you of the shoebox sized room and lack of sound-deadening insulation, a pair of earplugs are helpfully provided in the nightstand, right next to the Bible:

“In the city that never sleeps, Matilda thinks these may help you! Ear plugs from the Algonquin Hotel.”  No wonder Matilda never heard Nanny Bloomberg’s anti-feline shocktroops approaching.

While in New York, we walked uptown to the Seagram Building, where we had dinner at the Four Seasons, a restaurant I’ve dined in since my parents took me there for a few of my birthdays when I was still in single digits. (My parents met Nina’s mother the night before our wedding in ’98, and I had dinner there in June of 2002 with Nina and a friend before departing to interview Les Paul during the early heady days of the Blogosphere.) Having been Barcelona Chair-less for the past week, it was a welcome sight – and the Pool Room was absolutely jumping, with even the private seating area above the room opened up for the overflow. I had more than a little schadenfreude over the “Hope” artwork by Robert Indiana displayed in the private area. I wonder how hard-wired the nostalgia in the minds of New Yorkers for that brief shining moment in November of 2008 when the next FDR/JFK/Lincoln/Gandhi/Jesus  was about to lead the Glorious New Era?

The Four Seasons sometimes has its off-nights, but they were in rare form on Friday. The waiter had told us that they day before, they were cranking out endless turkey dinners, but tonight, we were dining on smoked salmon, duck consommé (with foie gras dumplings)  and Long Island Duck, all of which was exquisite. For a night at least, it was nice to be one with the One Percent.

The next night, we dined with old friends who live in the city, we regaled them with stories of my mom’s financial machinations, and they returned the favor by telling us horror stories of their run-ins with Occupy Wall Street. (We weren’t all that far from Zuccotti Park – though fortunately, no patchouli oil – or even more pungent aromas – could be detected in the air.)

On Sunday, we spent a last day with my mom before flying back the following day. Regular blogging will resume as soon as the jetlag wears off. And as soon as I can figure out how those newfangled money market accounts work.