Dirty Jobs: The Neglected Foundation for a Healthy Economy (Oh, and They Pay Great, Too)

Why all the hate for dirty jobs? Politicians, who express love for blue-collar workers, often seem to hate every job they do.

Every policy they have works to eliminate those jobs. Sometimes it is cloaked in lofty language about “retraining for the jobs of the future.”

Environmentalists really seem to hate dirty jobs. For them jobs that dig, drill, cut or build are not only demeaning to the worker, they are contributing to an impending global apocalypse. Eliminating them is a “win-win.” They pretend that diverting investment to “green jobs” is the creation of “new jobs,” when all it does is shift more resources to far fewer resulting. Green energy jobs are great jobs but look at where most of those green energy devices are manufactured and you will not find a US worker involved in anything other than (maybe) the installation.

Some Republicans decry such regulations and poor investments, but only recently are a few lonely voices starting to push for skilled trades education and freedom. Why? Mostly because the old guard likes to feel cool talking about “emerging sectors” and “the knowledge economy,” and because deep down they think the trades are still geared toward unionization. What they seem to miss is that if the knowledge economy designs a widget it isn’t built without a group of skilled tradespeople to do so.

This situation is stupid thinking disguised as forward thinking. Scratch a skilled tradesman and you find a wannabe business owner. Every mechanic wants to own his own shop, every carpenter thinks about being a contractor. Some just want to control their lives and work when and where they want, for whom and as often as they want.

The education establishment is almost completely geared toward the “knowledge economy,” toward everyone “working with their brains” in cubicles– no matter what their real talents may be. For many teachers, a student going into a skilled trade is a mark of failure on their part. It’s something that was “settled” for by a student because they “couldn’t get into college.”

But like Mr. Incredible in the great Pixar cartoon many people cannot stand the thought of shuffling papers for the rest of their lives and find great fulfillment in working with their hands–and directing others who work with their hands.

And here’s a dirty secret… It pays a LOT better.

And here’s another dirty secret… We need those jobs. It’s manufacturing that creates real wealth, and it’s yet other tradesmen who keep those products working. We can’t just float around on brainpower. People need stuff. Somebody has to make it, and somebody has to fix it. That’s civilization. That’s the real economy.

Next: From Think Tank President to Motorcycle Repairman

Consider the case of Matthew B. Crawford Ph.D. His first job, working for a think tank, he relates in the great memoir, Shopcraft as Soulcraft: An Inquiry into the Value of Work made him miserable. After all the work and tuition to get where he was, he had a sudden revelation summing up all that is misguided about how educrats and politicians prepare kids for the “world of tomorrow”:

“How was it that I, once a proudly self-employed electrician, had ended up among these walking wounded, a ‘knowledge worker’ at a salary of $23,000?”

Crawford worked his way up the ladder, but still was not happy. Finally, he chucked it all and opened his own motorcycle repair shop. He’s making good money and, more importantly, he doesn’t dread going into work every day. But he realizes that his teachers would have been more proud of him in his former job. He reports that one study showed that 90% of guidance counselors pushed students toward college, and observes:

“It is a rare person who is naturally inclined to sit for sixteen years in school, and then indefinitely at work, yet with the dismantling of high school shop programs, this has become the one-size-fits-all norm, even as we go on about `diversity.’

“Of course there is nothing new about American futurism. What is new is the wedding of futurism to what might be called ‘virtualism’: a vision of the future in which we somehow take leave of material reality and glide about in a pure information economy. … (F)or fifty years we have been assured that we are heading toward a `postindustrial society.’ While manufacturing jobs have left our shores to a disturbing degree, the manual trades have not. If you need a deck built or your car fixed, the Chinese are no help. Because they are in China.” 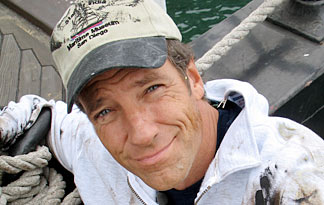 Mike Rowe, formerly of the show Dirty Jobs, has a new website and project called Profoundly Disconnected. He summed up something that had been a nugget of a discussion amongst us for some time.

He starts explaining the problem by showing a poster than hung in guidance councilors offices throughout the 1970s and into the 80s. It had one of the most used sound bites of all time.

This was used to convince people to do what this poster says when choosing a career field.

They were half right. Mr. Rowe is 100% correct when he revised the poster to say:

Tim Imholt, one of the co-authors of this column, has worked as a scientist and currently works as an engineer. In many projects, after the design is done, some very delicate things need to be built. Assembling them is mostly done by engineers but actually building the pieces falls to tradesmen. The number of companies offering such building of one-of-a- kind parts is quickly on the decline. This hurts “the knowledge economy” and “emerging sectors.”

Recently when the author was visiting one of these very high tech companies a real life shortage of a particular trade was discussed. The company that does the building said that when they hire people they are actually paying them a full salary for a year (with benefits) just to learn how to do some of these machining jobs, or welding jobs, or other prototyping sorts of things. It is a skill that is rapidly disappearing.

In a few years there will be an even greater shortfall. What will happen when scientists with the next Nobel Prize-winning experimental design, or engineers with the next paradigm-shifting product can’t get the prototype built because there is no one left to do it?

That is a day when America loses–not just the scientist or engineer. More little boys dream of operating one of these, than of sitting in a cubicle

Currently, blue collar workers are without a political home. They had been drifting to Republicans, partly because they make enough to be bothered by high taxes, partly on social and cultural issues. But in the last few elections they voted for Barack Obama in greater numbers than the last few Republican nominees, even though the President personifies the Democratic Party they had been drifting away from.

The Romney campaign made use of Mike Rowe, but largely restricted their message to energy and mining issues in Ohio and Pennsylvania, and all but missing the larger point. With the campaign taking jabs at Obama and his so-called energy policy it revealed they also have the aforementioned prejudice by emphasizing that Obama was sacrificing “good-paying union jobs.”

Why? Because a Republican President was at the helm during the crash that put many of them out of work, and at least the Democratic President is offering them increasing kinds of assistance. Skilled trades workers want to work; but they also don’t want to starve. These assistance programs must exist to help people in need, but we also need to create a plan to get to an economy with employment so low they are rarely needed.

Without these skills being restored in our schools, and these jobs being embraced, rather than shunned by the political class, America has little chance of returning to full employment, and will become ever more susceptible to economic bubbles and crashes.