Progressives Have Gotten a Lot of What They Want in 2021—So Why Are They Still So Miserable?

Progressives should be pretty content right now. The Biden administration is using all their preferred talking points and enshrining them into the administrative state. Whether it is systemic racism, equity, the climate crisis, or “justice” related to any of the priorities of progressives, the phrases fall from the mouth of Joe Biden in almost every speech that he diligently reads off the teleprompter. Equity, trans rights, and climate mandates have been enshrined in every executive order someone wrote for him to sign.

The military took a 60-day standdown to root out “white supremacy,” and the Biden DOE will indoctrinate our children with critical race theory and the rewritten history of America in the 1619 Project. The Senate has confirmed Biden’s most radical nominees to lead federal agencies and wrongthink is being punished as the “insurrectionists” of January 6th are held in solitary confinement. Anarchists rule the streets of Portland and Minneapolis without interference from law enforcement. A jury convicted former officer Derek Chauvin on all three counts for the death of George Floyd. Progressives should be thrilled. Their revolution is proceeding apace.

However, they are still miserable. From the commentary in the corporate media to progressive darling Representative Alexandria Ocasio-Cortez (D-N.Y.) to activists on the street, it is never enough. Utopia is just out of reach, and more must always be done. This narrative of perpetual crisis has consequences that could turn into an actual tragedy, but few people are talking about it. What follows is a severe problem that needs a solution, not an opportunity to mock people.

A survey from Pew Research in March of 2020 demonstrated some startling statistics about Americans’ mental health. This data was taken before months of lockdowns and pandemic panic porn—about the same time we were assured we only needed 15 days to slow the spread. Zach Goldberg, a Ph.D. candidate and fellow at the Center for the Study of Partisanship and Ideology, took the data from that survey and created graphs that illustrate the real challenge. “Liberal” and “very liberal” respondents can serve as a proxy for being counted among the ranks of progressives.

Three trends are particularly notable in the current environment. First, those who identify as “liberal” or “very liberal” report having had a medical provider tell them they had a mental health condition at significantly higher rates: 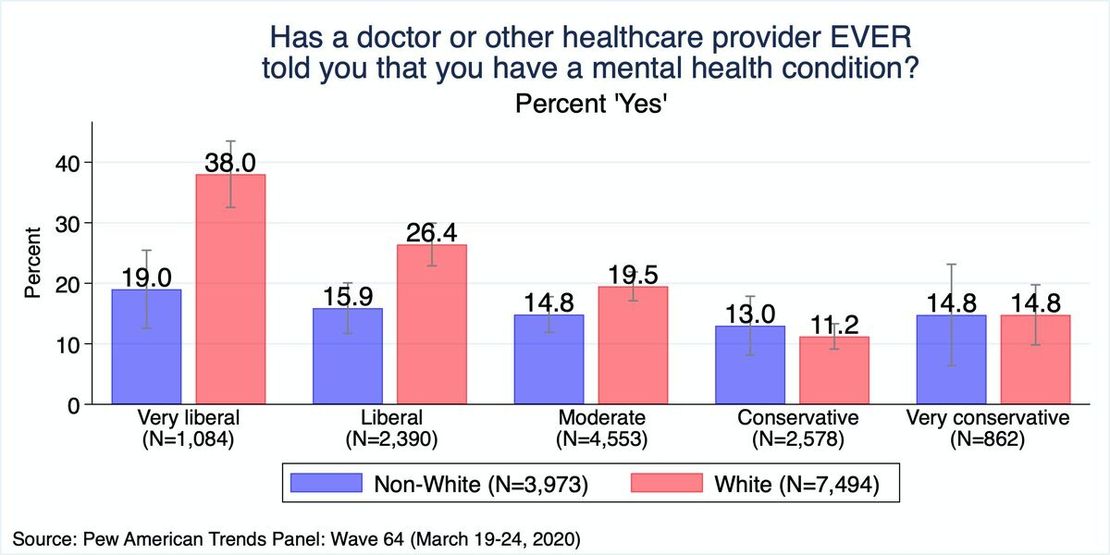 Next, white Americans in the “liberal” and “very liberal” group report receiving mental health diagnoses at higher rates. This difference grows when other factors are controlled for:

Finally, these rates are particularly notable in the 18-29 age group, with white liberal women in that age group reporting being diagnosed with mental health disorders at a rate of 56.3%.

This data is supported by what psychologist Jean Twenge found using large data sets in her book, iGen: Why Today’s Super-Connected Kids Are Growing Up Less Rebellious, More Tolerant, Less Happy – and Completely Unprepared for Adulthood. Twenge asserted that Gen Z, or those born after about 1995, were at the forefront of the worst mental health crisis in decades. She made that claim in 2017, before the pandemic and before placing racial essentialism at the center of everything.

No matter the political ideology in the Pew survey, the rates among young people, are higher. What do people in the 18-29 age group have in common? They came of age during the “Great Awokening,” which accelerated after the 2016 election. Liberal women tend to align with the ideas of third-wave feminism. The culture is also placing increased blame on white Americans for the problems of others as the goal of a colorblind society is being upended with anti-racist theory.

One article summarizes the pressure woke ideology imposes this way:

Progressivism is an ideology that supposedly demands equality for all, and one that keeps score to an exhausting degree. The privilege between social classes, between races, between men and women, between religious and non-religious, and more, all have to be constantly monitored, and “inequality” has to be exposed for the purposes of “accountability.” That kind of behavior isn’t just unrealistic, it’s unsustainable. In all honesty, it’s understandable that anxiety and depression thrive in these kinds of environments when we’re focusing on every minute, problematic issue in our world and not able to take comprehensive, productive action to solve all these problems.

There’s also the unrelenting focus on oppression, verbal violence, and micro-aggressions. We know that building resiliency against hardship is the best weapon against depression and anxiety, yet progressive ideology forces its followers to wallow in feelings of helplessness and victimhood. Instead of empowering women and minorities with self-knowledge, strength of character, and resilience to hardship, progressivism encourages victims to stay in a place of fear and helplessness.

That is an excellent explanation for why progressives may suffer more mental health issues. There is a never-ending list of problems to solve on the march to some version of utopia, which is entirely at odds with human nature. A connected world makes it feel like the issues of racial tension, inequality, and a so-called “climate emergency” are bearing down on us with frequency and at a terrifying speed. The corporate media, progressive leaders, universities, celebrities, and now even corporations amplify these messages. Critical race theory, which divides society into the “oppressed’ and “oppressors” based solely on appearance, is everywhere from K-12 education to Coca-Cola.

Those with a different message, like Dr. Jordan Peterson, who preaches personal responsibility and the importance of the individual, are turned into cartoon villains. The University of Tennessee was pressured into yanking a cheerleading scholarship from a young woman for making a Snapchat video that used a rap lyric that included a slur three years before. The New York Times celebrated this racial justice victory after cheering the same type of cyberbullying on another occasion. The cancel culture sold by progressives eventually comes for everyone and young people instinctively know this.

Some employees and parents are fighting back to stop the degradation of our workplaces and communities into warring tribes based on race and the progressive push for equity. Climate activist Michael Shellenberger wrote Apocalypse Never: Why Environmental Alarmism Hurts Us All after seeing how the climate change narrative negatively impacted his young daughter’s friends. Now he is denounced by the climate change movement he once led.  We must all figure out how to pick up our courage to speak and act in our own local communities and spheres of influence to combat the crisis narrative pushed by progressives. If we don’t, the America we leave our children will not be the one we grew up in—if they are even capable of taking the reins at all.