Country Alternatives: 10 Reasons To Change Your Mind About Hating Twang 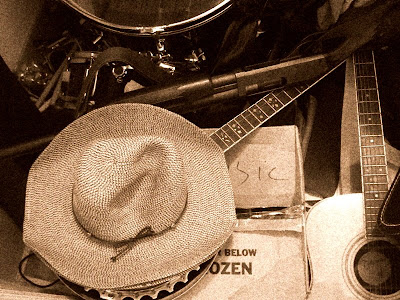 No need to fear -- there's more to country than what radio would have you believe.

It’s safe to say country music gets a bad rap. Sure, having grown up in the heartland, there’s the safe argument that this critic is more than a bit biased, but hear me out: there’s a lot more to country music than you’ll ever hear on your local Clear Channel station. And when it comes to contemporary music with its lyrical finger on the pulse of life in America as we see it in 2012, there’s little out there which can rival the honesty of a good country song. You just have to dig for something a little more “alternative” to the mainstream drivel. There’s not a Taylor Swift to be found on this list – rather, the emphasis is on variety, which is both the spice of life and the ultimate ingredient in the best music you’ve spent way too long being afraid to enjoy.

With lead vocals drawing heavily on early Neil Young, this alternative country super-group features members of Deer Tick, Dawes and Delta Spirit. The combination of three top-notch singer songwriters into one group makes for the ultimate headphone fix, and their self-titled debut out last year is one of those keepers you find yourself pulling out time and again when you need country-tinged rock with real soul and grit.

You can’t go wrong with either of their initial bands either, but throw these three together and the result is hard to ignore.
#9 – Fred Eaglesmith

Fred Eaglesmith is a Canadian alt-country performer who has built his career writing brutally honest songs about real people — down and out characters dealing with the aspects of life rarely heard in pop songs. He’s a master of the character sketch, and his songs read lyrically like textured short stories. At the heart of a personal favorite, “Water in the Fuel,” he breaks things down with a sketch of rare beauty describing the heart of his character’s loss:

Remember that winter when the lake froze over? We drove out there after we’d unloaded … we revved that truck and we spun it round and round. Then we left it idling out on that ice as we crawled in the camper and I held you tight. Baby, I’m sure on thin ice now.

Not to mention he builds the song — which speaks of a relationship dying a slow, painful death — on the most incredible truck-driving metaphor you’ll hear anywhere. The song and its writer are keepers and it’s amazing he’s not spoken of more widely as a lyricist. A few listens and I’m sure you’ll agree.
#8 – Craig Finn

Craig Finn may be better known as the lead singer of the Hold Steady, but his work as an alt-country solo songwriter showcases his skill as a born storyteller and proves that country-based songwriting doesn’t have to let up on the rock and roll steam too much. His new album Clear Heart Full Eyes is one of the most interesting albums you’ll hear during this bleak winter season, building on his already strong lyrical reputation to create music that’s got more twang than his work with his full-on rock band. It’ll take a few more albums before we have a full sense of what Finn can do as a songwriter in this vein, but he’s off to a damned fine start.
#7 – Dustin Kensrue

Dustin Kensrue was one of the best surprises of 2007 when he came out with his solo album Please Come Home, which was one of the best alt-country albums of the year despite the fact that it came from a writer better known for his post-hardcore band Thrice. But it only took a listen through to be assured that his ability as a straightforward alt-country troubadour deserved all the notice it received. Unfortunately he hasn’t invested more time pursuing this sound since that album, but the nine tracks it provided were enough to provoke repeated listens well beyond its release. And though the music has a real alt-folk country aesthetic, Kensrue’s vocals are smooth and not at all the cliché people have come to expect after years of pop-country radio consumption.
#6 – Chris Knight

Chris Knight is one of the better Kentucky songwriters you likely have never heard. He writes songs which are raw and stripped bone-deep like his songwriting heroes wrote when true country music was a niche market you wouldn’t ever expect to sell millions of copies. These are the stories of broken promises, broken homes and broken lives, told by a man whose voice is ear-catching and addictive as all hell. Growing up in the mining community of Slaughters, Kentucky, Knight took the bare perfection of Steve Earle’s Guitar Town and built on it to create a sound strictly his own. And though he had his brush with contemporary country fame when Decca put out his self-titled debut in 1998, he’s chosen to build his true reputation with years of hard roadwork, letting his music speak better through raw honesty rather than taking the pop-country road more frequently traveled.#5 – Raul Malo

Raul Malo is the most famous songwriter on this list, but not under his own name. He was the voice behind the Mavericks, one of the biggest pop-country bands of the nineties, but he’s made more of a name for himself as a soloist since that band disbanded in 2000. His voice is one of the finest in country music, a rare tenor steeped in the sounds of latin jazz and salsa, with enough country to keep your boots tapping in time. Born in Miami, his middle-class Cuban American upbringing kept those latin sounds at the forefront of his music, giving his songs a unique place in the world of contemporay country. Like Lyle Lovett, he’s blazed his own trail, and he’s a performer you’re sure to love even if you swear up and down you hate anything country.
#4 – Lucero

Lucero blends alternative country with punk rock roots, leading to comparisons with the Replacements. Ben Nichols and his band have put more than a decade’s work into pushing their blend of Southern Rock, punk and country to a generation of fans accustomed to the genre-shifting sounds this entailed. They didn’t get a major label push until their seventh album, 1372 Overton Park, came out in 2009. But their music was road tested by hundreds of live shows per year, and they’ve staked a claim on being among the top purveyors of hybrid alt-country. The video above is for a song they recorded in 2002, seven years before they ever got anywhere close to the mainstream, and it’s still among the perfect examples of what makes these Memphis boys among the most interesting artists under the radar.
#3 – Amanda Shires

Dubbing her 2011 album Carrying Lightning, Amanda Shires distilled into two words why she’s among the best up-and-coming songwriters in the alt-country realm. These are songs which crackle with raw electricity, as she writes the stories of real people living true American lives. The album stands among the best in the genre to come out during the last calendar year, and there’s little traditional twang to her voice. Rather, she brings a contemporary alternative voice to songs which are steeped in the rural tradition, and she builds these songs on so many layers you’ll be repeating them constantly to dig at the best parts. She hasn’t cracked the mainstream yet, but with the success of Miranda Lambert’s side band Pistol Annies, there’s clearly a mainstream audience for this kind of honest, introspective female-fronted country.
#2 – Will Hoge

Will Hoge hails from Nashville, but he’s as far from the Nash Vegas cliché as you’re going to get. He’s been touring his blend of alt-country and classic rock for more than a decade, but the heart of his music is in his character-built songwriting and his incredible grasp of pop hooks. His career almost ended with a motorcycle crash in 2008, but Hoge relearned to play his guitar and came back with The Wreckage and Number Seven, the strongest albums of his career and the most likely to bring mainstream’s listeners rather than forcing him to sell out his sound. The perfect example of this potential is his song “Even If It Breaks Your Heart,” which didn’t find mainstream success in its initial incarnation, but is now burning up the country charts as recorded by the Eli Young Band. The song loses nothing in the translation from alt-country to pop-country, proving that good songs do rise to the top even if takes time.
#1 – Jason Isbell

Jason Isbell took the long route to becoming the most interesting alt-country songwriter working the scene today. He joined the popular Southern Rock band Drive-By Truckers in 2001, taking part in several of their strongest albums, before deciding to abruptly leave to record solo and then form his own band the 400 Unit. One could have been forgiven for assuming he’d have a hard time matching the wide appeal of his former band’s hard-rocking alt-country, but fact is, he hasn’t tried to match it. He’s gone his own way, proving to be a songwriter of the highest order on three consecutive outside-the-park homeruns. His 2011 masterpiece Here We Rest continues his upward trend, showcasing the softer side he couldn’t really find a place for with the Drive-By Truckers. These songs are loose and rugged, bittersweet and resillient, and there’s so much variety even the hardest-nosed haters of the genre are likely to be won over. In short, if you give his albums a listen and you don’t find something to like, I’ll have to tip my hat to you before returning with beer in hand to listen to more, because this is as good as it gets.