You can’t have a “best of” list without looking at the other side. Following up on 8 Best Movie Series Reboots, here are six of the worst reimaginings in the world of cinema.

X-Men’s Bryan Singer seemed like the perfect choice to resurrect Superman, but this film was bland and boring with messianic pretensions.

5. Jack Ryan: The Sum of All Fears

Where to start with this terrible movie? The cast? Ben Affleck is more whiny than heroic as he tries to stop a nuclear explosion in the U.S. But the real problem is creative cowardice. Tom Clancy’s novel about Islamist nuclear terrorism was more relevant than ever after 9/11, but the movie’s producers decided that changing the bad guys to neo-Nazis from “stock character land” was the way to go. Just awful.

Some of you are going to yell at me (and scream George Lazenby), but for my money, Roger Moore’s reign of Bond traded rugged good looks for mannequin features, wit for campiness, and thus robbed the series of its style. Plus, Sean Connery is actually an actor. Moore always seemed to be mugging for the camera. This first feature was one of the more solid entrees in the Moore pantheon, though it had one of the worst songs.

I may be in the minority for loving both of Tim Burton’s Batman movies with Michael Keaton, but everyone agrees that the series went waaaaay downhill after them. Fans blame Val Kilmer and George Clooney, but they shouldn’t — director Joel Schumacher, a talentless studio hack who learned all the wrong lessons from watching Burton, is to blame.

All of a sudden, the laws of physics don’t apply to Batman… don’t get me started. This was just pseudo-style over substance, and thankfully, almost forgotten after the mastery of director Christopher Nolan.

Rarely in the history of movies has the creator of a monstrously successful series of films so misunderstood their appeal and set out to destroy it. Not only did George Lucas bring us this dour, boring movie, he did it twice more — then griped about how J. J. Abrams has undone the damage he did to our memories. Wasn’t what he did to Indiana Jones enough? Luckily, one can recreate the best part of this movie — the pod race — by playing a video game instead of suffering through the meandering movie. 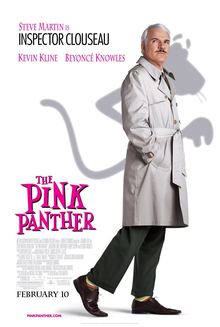 Peter Sellers’ first five films as Inspector Clouseau are masterpieces of slapstick and comic timing. The Inspector is as vivid a comic character as any in the history of film, but these films only make sense with a setting of France in the swinging ’60s and ’70s.

Attempts to undo Steve Martin’s descent into boring irrelevance were not helped by this miscast, bland, unnecessary and, worst of all, unfunny reboot. I cannot believe they gave this movie a sequel.

For media inquiries, please contact [email protected] The author is the owner and president of Winning Strategies, a full service political consulting firm in Michigan.  An award-winning book and movie critic for 20 years, he has been a regular columnist for national conservative publications since 2006. He is also the author of the critically acclaimed book, The Forest of Assassins, a novel based on the still classified true story of SEAL operations and the start of the Vietnam War.  His latest novel is China Bones, a romantic war story about a Marine in Shanghai from the Sino-Japanese war, through WWII and the fall of China to the Communists. Follow him on Twitter @davidforsmark
Read more by David Forsmark
Tags: MOVIES
SHOW COMMENTS