An Intriguing New Find Begs the Question: Will the Oak Island 'Money Pit' Mystery Ever Be Solved?

When I was a kid, I was at one of my grandmother’s houses and got bored. I started leafing through a worn copy of Reader’s Digest one day and found a long piece about an island off the eastern coast of Canada. It was a weird article about a “money pit” on that island that people had been trying to figure out for about 200 years. The title was “Oak Island’s Mysterious ‘Money Pit.'” It hooked me right in. What kid doesn’t love a good mystery that might include pirates and make Shakespeare a little bit more interesting? I took that copy home with me with my grandmother’s permission and read it once in a while for the next several years. That article was the only available resource about the mystery. There was no internet and as far as I knew, no books had been written about it yet.

I guess I was already into history and just didn’t know it. The article fascinated me, at least for a while, until Star Wars or Indiana Jones, or something else came along. It may have been girls or soccer. Anyway, the Oak Island mystery was always one of those things that kind of intrigued me but I couldn’t do much about, growing up a zillion miles away from the place. I’d read the article and then put it away until I eventually lost that copy of it.

Decades roll by and the History Channel comes out with The Curse of Oak Island. The title put me off right away. It’s a treasure hunt, not a curse. I don’t even believe in curses (though if anyplace I’ve ever been is actually cursed it’s the Alamo. The things I’ve seen and heard about there…) but a show about that mystery money pit I’d read about as a kid was something I’d watch even it if was on the network that runs more alien speculation than actual history these days.

I mean, History Channel’s biggest star over the past several years is this guy. 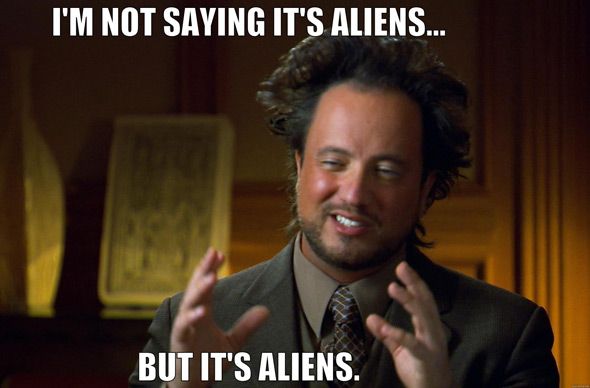 That doesn’t inspire confidence that the channel will handle Oak Island responsibly. The real story is crazy enough, including six dead men and one future president, a suspected underground treasure vault, and lots and lots of gold — or something that’s so valuable and possibly dangerous that someone went to extreme lengths to hide it. One of the theories involves the Ark of the Covenant being at the bottom of that flooded treasure shaft.

Honestly, I went into the first season fearing they’d work aliens or crystal skulls into the money pit somehow.

Eight seasons in, aliens and crystal skulls have yet to make an appearance on The Curse of Oak Island. What has happened is the Lagina brothers, older brother Rick and younger brother Marty, have taken a meticulous and scientific approach to the island’s weird history and strange artifacts. They’ve brought in geophysicists and archeologists, world class divers, a metal detection expert, engineers, and drilling specialists, to apply hard science to the mystery. They haven’t solved the mystery but they are uncovering the incontrovertible fact that something, likely something quite unusual, happened on the island a very long time ago before the money pit’s alleged discovery in 1795.

They’ve found quite a bit of evidence, including a wooden slip for ships, going back into the 17th and 16th centuries and earlier.

Leading theories suggestive of a treasure mystery are:

Honestly, there are too many theories, and the Laginas have chased just about every one of them. That’s one of the most patience-testing aspects of the show. It gets tedious when you just want them to dig already.

There’s an alternate theory out there that the money pit with all its watery drains and booby traps was actually a salt processing facility back in the days when salt was tough to come by if there were no salt mines in the region. That theory could explain some of the known or suspected facts about the original shaft, such as the peculiar French drain system that seems to extend toward it from the artificial beach on Smith’s Cove. In this theory, the drains weren’t a booby trap, they facilitated filtering salt out of salt water. The coconut fiber, found under the artificial beach by searchers going back more than 100 years, is not native to the island but could have been used in that salt filtration system.

Where did the coconut fiber come from? Several hundred miles south—certainly not Oak Island. That gives the pirate theory a boost. Someone put it there for some reason. The fiber dates to the 17th and 18th centuries, for what that’s worth. Many of the artifacts and structures buried on the island date to that rough timeframe — all well before the 1795 money pit discovery by four teenage boys who went on to search for the treasure for decades.

While the Lagina team hasn’t found the treasure, they have confirmed quite a bit of the weirder legendary pieces of speculation from the long search history, or found evidence that they could be true. The beach at Smith’s Cove is manmade, as treasure hunters have long suspected. Those alone are a major find suggestive of extensive activity by people with engineering prowess. There is a ship-shaped anomaly under the swamp, and pieces of wood and metal appearing to come from a ship have been found in the swamp. Some of those artifacts appear to have been burned. That backs a theory from the late Frank Nolan, who lived on and surveyed the island extensively. He believed a galleon-sized ship laden with treasure was brought to the island, its treasure hidden in the money pit or somewhere else on the island, and the ship burned to cover up evidence of the treasure. The swamp, in his theory, was created to cover up the remains of the burned ship. The swamp is man-made, as geophysicist Ian Spooner confirmed in a previous season of the show — much to his evident surprise. And, I have to admit, mine. The man-made swamp theory always struck me as nonsense until Spooner confirmed it.

Dr. Spooner closed out season 8 with one of the most intriguing finds yet. In all the years the Lagina brothers have been acquiring property on the island and applying millions of dollars toward hunting for the treasure, they’ve found more than 1,000 artifacts — but no treasure. Is there any, or was there ever any, treasure on Oak Island?

One theory suggests there was treasure, but Ball found some of it. That would explain how the freed slave who lived on an obscure island became one of Nova Scotia’s wealthiest landowners before he died. There’s little question now that Ball was a very intelligent businessman. He may have had connections with the British and French militaries as well. But whether he found any Oak Island treasure or not, some may still remain down in the depths.

Dr. Spooner conducted chemical tests of the underground water around the island during the eighth season’s hunt, and found high concentrations of silver in the water — so much so that he suggested there could be “dump truck” sized deposits of silver underground. The silver seems concentrated around a shaft called C1 that the team dug, and at the bottom of which they spotted what appeared to be gold metal reflecting in their camera views several seasons ago. Gold doesn’t dissolve in water, and won’t be detected by the tests Spooner conducted. But silver does, and would be. Spooner thinks he’s found a lot of silver on Oak Island. As far as treasure goes, silver tends to be associated with gold.

That’s an intriguing find, if it pans out. Oak Island has a way of teasing major discoveries before drowning them, though.

My personal favorite theory is the Templars did it, mostly because I find the Templars intriguing and suspect they were framed so Phillip could get their money and the pope could remove a potential challenge to his power. The engineering necessary to create the pit with the drain traps, if that’s what they are, with the man-made beach and swamp, suggest a very high degree of engineering knowledge for the time. The Templars had that. They also had a fleet and massive wealth. They may also have been motivated to hide a ship if it bore certain markings or characteristics that could be used to identify it as a Templar ship, outing them as men wanted by the church and the French crown. But having the Templars in the New World nearly two centuries before Columbus is a stretch. History never records the Templars setting foot in the Americas.

The most likely theory that includes treasure at this point seems to be military, probably French. The structures found under the artificial beach at Smith’s Cove suggest French design. Perhaps they hid some treasure there they’d seized from pirates, or perhaps they searched for a treasure there that pirates were rumored to have deposited. The French military was definitely on Oak Island before and after the 1795 mystery kicked off. It’s also possible a treasure was deposited at some point, and for completely unrelated reasons the French later fortified it against the British, France’s chief enemy at the time.

Hopefully season 9 bears down on the silver test and the brothers get some definitive answers. I’ve enjoyed the show and I like the brothers — Rick, the romantic, and Marty, the hard-nosed oilman who wants to get to the bottom of this whole thing yesterday. The journey is the thing, but it would be nice to see this journey reach a satisfying conclusion and Rick Lagina in particular live to see the tale told. He read that same article that I read when he was a kid, and it stuck with him so much he and his brother ended up buying the island and leading the largest search in its history. They deserve answers if anyone does.

I can’t shake that salt filter theory though. It’s very boring and realistic in a Maltese Falcon sort of way. That would also be the most Oak Island ending to the enduring Oak Island mystery.