If we are going to have a Department of Education, it is time for it to set some standards that ensure our social fabric is not completely shredded. The proliferation of critical race theory in our schools following the New York Times’ “1619 Project” needs to be stopped. If the DOE can’t return public education to an institution that builds knowledge and skills that will benefit a growing, technical economy, it’s worthless.

The simple fact is, we don’t have enough domestic students going into the required fields to quickly and efficiently decouple from China or remain a leader in innovation. For industries that require significant levels of technical talent, it just isn’t there.

Victor Davis Hanson, a senior fellow at the Hoover Institution, explains that America is facing a severe skills gap. We need to stop producing activists and start building skills. This process begins with K-12 education.

The collision between the pandemic and race riots has had an interesting effect. Parents are seeing what their children are being taught and they are shocked. So shocked they are sharing it publicly on social media. In some cases, when they try to intervene or ask questions, they are rebuffed. Some districts have sent home notices instructing parents not to watch distance learning classes.

If Your School District Pulls What One Tennessee District Did, Know Your Rights

Personally, such a notice would ensure that I would watch those classes. This pattern goes against the demonstrated benefits of parental involvement in a child’s education. It should also raise alarm bells for parents who aren’t examining what their children are being taught.

Author and Sky News commentator Shemeka Michelle shared what she overheard during her child’s online Civics and Economics class:

Here are a couple of the questions from the quiz my daughter has to complete to determine what her political affiliation should be. 🤔 pic.twitter.com/BxOewcXN7A

No political bias there. A Twitter user responded to Michelle’s post with a video of a civics teacher who needs a civics lesson.

This is my sons Civics teacher explaining how the electoral vote system works! This was after he came and told me the first half of the lesson was about BLM. pic.twitter.com/rmsrzLQ5OQ

Radio host Shannon Joy posted pieces of a curriculum aimed at 7th and 8th graders called the Our Whole Lives Sexuality Education. Because it is explicit, PJ Media will not embed it, but you may view it on her Twitter timeline.

Author and independent journalist Jack Murphy shared a program going into his children’s schools in Montgomery County, Maryland. He was more than a little incensed when he viewed the curriculum. He shared the information he was able to view from the Courageous Conversation program his children would be taking. Check out the entire thread here. Here are some selected tweets that highlight the critical race theory concepts (language): 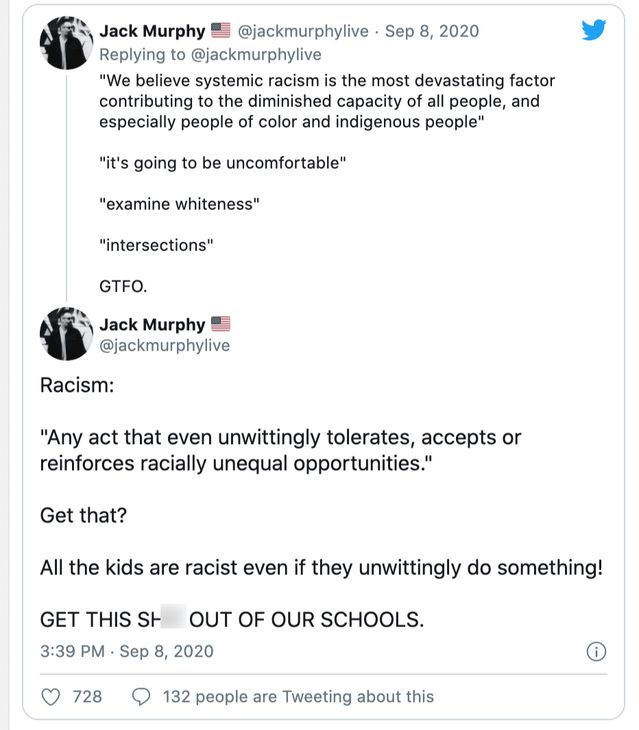 The content even includes teaching concepts that the Smithsonian’s National Museum of African American History and Culture (NMAAHC) was criticized for and eventually removed from its website:

"Our first lesson will focus on the recent events in Kenosha, Wisconsin. We will use Glenn Singleton’s Compass for courageous conversations about race to guide our discussions. We will review the compass for all students. Attendance will be taken."

WTF DOES THIS MEAN?

The Courageous Conversation list is a summary of the tenets of Western culture after the Enlightenment. It borrows from the Judeo-Christian tradition and the Enlightenment. Together these concepts have brought forth more knowledge and improved more lives through individual freedom and individual rights than any other system. People come from all over the world get to share in the prosperity these values have created.

Yet now Jack’s children are being taught these values are “white.” It is not hard to see how this type of rhetoric removes agency and expectations from minority students. Instead of encouraging them to participate in a system that creates wealth and success, schools tell minority students that this is a system of oppression. Then Jack shared some tweets from the author of the curriculum his children would be presented:

As if there were any doubt.

If you don't do what we say, you're racist.

Don't like it? You're even more of a racist.https://t.co/WFzHBES5hy

After sharing an example of a presentation from Courageous Conversation and disclosing that he had been barred from observing the program, Jack shared that he was connecting with other parents to rid his district of this divisive and discriminatory content. The content clearly classifies children by race and attributes behavior to them solely on that basis.

These examples are just the tip of the iceberg. Behind the paywall on BlazeTV, Glenn Beck is completing a two-part special on curriculum like this. Much of it is not special programming like what Jack’s high school students will be taking. Social justice and critical race concepts are incorporated into science, math, and other subjects beginning in kindergarten.

Trump’s Right: ‘Our Children Are Taught to Hate’ America, and Betsy DeVos Should Take Radical Action to Fix It

A whistleblower showed Beck hundreds if not thousands of pages of lessons and materials provided to teachers throughout the country. Sometimes this is not a district-level decision. It is a classroom teacher’s decision. Beck has posted the link to a Google Drive with the curriculum for New York City schools. However, he is getting reports from parents all over the country as well. If you have children or grandchildren, I suggest you take a peek.

Betsy DeVos went on Beck’s program and encouraged parents to take local action. While she is looking at options federally, it is not a simple process to remove this curriculum. Unlike the directive Trump issued to federal agencies, states and local governments have a fair amount of control over what lessons teachers teach.

The DOE should take an immediate role in alerting parents about these programs. The department should also issue guidance on how parents can effectively petition local school boards and exercise their rights under federal education law. The best outcome may be an expansion of school choice that involves innovative solutions for low-income communities.

These critical race programs will increase under a Biden administration. He has already committed to crippling school choice in service of the teachers’ unions. These are radical organizations pushing a far-left agenda nationwide. Even worse, he has vowed to appoint a leader from one of these unions to head up the DOE.

Should this happen, we will move that much closer to raising another generation of activists, rather than the chemists, engineers, and other skilled professionals we need. For our children’s sake, we can’t let that happen.

Editor’s Note: Want to support PJ Media so we can continue telling the truth about what the Left is up to? Join PJ Media VIP TODAY and use the promo code LOYALTY to get 25% off your VIP membership.

Trump Takes Aim at Marxist Propaganda Behind the BLM Riots

The Real Problem With ‘Anti-Racism’