'Ghostbusters', Drive-ins and Marching Forward Together

BUTLER, Pennsylvania — Last Monday was supposed to be a celebration, a coming together across the ages and across the country to mark the day “Ghostbusters” debuted in 1984, a film that made movie executives cringe but won the hearts of moviegoers. The film was going to be shown at drive-in theaters from coast to coast.

John Mason, owner of Starlight Drive-in Theater, said he was thrilled to be part of the first simultaneous showing of the iconic film in drive-ins. To get into the spirit and add some kitsch to the local version of the nationwide event, he even booked a local group that was going to come out in full ghostbusting gear.

“They even had their own Ecto ambulance,” Mason boasted of the iconic 1959 Cadillac. The vivid scene in which the firehouse doors burst open and the ECTO-1 license plate flashes across the screen remains a fan favorite.

All that changed when the official Ghostbusters Facebook page announced the event had been canceled, with hopes of rescheduling. The page said, “it does not feel like the time for celebration right now,” a reference to the protests across the country in reaction to the death of George Floyd in police custody.

After three months of isolation; job losses; illness; and death under the vengeful eye of a pandemic that collapsed a robust economy, stole lives not fully lived and robbed people of the dignity of work, people were already on the brink of emotional collapse when Floyd was killed.

The riots that followed and caused destruction to families and communities in the way of their wrath have left us exhausted and looking for small bits of solace and hope, or just silly fun to escape the fire, like going to the drive-in with your family or friends.
Canceling that event or any other community event just as people are allowed to go out and start living their lives might not be the best way to help us heal, Tom Maraffa, professor emeritus at Youngstown State University, argued.

“We can both grieve from the effects of the pandemic, support the protests and still go to a drive-in movie,” he said.

He pointed to the space launch two weeks ago as one of those moments, when millions of people gathered in front of their televisions with their spouses, children, grandchildren and neighbors, or stopped what they were doing and pulled the event up on their phone.
“The public loves to be part of something bigger than themselves, whether it’s a space launch or everybody watching a goofy movie from the ’80s together,” said Maraffa.

“Throughout tragedy in our history, there was a conscious effort to do things that were celebratory, from the World Series after 9/11 to playing football after the Kennedy assassination,” he said. “People looked at other aspects of their life and didn’t just stop doing things that brought them joy or comfort.”

Prior to the country starting to open up, drive-in theaters were one of the few places people could go to enjoy entertainment with their families and friends and not violate the strict guidelines of the pandemic.

When some enterprising churches and parishes started utilizing them for religious services, the people in this country who had forgotten about drive-ins’ charm were quickly reminded that there was one not that far from their home, and the utility of drive-in theaters was celebrated.

Mason and his wife bought the Starlight Drive-In five years ago. It wasn’t on a whim. It was based on love and personal experience at the iconic theater that has sat in a lull surrounded by the rolling Allegheny Mountains for what seems like forever to locals.

Then they set out to do things differently. They made three screens digital projectors and eliminated the other two because they didn’t hold enough cars to handle the $70,000-per-screen investment to go digital. They rewired the screening, updated the cooking equipment and updated the interior of the food stand including bathrooms.

“It has been a huge investment, time and money. People will constantly second-guess for saving the drive-in and keeping it open, but I think, in the past few months, people have started to understand our value,” he said, adding, “We’re getting a lot of first-timers, and we’re getting grandparents bringing their grandkids for the first time.”

There are 305 drive-in theaters with 549 screens located across America, according to the United Drive-In Theater Owners Association. Pennsylvania and New York are tied with the most at 28. Alaska, North Dakota, Delaware, Louisiana and Hawaii are the only states with none.

New Jersey is the home of the first U.S. drive-in theater, which opened in the summer of 1933, in the middle of the Great Depression.
Drive-ins, in many ways, are a symbol of Americana, an invention of pure necessity: It gave middle-class families an affordable way to see a first-run movie and eat great diner food with their sometimes-noisy children without having to hire a sitter.

Canceling Ghostbusters Day won’t cause the country to collapse, nor will it halt our march forward to find things to pull us together, as long as we, as a culture, continue to understand that the best way forward is together, and that a little popcorn and mindless fun won’t diminish that march. 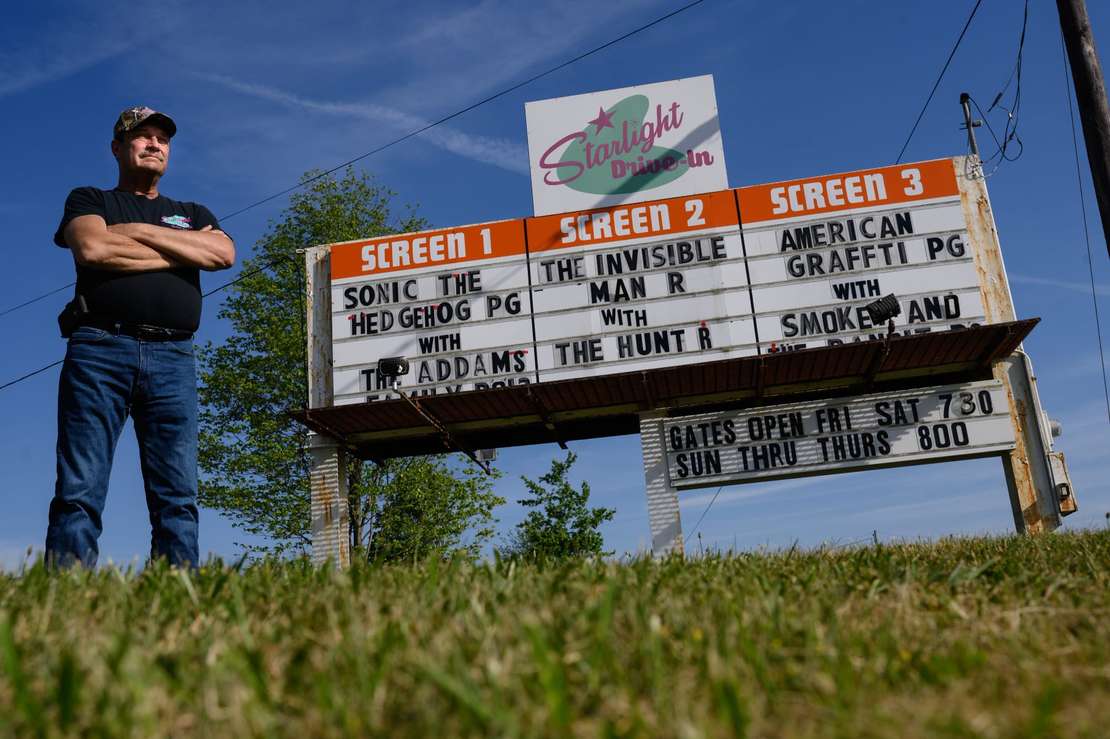 Starlight Drive-In owner John Manson has managed the business, which was built in 1958, for five seasons. Photo credit Justin Merriman.