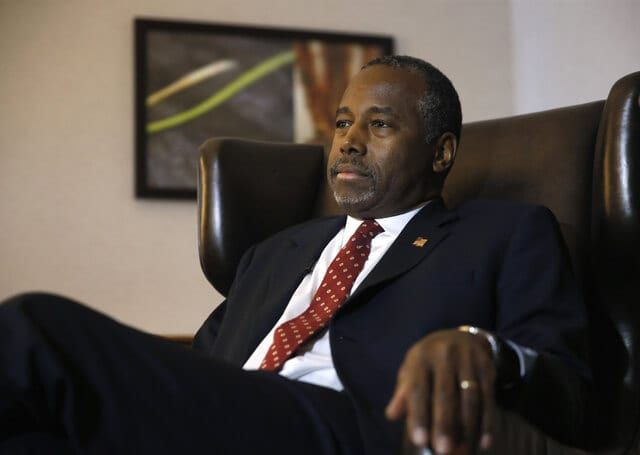 Imagine a world where politicians deny the basic rights of countless people, claiming that they are not even people. Journalists refuse to acknowledge the dignity of an entire group of human beings because it is politically expedient. Those who oppose this moral wrong are told they should “live and let live,” that what other people do with their own property is none of their business.

Does this situation describe America in 1858, or the United States in 2015 as opponents face one another in the abortion debate? Ben Carson says it describes both, and Abraham Lincoln’s words lend credence to his argument.

Popular Sovereignty and the Pro-Choice Movement

Presidential candidate Ben Carson recently compared the abortion movement to the pro-slavery movement before the Civil War. In particular, he connected the supporters of slavery with the so-called “pro-choice” movement today.

“During slavery — and I know that’s one of those words you’re not supposed to say, but I’m saying it — during slavery, a lot of slave owners thought they had the right to do whatever they wanted to that slave, anything they chose,” Ben Carson told NBC’s Chuck Todd. “And what if the abolitionists had said, ‘I don’t believe in slavery, but you guys do whatever you want’?”

That is exactly what many northerners did say, however, Illinois Senator Stephen Douglas foremost among them. Douglas supported “popular sovereignty,” the idea that the voters in a new state should be able to decide if that state would allow slavery or not. Douglas supported the Kansas-Nebraska Act (1854), which allowed the territories of Kansas and Nebraska to decide if they would enter the United States as free states or as slave states.

Of course, any black slave brought into Kansas or Nebraska would not get a vote, so the term “popular sovereignty” is a misnomer. A little known Illinois lawyer, Abraham Lincoln, launched a tremendous political career by giving a speech in Peoria on October 16, 1854. In that speech, he eloquently eviscerated the idea of popular sovereignty.

Slaveholders argued that black slaves were inferior to whites — that they could not govern themselves and therefore needed slavery as an education. This patronizing view held that blacks were less human than whites, and therefore they should not enjoy equal voting rights. Popular sovereignty implicitly accepted this view — by only opening the franchise to slave-holders and not to slaves themselves.

Similarly, the pro-choice movement accepts the dehumanization of an unborn baby. Pro-choice advocates place the concerns of the mother over the life of the child by arguing that a woman ought to have the right to choose an abortion. They automatically assume that there is only one person involved in the decision.

Even Slaveholders Knew Blacks Were Human

The most important part of Lincoln’s argument, however, is not that popular sovereignty is a false compromise, but that even the slaveholder implicitly knows that blacks are human. The argument that a slave is mere property is disproved, not by Lincoln’s words, but by the actions of slaveholders themselves.

Lincoln sums up the popular sovereignty position — “Inasmuch as you do not object to my taking my hog to Nebraska, therefore I must not object to you taking your slave. Now, I admit this is perfectly logical, if there is no difference between hogs and negroes. But while you thus require me to deny the humanity of the negro, I wish to ask whether you of the south yourselves have ever been willing to do as much?”

Southerners did not treat blacks like pigs, Lincoln explained. Indeed, in 1820, both the North and the South voted to outlaw the African slave trade, and to punish every slave trader with death. “But you never thought of hanging men for catching and selling wild horses, wild buffaloes or wild bears,” Lincoln pointed out. Also, while whites allowed their children to play with blacks, they kept their distance from slave traders and their children. This stigma did not extend to people who sold pigs, cows and horses.

“These sympathies in the bosoms of the southern people, manifest in many ways, their sense of the wrong of slavery, and their consciousness that, after all, there is humanity in the negro,” Lincoln declared. Even the slaveholders themselves could not keep up the fiction that black slaves were less than human, mere property to be bought and sold.

Similarly, modern Americans by their very actions show they do not believe the falsehood that an unborn baby is merely a “clump of cells.”

The high cost of fetal surgery — treating a baby while in the womb — shows the lengths many parents will go to care for their unborn children. In 2012, surgeons removed fetus Elijah Leffingwell from his mother’s womb in order to remove a tumor from his left lung. Even though the procedure cost $12,000 and Elijah’s heart stopped beating halfway through, the little boy is now healthy, happy and over two years old. This miracle shows how highly Elijah’s parents treasured his life.

Hospitals estimate that American mothers pay between $4,000 and $45,000 for prenatal and birth care, the New York Times reported. While this reflects the high cost of healthcare, it also speaks to the high value mothers place on their children. The fact that people spend thousands of dollars on prenatal care to save some babies proves that Americans consider these little ones sacred.

The philanthropic community also provides prenatal and delivery care at over one thousand clinics across the country, for mothers who can ill afford these costs.

Finally, Americans also look askance at abortionists. Retired abortion provider Robert Livingston claimed that the stigma against abortionists has increased since Roe v. Wade. Livingston performed abortions in the 1960s when the practice was still illegal, but he says the stigma is even worse today. “The atmosphere is so ominous now. I wouldn’t know where to begin.”

If Americans truly believed that unborn babies are less than human, they would not spend thousands on care, or treat abortionists with distrust. Thirty-eight states have fetal homicide laws, which impose strict penalties on crimes against a pregnant mother, especially if her fetus dies.

If society does not treat unborn babies as mere “clumps of cells,” why should pro-lifers be pressured to do so?

Struggle Between Selfishness and Justice

“Slavery is founded in the selfishness of man’s nature,” Lincoln argued, while opposition to slavery is founded in “his love of justice.” The slaveholder argues that blacks are property because he makes a profit from them, while the abolitionist disagrees, not to steal from the slaveholder, but to uphold the sacred truth that all men are created equal and endowed with inalienable rights.

As slavery sought to take away the right to liberty, abortion targets the right to life. As in the case of slavery, many people profit from abortion — monetarily and in other ways. Irresponsible men profit by being able to have sex while pushing the consequences on the woman. Planned Parenthood profits — an estimated 86 percent of the organization’s non-governmental revenue comes from abortion. The organization also allegedly profits from the sale of aborted infants’ body parts, as revealed this summer by videos from the Center for Medical Progress.

In Lincoln’s day, abolitionists fought to defend the universal right to liberty — today, pro-life advocates fight for the right to life. Blacks and unborn babies are just as human as anyone else, and have the same inalienable rights. Southerners knew this then, and Americans know it today.

Do not expect pro-lifers to accept what Americans implicitly deny. All men are indeed created equal, and endowed by their creator with the right to life, liberty and the pursuit of happiness.