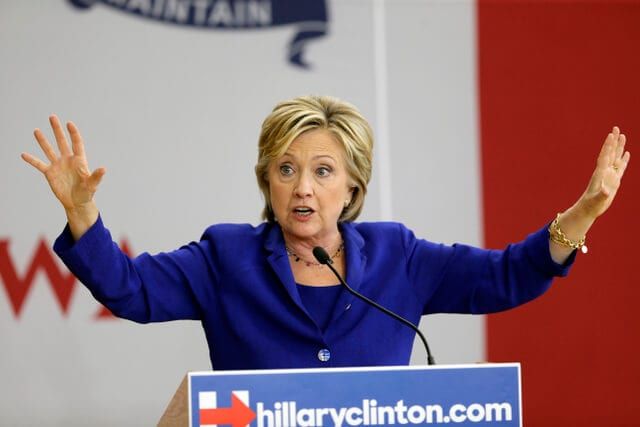 Hillary Clinton, the one Democratic candidate who had not yet declared opposition to the Keystone XL oil pipeline, finally folded to environmentalist pressure. Although she tried to bury the news, declaring her opposition on the day Pope Francis landed in Washington, D.C., not everyone was distracted.

Indeed, a politically powerful union which supports the Keystone pipeline decided last week that it would not support Clinton, despite having backed Barack Obama in 2008 and 2012. U.S. leadership of the International Brotherhood of Teamsters voted 26-0 against endorsing her, declaring that they will not support any presidential candidate “at this time.”

The timing of this decision — a week after Clinton announced her opposition to the pipeline — seems suspect, especially in light of the fact that the Teamsters waited until February to endorse Obama in 2008.

Hillary: Keystone XL Is a “Distraction”

While declaring her opposition to the oil pipeline, Clinton called the issue “a distraction from the important work we have to do on climate change … one that interferes with our ability to move forward with all the other issues.”

Mrs. Clinton has a penchant for dismissing issues that paint her in a bad light as “distractions.” The private emails she sent as secretary of state which jeopardized classified information? Distractions. Allegations of foreign donations to the Clinton Foundation found in Peter Schweizer’s new book “Clinton Cash”? Distractions. Even when Clinton finally takes a stand on an issue — the Keystone pipeline — after waffling for five years, it must be a “distraction.”

In her haste to move on from this “distraction,” Clinton did not attack the Keystone XL oil pipeline in the manner that many environmental groups do. She did not argue that the pipeline would increase carbon dioxide emissions or detract from President Obama’s climate policies. She notably refrained from such statements of hyperbole as calling the pipeline “game over for the climate.”

Clinton refrained from these statements because they are demonstrably false. Studies from the State Department and the Council on Foreign Relations agree that the pipeline will have very little impact on climate in the long run. Canada will continue to extract oil from the tar sands, and that oil will be consumed, with or without the pipeline.

After “11 volumes of analysis,” the State Department reached a rather uninspiring conclusion: “No single infrastructure project will alter the course of oil development in Alberta.”

On the other hand, using the pipeline could decrease the amount of emissions involved in transporting the oil, the State Department report found. Rail transportation, in place of the Keystone XL pipeline, “would result in 28 percent to 42 percent more emissions than the pipeline.”

In their statement declining to endorse Hillary Clinton, the Teamsters embedded a subtle critique of her latest position. The organization encouraged “both Democratic and Republican lawmakers to work together to focus on creating good jobs through investment in our nation’s infrastructure.”

Teamsters general president Jim Hoffa promised that “the Teamsters will work with and support any candidate who puts the needs of America’s working families above the deep pockets of their corporate donors.”

Building the Keystone XL pipeline would generate about 1,950 annual construction jobs in Montana, South Dakota, Nebraska and Kansas. It would also boost U.S. domestic product by $3.4 billion. This is why the AFL-CIO, another large national union, supports the project.

“We think that anything that’s going to create jobs, help the country and do it in an environmentally sound way ought to be done,” AFL-CIO president Richard Trumka told the Washington Post.

Since August 2014, the international price of oil has dropped from $105 per barrel to $50 per barrel. This has destabilized oil-based economies like Russia and Venezuela, and some have speculated that it could hurt the incentives behind the Keystone pipeline.

“Lower oil prices reduce both the costs and the benefits of approving the Keystone XL pipeline by reducing the odds that it will ever be fully used,” explained the Council on Foreign Relations’ Michael Levi.

Nevertheless, TransCanada, the company bankrolling the project, remains committed. “We are firmly committed to moving forward with the project,” spokesperson Mark Cooper told PJ Media in an email statement. “It is now even more important for our shippers, as it is the safest and most cost-efficient way to transport needed energy.”

“Our shippers’ existing projects have a long life cycle and are less impacted by short-term spikes or declines in commodity prices,” Cooper added. He explained that many contracts last for 18 or 20 years.

“Also, keep in mind that the U.S. still imports seven million barrels per day of crude oil from places such as Venezuela and the Middle East,” Cooper explained. “The oil Keystone transports is from Canada and the U.S., and will make America less reliant on oil from countries that don’t share North American values.”

Current Status of the Pipeline

The Keystone project was approved by Nebraska Governor Dave Heineman in January 2013, but many Nebraska landowners were unwilling to give their land over to the project. Originally, TransCanada sued to take the land under eminent domain, but this past week, the company decided to halt those actions and to apply through the Nebraska Public Service Commission (PSC) to seek approval for the project instead.

“We believe that going through the PSC process is the clearest path to achieving route certainty for the Keystone XL Project in Nebraska,” Cooper told PJ Media. Choosing this process “ultimately saves time, reduces conflict with those who oppose the project and sets clear rules for approval of the route.”

According to Cooper, Nebraskans in numerous reviews also supported this process.

Some have speculated that TransCanada chose this method to further slow down the process — “hoping that by 2017 a potential Republican administration would approve the project or opposition to it would simmer down,” in the words of the Wall Street Journal’s Amy Harder.

Indeed, positions on the pipeline tend to follow partisan lines. This year, the bill to construct Keystone XL passed both the House of Representatives and the Senate. President Obama vetoed it, however, and the State Department is continuing its investigation.

All the Democratic candidates for president in 2016 oppose the XL pipeline, while each Republican candidate supports it.

Former Hewlett-Packard CEO and current presidential candidate Carly Fiorina wasted no time in attacking Clinton for opposing the pipeline. “How long did it take Hillary to take a position on this? Two years,” Fiorina said. “She said she wouldn’t sign it because she thought it would complicate our effort.”

“Clinton has never created a job, saved a job, and her policies destroy jobs,” Fiorina declared. She reiterated the State Department study which said rail transportation harms the environment more than transporting Canadian oil by the pipeline. “What we’re doing now to transport that oil is far worse for global warming.”

Fiorina lamented the jobs lost without the Keystone pipeline. “Those livelihoods, those communities are being sacrificed not at the altar of science, but at the altar of ideology,” the candidate declared.