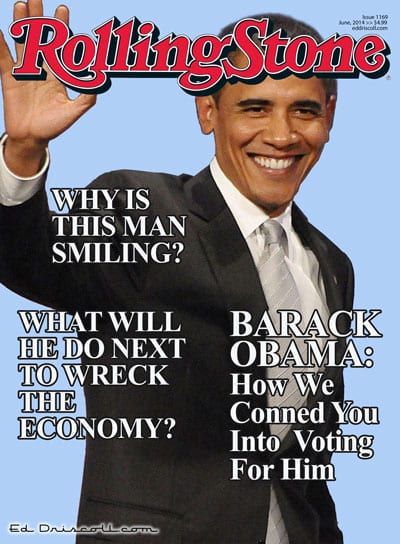 More years ago than I would care to admit, I was a fairly avid reader of Rolling Stone magazine. I bought it to read about musicians, and definitely not for its political and economic “analysis,” which I recognized even in my early 20s as incurably weak.

In the intervening years, founder and publisher Jann Wenner, through capitalistic endeavors such as RS and other publishing ventures, has built a net worth estimated at $700 million. Despite his membership in the One Percent, Wenner’s flagship magazine still strikes the edgy pose. RS even cast its lot with the thankfully short-lived incoherent, filthy, violence- and crime-infested Occupy movement.

While the magazine devotes inordinate resources to musical acts whose mission appears to be to ensure that every inner-city neighborhood becomes utterly unlivable, its non-entertainment writers continue, as they have for almost two generations, to mislead and deceive low-information voters who think they’re high-information masters of political and economic thought — that is, when they’re not engaging in misogynism and racism which would end any conservative writer’s career in a heartbeat or openly advocating communism. I can’t say I’ve heard whether Wenner would be down with the idea of letting “each family can keep one mansion and one luxury car, but the rest is forfeit,” or  with having “Everything Owned by Everybody.”

A month ago, the magazine’s Sean McElwee presented an extraordinarily hostile pack of lies titled “Six Studies That Show Everything Republicans Believe is Wrong; It’s time for the right wing to stop lying about the minimum wage, taxes, global warming and more.” Addressing McElwee’s dreck now is timely, given recent news about the rise and fall of a noted soak-the-rich proponent.

The guy claims to have interned with Fox News’s John Stossel; he obviously didn’t learn anything. The first and most obvious lesson missed is that there’s a vast difference between “Republicans” and “conservatives.” The former are all too often jaded insider participants who are okay with the country going to hell in a handbasket as long as it does so in slow motion. The latter are usually best described as “sensible people.”

What follows after the page break are the six antidotes to Sean’s six portions of poison.

Studies done by liberal economists desperate to support a statist agenda claim there’s no impact. That might conceivably be true within a very narrow pay range. If the cost of adjusting a company’s workforce and reassigning tasks is greater than the nominal costs associated with a small minimum-wage increase, the company may choose to do nothing in response — especially if it believes it has the ability to raise prices a bit to cover the added cost.

But the Obama administration is not considering a small increase. It’s pushing a 39 percent hike from the current $7.25 an hour to $10.10. Econ 101, which McElwee also apparently missed, tells us that if you increase the price of something, purchasers will buy less of it. At some point, they’ll start substituting capital for labor. Not coincidentally, McDonalds Europe recently purchased 7,000 touchscreen kiosks designed to replace cashiers. Consider it a field test to protect the company if the $15-an-hour crowd gets its way in the U.S.

2. The Stimulus Created Millions of Jobs.

Unfortunately for McElwee and the leftists who peddle this fantasy, the economy lost 3.62 million payroll jobs during the first twelve months after the stimulus plan’s passage. Eight of those months came after the recession as officially defined ended in June 2009. The economy’s job growth since the February 2014 trough has been the slowest since Harry S. Truman was president. Unemployment still hasn’t fallen to the 6 percent level the plan’s promoters promised would be reached in early 2012.

The best argument against this tired claim is that partially un-taxing the rich led to economic booms in the 1960s, the “Seven Fat Years” from 1983-1990, and (with the help of welfare reform increasing the supply of labor) Bill Clinton’s second term. Until the POR (Pelosi-Obama-Reid) economy appeared in the spring of 2008, the economy generally grew nicely for a quarter-century with only two historically minor hiccups. Even Clinton himself “famously answered ‘No’ when asked if any nation had ever taxed its way to prosperity.”

The alleged goal of taxing the rich disproportionately is to reduce income and wealth inequality, both of which are allegedly on the rise, according to left-revered Thomas Piketty. There’s only one problem: Last week, Chris Giles at the Financial Times found that accidental and deliberate errors in Piketty’s work completely nullify the French economist’s conclusions. In other words, “There is no obvious upward trend (in wealth distribution).”

4. Global Warming Is Caused by Humans.

Global temperatures haven’t budged for almost 18 years. The so-called 97 percent consensus that any human-caused warming is dangerous “is a fiction.”

Climate alarmists’ decibel level is inversely proportional to their credibility. These days, they’re shouting about as loudly as they ever have.

5. The Affordable Care Act Is Working.

Meanwhile, we’re supposed to believe that Obamacare has nothing to do with the rise in part-time employment, the all-time record level of temporary employment, the first quarter’s “unexpected” contraction, or the roughly 20 recent unexpected drops in chain-store sales and/or profits. Sure, Sean.

6. Rich people Are no Better than the Rest of Us.

McElwee suddenly finds religion and strangely refers to “a rich man who refused to help the poor burning in hell.” Uh, no. The rich man was sent to hell for his lack of charity while on earth and begged God and Lazarus, the man he never helped, to warn his family of what would await them if they didn’t change their ways. To my knowledge, no Republican or conservative has ever tried to claim that rich people have a better shot of making it to heaven.

As to the portion of his complaint relating to outsized CEO pay, “progressive” policies have largely led us to this circumstance.

Bill Clinton’s infamous 1993 tax hike denied deductions for officers’ salaries in excess of $1 million (but notably kept them firmly in place for amounts paid to entertainers, actors, and athletes). Companies desperate to recruit and keep executive talent moved to a far greater mix of stock options in their compensation packages. The CEO-to-average worker pay ratio proceeded to shoot up like a rocket during the rest of the decade’s strong stock market. It actually fell a bit during the Bush 43 administration, and has moved back up during Barack Obama’s reign. Unfortunately, the correlation of pay with performance has weakened. This disconnect would not have happened but for the Clinton tax package.

McElwee claims that a historically high percentage of wealth today is inherited instead of earned. Assuming that’s so, a great deal of the blame for that relates to how difficult progressive policies have made it for new rich people to appear. Post-recession business start-ups are not hiring nearly as many people as analogous entrepreneurs did after previous recessions. They appear to be deliberately staying small.

Who can blame them? Becoming visible in Barack Obama’s 2014 America means becoming a target.

(Artwork based on a modified Shutterstock.com photo.)