Half a Loaf in Ohio's Issues Election

So what was the bigger news out of Ohio last night:

If you’re in the establishment press, the former means everything and the latter supposedly means nothing. The Associated Press, whose reporters are not so coincidentally represented by an aggressive, far-left union, is trumpeting Issue 2’s failure as one of organized labor’s “biggest victories in decades.” Decades? All of a sudden Barack Obama’s election in 2008 doesn’t count? Meanwhile, searches at the AP’s main site indicate that Issue 3 isn’t even on its national wire.

The truth is that for both Ohio and the other 49 states in the union, the Issue 3 result is potentially far more important, while in the Buckeye State itself, Issue 2’s failure doesn’t repeal the state’s growing fiscal challenges.

Issue 3 was an epic, unqualified victory for the Ohio Healthcare Freedom Alliance, the Tea Party-driven organization which orchestrated a successful petition drive and managed the fall campaign. By significant majorities in each and every one of Ohio’s 88 counties, Buckeye State residents told Washington, in the words of Chris Littleton at the Ohio Liberty Council, that:

Majorities in every county agreed with these four assertions. The margin of Issue 3’s victory was over ten points in every county save one. It passed handily in bluer-than-blue Cuyahoga County (margin: 58-42), home of the “Little Detroit” known as Cleveland (1950 population: 915,000; 2010 population: 397,000). Issue 3 even passed in Lucas County (margin: 56-44), home of Toledo, where a conservative Republican is even harder to find than a public-sector union rep willing to give up any pay, perks, or privileges. Issue 3’s tightest margin was in Ohio University-dominated Athens County, where it still passed by over five points. At least ten suburban and rural counties racked up victories by margins of greater than 3-to-1. Additionally, do not forget that Issue 3’s gigantic rout was achieved in an off-year election where Democrats and public-sector union employees were clearly far more motivated to turn out than the rest of Ohio’s voters.

Above all, and contrary to the establishment media’s furious spin, Issue 3 was no mere “Well, whaddaya think?” exercise. It also wasn’t “largely symbolic,” as a terse, unbylined regional report from AP arrogantly claimed. Symbolize this, guys and gals in the press and throughout the USA: The Ohio Healthcare Freedom Amendment’s text is now embedded in Ohio’s Constitution. Anyone who doesn’t like that result is going to have to force it out of there. It won’t be easy, even with the help of all of Dear Leader Barack Obama’s horses and all of Eric Holder’s men and women, assuming they even hang around long enough to see such an effort through. Any federal or other attempt to undo Issue 3 is by no means assured of success, even if the Supreme Court erroneously rules that ObamaCare itself passes constitutional muster. Folks in other states who wish to protect their fundamental freedoms should seriously consider going the same route as Ohio just did.

Though it wouldn’t have changed the result, part of the blame for the size of Issue 2’s loss rests with a disjointed, unfocused campaign effort which failed to counter opponents’ non-stop stream of flat-out falsehoods. Getting outspent 3-to-1 by largely out-of-state labor interests obviously didn’t help either.

As for the real-world impact of Issue 2’s failure, Kevin O’Brien at the Cleveland Plain Dealer identified it quite succinctly a few days before the election: “Advice to low-on-the-totem-pole union members: Don’t bother celebrating. Do get your resumes in order.”

I would add: “And quickly.” That’s because while Ohioans were voting down Issue 2, they also resoundingly rejected the mother’s milk of the public sector and its unions: tax increases. In Northeast Ohio, “most (school) districts seeking additional money were turned down,” including Akron, which will “have to find a way to trim $22 million from its budget.” The song was the same in Southwest Ohio, where layoffs loom in Cincinnati and five other local school districts after levy defeats. 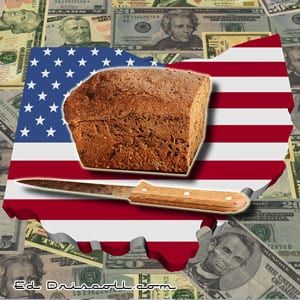 B-B-B-But I thought massive layoffs were going to happen if Issue 2 passed? Some layoffs might have occurred anyway, but the fact is that if the law known as “SB5″ had survived, districts would be better able to keep staff on board because of the law’s cost-sharing requirements, and would at least know that they can keep future wage increases at or below inflation. The track record of unions, especially those in the public sector, budging on any issue involving reduced pay or benefits is dismal. When faced with a choice between any kind of cut or layoffs, they have historically opted to jettison junior members — a tactic properly described as “eating their young” — even if some of those let go are outstanding workers or even teachers of the year.

The fiscal math which caused Ohio’s three largest newspapers to reluctantly support Issue 2’s passage hasn’t changed. Governor John Kasich and Ohio’s legislative majority will have to at least piecemeal some of SB5’s critical financial elements into law next year, because Ohio is not as far from becoming another disaster like Illinois as we might complacently like to believe.

Meanwhile, any time someone on the left tells you that the American people will eventually come to accept state-controlled health care, point to the Buckeye State. We — Ohio and the rest of the country — aren’t ObamaCare. That stance will prove far more relevant to 2012’s presidential election than Ohio Issue 2.

(Artwork based on multiple Shutterstock.com images.)