A May 5-9 poll released on May 11 by a polling partnership of the Associated Press and GfK Roper Public Affairs & Corporate Communications purports to show that Americans’ approval of President Barack Obama’s performance in office has risen to 60%, up from 53% in March and 47% in January.

As would be expected among the left-dominated press corps, all of a sudden the other daily presidential approval polls, virtually all of which show Obama in the high 40s and low 50s in the wake of the killing of Osama bin Laden (51% at Gallup, 46%-48% at Zogby, and 52% at Rasmussen, with a 37%-25% difference between those who strongly disapprove and those who strongly approve), mean nothing. Former Bill Clinton aide (and Gary Aldrich smearer, Linda Chavez targeter, and Good Morning America co-host) George Stephanopoulos crowed: “[A] new poll out just this morning shows President Obama with his highest approval rating in two years.”

AP reporters acted as if they had died and gone to heaven, issuing at least three lengthy items on various aspects of the poll’s results. Wednesday morning’s opening missive by Liz Sidoti and Jennifer Agiesta kicked things off, informing readers that a “comfortable” majority of the public “now call(s) Obama a strong leader who will keep America safe,” that America “now approve(s) of Obama’s stewardship of the economy.” With the 2012 presidential election still eighteen months away, “more people say he should get a second term than not” by a margin of 53%-43%! Maybe we should just cancel the elections and sing “All hail, King Barack!” Zheesh.

That evening, Robert Burns and Ms. Agiesta waxed ecstatically over the impact of the successful bin Laden operation: “Few events have sparked such soaring approval from the nation, and almost nothing has since George W. Bush’s handling of the U.S. campaign against terrorism in the months following the Sept. 11, 2001, attacks.” Almost nothing was a mighty convenient term to employ, giving the AP pair the ability to gloss over the fact that George W. Bush’s approval rating at Gallup rocketed from 58% to 71% in a single week in March 2003 as military operations commenced in Iraq.

Thursday morning, the wire service’s Jim Kuhnhenn engaged in an attempt to talk up the economy:

[T]he public’s brighter economic outlook also could signal a boost to the current recovery, which relies to a great degree on consumer behavior. A public that is confident about economic performance is more likely to spend more and accelerate the economy’s resurgence.

Well, if anyone should know, it would be an AP reporter, given that the wire service fully cooperated with the progenitors of the POR (Pelosi-Obama-Reid) economy in relentlessly talking down and erasing the business community’s optimism beginning in the spring of 2008 — up to and including what is probably still AP’s worst story ever: “Everything Seemingly Is Spinning Out of Control.”

It seems that the folks at AP and GfK are unusually on edge over their partnership’s most recent production. The report by Burns and Agiesta includes the following priceless paragraph:

Some conservatives criticized the AP-GfK poll as heavy with responses from Democrats that skewed the results. AP-GfK polls use a consistent methodology that draws a random sample of the population independent of party identification. … [T]he change in party identification in the current AP-GfK poll is not a statistically significant shift from the previous poll in March and could not by itself explain the poll findings.

Note that the AP reporters didn’t have the nerve to tell readers how “skewed” May’s poll was. Forty-six percent of those surveyed identified themselves as Democrats, 29% as Republicans, and 4% as independents (after classifying leaners); 20% didn’t know. By contrast, the latest available party identification results from Rasmussen as of April have the GOP at 34.8%, Dems at 33.5%, and 31.7% as not affiliated. Gallup, in an aggregate of 21 separate polls conducted last year, shows a Democrat-Republican split of 45%-44%.
Polling 101, or I guess I should say “Reliable Polling 101” considering AP’s laughable defense, is that for your samples to generate meaningful results they should not only should be random, but they must also be representative. AP-GfK polls since the beginning of 2010 have had the following partisan breakdowns: 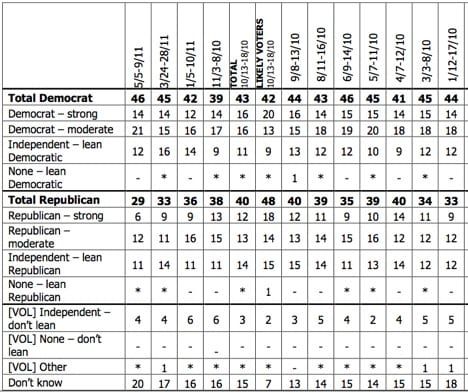 Excluding the likely voters poll in mid-October 2010, only two of the twelve results (April and November 2010) closely match the party-ID spread found at two of the most reputable polling firms in the country. Three of the other differences, at three and four points, are forgivably close and arguably representative. The other seven have Democrat-over-Republican differences of six points or more. Five of them, including the two most recent, are in double digits. AP-GfK’s most recent party-ID divergence is by far its largest. Truly random sampling from the beginning of 2010 through May 2011 should have resulted in a least a few of AP-GfK’s samples skewing Republican. Yet it did not happen even once. Random schmandom.

Contrary to what AP claims, at least five points of Obama’s seven-point improvement since March and at least eleven of the 13 approval points he has picked up since January can be explained by the vast differences in party identification between the three polls.

Most of the small remaining differences disappear because of moves between strong, moderate, and leaning within each party. Instead of capitalizing on the results as an opportunity for obsessive propaganda, the AP and the rest of the establishment press, assuming they have any latent desire to hang on to any reasonable claim of professionalism, should have reacted the way many of them seem to think we should respond to Obama’s stridently divisive statism: Nothing to see here; let’s move along.

Because the polls are not representative, and because they have become successively less so in their last three efforts, at least two dozen assertions made in the three AP reports cited above have no support.

In relaying the results of its partnership’s most recent polls as if they are legitimate, the Associated Press has made an utter mockery of its “Statement of News Values and Principles.” Consider this passage:

… [w]e insist on the highest standards of integrity and ethical behavior when we gather and deliver the news.

That means we abhor inaccuracies, carelessness, bias or distortions. It means we will not knowingly introduce false information into material intended for publication or broadcast.

AP-GfK’s polls are clearly inaccurate, careless, and riddled with distortions. AP is knowingly conveying false information in its publications and broadcasts. In its reporting on the partnership’s polls, the wire service is not doing what it purports to do — “bringing truth to the world.” The AP-GfK polling partnership should be rechristened “Absolutely Pathetic Garbage for Koolaiders.”