To me, one number stood out above all others in the fiscal 2012 budget released by the Office of Management and Budget (OMB) on Monday: $3.819 trillion. That number puts the exclamation point on four years of fiscal irresponsibility and legislative negligence on a scale not seen since the nation’s founding. If there’s a worse precedent in recorded human history, I’m not aware of it.

It seems that almost everyone has focused on what the White House projects to occur during fiscal 2012 through 2021. Two National Journal writers even had some fun assembling a cute montage of what you could do if you had the $3.73 trillion the administration would like to spend in fiscal 2012. Meanwhile, though some have noted that the White House’s projected fiscal 2011 deficit will be an all-time record $1.645 trillion, virtually no one has commented on the higher spending figure the administration says will occur this year — $3.819 trillion — to make that disastrous deficit happen.

The following graphic demonstrates how completely Uncle Sam’s situation has deteriorated since 2007, and how utterly unserious the administration’s plans for future fiscal recovery really are (results for 2007 through 2010 have been adjusted to correct for items footnoted below, previously discussed here and here): 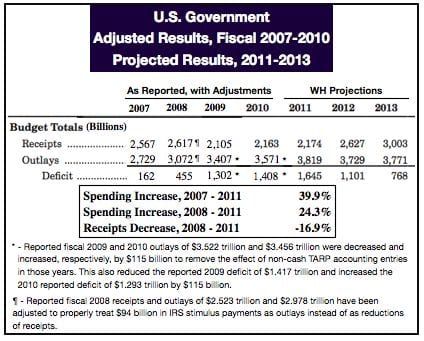 Contrary to established wisdom, and though it was way too little and way too late to get noticed by the electorate, the last budget passed by the GOP-controlled Congress in 2006 did a passable job of controlling spending growth. Their relative restraint, combined with the fourth consecutive spurt in receipts caused by George W. Bush’s 2003 tax cuts, caused the reported deficit for fiscal 2007 to fall to $162 billion.

Those were the good old days. Once Democrats Nancy Pelosi and Harry Reid became House speaker and Senate majority leader, respectively, everything started spinning out of control. Outlays leaped by 12.6% in fiscal 2008 (9.2% if the 2008 stimulus checks from the IRS are treated as negative receipts, as the government incorrectly did).

They were just warming up. Once Barack Obama became president, the spending spree began in earnest. Driven largely but by no means entirely by a stimulus plan that stimulated nothing, spending skyrocketed again in fiscal 2009, this time by almost 11%. Meanwhile, receipts in fiscal 2009 cliff-dived by over 19% from 2008. A fairly narrow deficit ballooned to over $1.3 trillion in just two short years.

You’d think that the free spenders would have needed a breather at this point. You would be wrong. After reversing the effects of TARP-related non-cash accounting entries designed to make fiscal 2009 look worse so fiscal 2010 would look better, the chart above shows that spending increased again, this time by almost 5%; the properly adjusted deficit increased by over 8%. Keep in mind that during this entire period, inflation was relatively tame.

But the all-time topper is the $3.819 trillion the administration expects to spend by the time the current fiscal year ends in September. It’s an average of almost $320 billion per month. The government didn’t spend $300 billion in any single month until October 2008. If this level of spending really occurs, the insulting 7% increase over fiscal 2010, piled on top of the previous three years’ injurious increases, will mean that Pelosi, Obama and Reid will have pushed up spending by almost 40% in just four years. It will mean that federal spending, according to the administration’s projections, will gobble up over 25% of the country’s annual economic output. That is by far the highest peacetime percentage since 1903, and almost certainly the highest in U.S. history.

The fiscal 2011 spending increase is happening even though the stimulus program was supposed to have ended during 2010. That hasn’t happened, but beyond that, departments whose spending has nothing to do with stimulus are continuing to go hog wild.

I would compare Congress’s budgeted 2011 outlays to what we were spending in 2007 or 2008, except for one thing, typified in this graphic grab from Page 64 of OMB’s report: 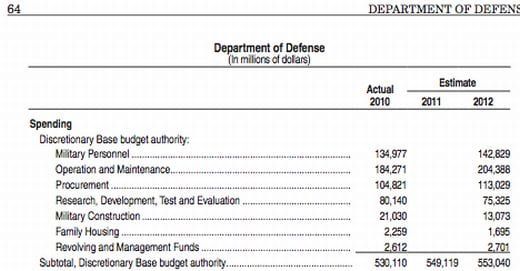 Unlike in 2010, there is no 2011 estimate. That’s because Pelosi and Reid’s Congress didn’t pass a 2011 budget. I don’t recall that Barack Obama has ever complained about that. If I’m right, no wonder; spending has been and will be on autopilot this year until somebody does something about it. Democrats consider that a feature, not a bug.

Well, something must be done. The ridiculous level of fiscal 2011 spending must be reined back as much as possible during the months which remain. The $100 billion reduction that got through the House last week is a start, but it must be pushed through the Senate so that the president will be forced to make a tough decision: start winning the future, or continue mortgaging the future?

Looking into future years, the message in the 2012 budget from the president and his party to the nation’s 80% non-liberal majority is clear: You don’t like what we’ve been doing? Just try and stop us.” They’re betting that the American people and their representatives, even when facing the financial abyss — an abyss brought even closer by what Investors Business Daily has called “Obama’s Gutless Budget Proposal” — won’t have the stomach to do what must be done. Whether or not they’re right may be the most important fiscal question we ever face.