While we wait for the finalized deficit numbers from the Treasury Department, what we already know about the results of the past fiscal year should be enough to make anyone sick.

The Congressional Budget Office last week estimated that Uncle Sam’s deficit for the fiscal year that ended on September 30 was “about $1.4 trillion.” You know that things are out of control when the word “about” precedes a figure so large that only goes out to one decimal point.

That $1.4 trillion is more than triple last year’s deficit of $455 billion and almost nine times the $162 billion recorded in the fiscal year that ended on September 30, 2007.

Well over half of the “about” $945 billion increase in the reported deficit ($1.4 trillion less $455 billion), or roughly $520 billion, is due to decreases in receipts from economic activity: 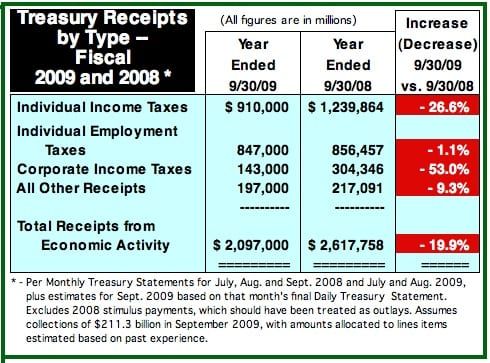 On a quarter-by-quarter basis, the decay in collections has mostly accelerated. Here’s the year-over-year change in receipts from economic activity by quarter for the past two years:

You might think that the September 30, 2009, results are cause for cheer. Think again: 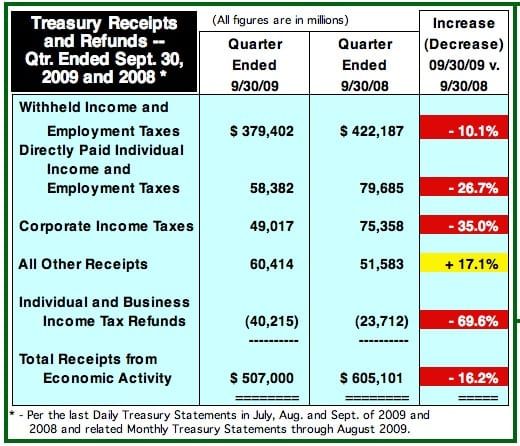 These results, based on looking at the sum of all daily receipts and refunds during the two quarters, show that serious current shortfalls have spread to the “withheld” category. By stark contrast, withheld income and employment taxes were actually 2.8% higher during the September 30, 2008, quarter than they were in the same quarter of 2007.

This is important and very problematic. Withheld receipts primarily consist of federal income and Social Security taxes taken out of employee paychecks. You would not expect that an increase of “only” 3.5% in the average seasonally adjusted unemployment rate (from 6.1% in July-September of 2008 to 9.6% during the most recent quarter) would cause receipts from withholdings to dive by 10%. But they have. I believe this is because:

Both employment itself and the utilization of those currently employed are not expected to pick up significantly any time soon. Given that probability, someone needs to explain to me how Uncle Sam’s collections are going to recover significantly. Though there appear to be differences between how Treasury and CBO define “receipts,” CBO’s June 2009 analysis projects that total receipts will go up by about 10% during fiscal 2010 compared to the almost-final result shown earlier, and by an astonishing 40% to an all-time high of over $2.9 trillion by fiscal 2012. On what basis?

On the spending side, year-to-date outlays of $3.27 billion through August 2009 were a breathtaking 18% higher than the previous fiscal year’s first eleven months. CBO estimates that the difference narrowed slightly during September. Big deal; the increase is by far the largest ever in dollar terms, and on a percentage basis makes the worst years of Republican-controlled Congresses look positively tame.

Even beyond that, the current year’s reported spending spree doesn’t even include the Troubled Asset Relief Program (TARP). Beginning with the release of its April statement, Treasury decided that TARP “investments” would be treated on a “net present value” (NPV) basis. Even though the cash had obviously been disbursed, Treasury’s change had the effect of reducing reported outlays through March by about $175 billion.

Since then, the government has “invested” billions more in General Motors and Chrysler, both during and after their respective bankruptcies. Just this month, both GM and Chrysler announced management shuffles in response to their deteriorating marketplace performances. Any accurate NPV accounting should carry these government “investments” at amounts much, much lower than the total of all funds disbursed. Doing so would, and should, add tens of billions to the final reported deficit. One would expect the necessary NPV accounting to be done before the government releases its final results. But this is the Obama administration we’re talking about. Who expects them to in effect admit that these two companies are already teetering?

Having gone through what has to be the worst non-wartime fiscal year in American history, Obama and the geniuses in control of Congress want to impose de facto energy taxes euphemistically referred to as “cap and trade” on almost anything that emits carbon, take over the health care system (because they have done so well with Social Security and Medicare), and impose a frightening array of other tax increases and new taxes that will almost definitely not yield the amounts predicted. All items noted would further pummel an already staggering economy.

We’re surrounded by either fools or knaves.

The support for the “knave” alternative is becoming more compelling. People who are serious about their desire for an economic recovery simply don’t do the things they have done and don’t propose the things they are proposing. What they want are things you would expect from the government of a banana republic, not the supposed leader of the free world.

When is someone going to ask Nancy Pelosi, Barack Obama, or Harry Reid, the folks who first gave us the POR (Pelosi-Obama-Reid) economy during the summer of last year, why they won’t put a halt to what has brought down the economy, and why they seem so grimly determined to keep it down?