With Obamanomics, We're Not Even Close to $eeing Green

In much of the Midwest, 2009 thus far has been a year of record rains, lots of snow, and lots of record low temperatures.

The bad news is that this year’s weather has presented unwanted challenges to farmers attempting to get their planting done in time, and that flooding has caused terrible hardship in some areas. The upside, besides the fact that it’s yet another anecdotal nail in the coffin of global warming alarmists, is that 2009’s weather thus far has made keeping the grass green a much easier task for most homeowners. When they look outside, they see healthy green growth and would agree that this year’s climate, for all of its other problems, has been pretty good for growing a lawn.

What in the world does this have to do with government receipts? Plenty, in a metaphorical sense. You see, in the spring of 2008, U.S. government coffers, like this spring’s Midwestern grass, also experienced a lot of healthy green growth. That’s because, despite the fact that the alleged recession-deciders at the National Bureau of Economic Research (NBER) still believe otherwise, the U.S. economy’s climate was pretty good. In fact, the results were so positive that the NBER’s apparent failure to consider federal receipt growth in their recession determination should be seen as almost negligent.

To appreciate just how good the supposedly recessionary second quarter was for Uncle Sam, it’s useful to look at the numbers in two ways. Here’s the first (the analysis excludes 2008 stimulus payments, which the government should have classified as expenditures; all figures are in millions): 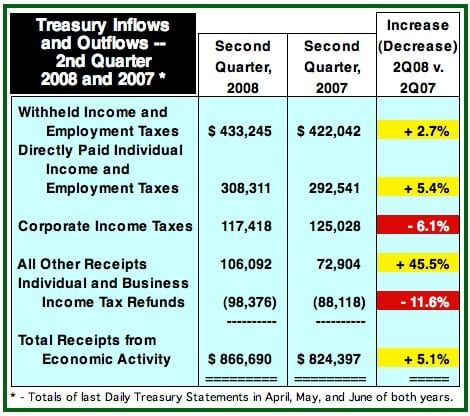 Second, confounding the alleged experts, taxes directly paid by individuals continued to soar in the year during which the effect of Bush 43’s supply-side tax cuts was supposed to wear off. April’s inflows in this category led to an all-time one-month record for federal receipts. What’s more (not shown), June 2008’s analogous figure, which consisted almost entirely of estimated payments, came in slightly above that of June 2007, indicating that entrepreneurs, investors, businesspeople, and others who pay quarterly estimates remained mostly optimistic about the state of the economy — at least on June 16, when the payments were due. Additionally, collections from economic activity during June 2008 were an all-time record for that month.

A very likely explanation for the decline in corporate receipts, and their larger decline to be revealed shortly, is that companies could not increase prices for their goods and services fast enough to recover the 25%-plus increases they saw in gas and other fuel prices during the quarter.

Well, what about the lines for all other receipts and the refunds? That’s why there’s a second chart: 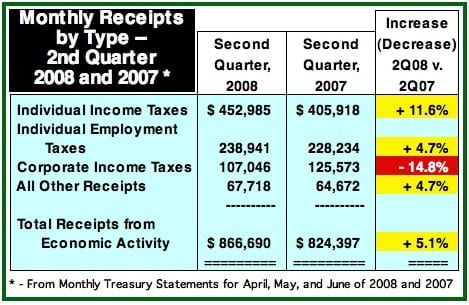 This chart shows even more convincingly that the Treasury’s second quarter of 2008 was a large improvement over the same quarter in 2007, thanks to a boomlet in receipts from individuals. The 5.1% overall increase in collections makes absurd the claim that the second quarter’s annualized gross domestic product growth of 2.8% (vs. 4.8% in the second quarter of 2007) — only 0.3% lower than the median GDP growth of the past 50 years — was somehow “artificial” because of 2008’s stimulus payments (which didn’t affect tax collections at all) or the run-up in fuel prices.

Someday, the alleged gurus at the NBER will have to make a convincing case why they think the economy slipped into recession during the first half of 2008 with two quarters of positive GDP growth, lower job loss (as a percentage of the workforce) than any other recession on record, and a boom in receipts from economic activity that kept going strong until June. They haven’t done so yet. If they don’t, it’s looking ever more likely that history will have to ultimately rule that these elitist emperors had no clothes.

Sadly, the receipts boom ended in 2008’s third quarter. Since then, the economy has been heading downhill and has been in a recession as normal people define it, i.e., two or more consecutive quarters of GDP contraction.

Why this has happened is not difficult to understand. It can be summarized in one word: “scared.” As Investor’s Business Daily noted on July 2 after the latest horrid employment report, “The private sector — the real engine of economic and job growth — won’t hire because it’s scared of what it sees coming out of Washington.” They also won’t expand, invest, or take most risks. Some, including yours truly, have characterized the reaction as a form of “going Galt.” The year-old scared posture has nothing to do with cowardice and everything to do with preservation and protection of the economic well-being of one’s self, family, employees, and other stakeholders.

The fright began with the inception of what I have been calling the POR (Pelosi-Obama-Reid) economy over a year ago. That’s when Nancy Pelosi, Democratic nominee Barack Obama, and Harry Reid began advancing their energy-starving, high-taxing, business-blaming agenda in earnest. In capsule form, the terrible triumvirate promised to destroy the necessary conditions for economic growth. In doing so, they (conveniently?) forgot that the collective expectations of the marketplace are a necessary ingredient for healthy green growth. The metaphorical grass began to turn brown. In the very next quarter, Uncle Sam’s year-over-year collections haul went negative.

The collections situation has only gotten worse as Pelosi, Obama, and Reid have done everything they can to inject intolerable uncertainty into seemingly every corner of the economy.

This, folks, is what a serious recession looks like from Treasury’s vantage point: 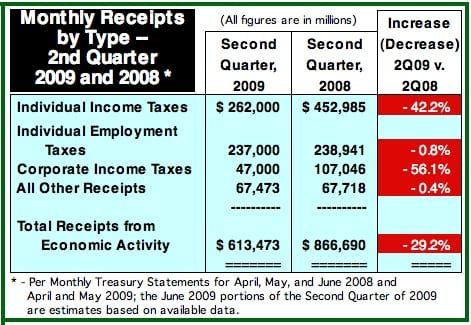 The earth is now indeed parched. The prospects of a return to healthy green growth appear very remote, especially since unaffordable energy taxes and statist health care are at the top of the elitists’ agenda. The more pertinent matter at the moment should be how to keep the grass from dying.