California has proposed the previously and supposedly unthinkable: ending welfare.

Before you get too outraged (or perhaps excited), “welfare” specifically refers to a single but significant program known in the Golden State as CalWORKs. It is California’s version of the nation’s welfare reform effort. Known as Aid to Families with Dependent Children until 1996, traditional “welfare” changed its name to Temporary Assistance for Needy Families (TANF) when Congress passed comprehensive reform. Then-President Bill Clinton, who had twice vetoed the legislation, finally signed it on the advice of then-adviser Dick Morris because “a third veto could [have] cost him the 1996 election.”

One has to go back to Ronald Reagan’s term as governor to find the last time this core entitlement program was really under control in the Golden State. As the late Paul Weyrich noted in a 2006 column, “Reagan managed significantly to cut welfare rolls while increasing support for those who really needed help.”

But by the mid-1990s, a mind-boggling 8% of the state’s residents, or almost 2.6 million people, were on the dole, almost double the percentage in the rest of the country.

Under welfare reform, the country’s bloated caseload dropped very quickly. In its first four years, about 2.5 million families came off the dole. In the vast majority of these families at least one adult entered the workforce. Huge numbers of formerly dependent tax consumers became economy-contributing taxpayers. This unprecedented mass transformation is an important but underappreciated element of the prosperity of the late 1990s.

During its first six years, welfare rolls came down in California at about the same rate as the rest of the nation. By the end of 2002, the number of families and total caseload in the state were down 47% and 55%, respectively, compared to 52% and 57% for the rest of the U.S. But as noted, California was starting from a much larger base. The state’s family and caseload declines should have been much, much steeper, but weren’t.

After that, while the rest of the country improved, California first mostly treaded water and then slid seriously backwards. The following graphs compare what has happened since 2002 in California with the rest of the U.S. (all figures are as of year-end except 2008, which is as of September 30; source data is at this U.S. Office of Family Assistance link): 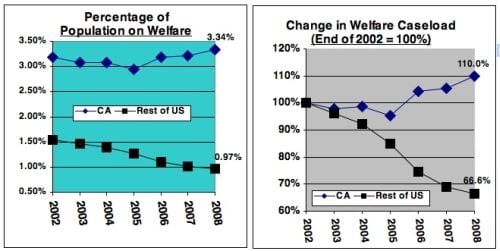 The first graph shows that while the percentage of the population on welfare in the rest of the U.S. has declined by over one-third since 2002, California’s percentage has actually increased. The state’s welfare dependency rate has gone from double to well over triple that of the rest of the country. The second graph shows that while welfare caseloads in the rest of the U.S. have dropped by almost 30% in the past five and three-quarter years — continuing to drop even during last year’s difficult economy — California’s caseload has actually increased by about 10%. A June 4 Sacramento Bee report tells us that 525,000 families, yet another 27,000 more than last September, are now on CalWORKs.

As a result, though it has only about 12% of the country’s population, California’s share of the total U.S. welfare recipients has risen from 22% in 2002 to 32% today. The state has a whopping 869,000 more people on the dole than it would if it mirrored the rest of the country.

There is no defensible reason why California’s caseload should be so obviously and seriously out of whack.

Is it because of immigration, legal or otherwise? No way. The percentage of the population on welfare in Texas and Florida is less than half of what it is in the rest of the country excluding California.

Could it be the state’s stratospheric cost of living? Nope. While above the national average, the percentage of the population on the dole in New York State, which of course includes the country’s most expensive city, is only 1.3%.

Is it the economy? Nice try; no sale. As shown, welfare rolls have continued to fall elsewhere. Additionally, in the year ended September 30, 2008, the number of TANF recipients in the economic basket case known as Michigan dropped by 16%, or over 30,000.

Sadly, it is much more likely that the state’s political establishment, Democrat and Republican, as well as its social services bureaucracy, have both resisted the fundamental national reforms passed 12 years ago at nearly every possible turn. Misplaced compassion here, and surely in other areas, has ultimately led to the state’s budgetary brick wall.

The fact that California is at least semi-seriously considering ditching CalWORKs entirely should serve as a warning to Washington political elites, as well as to the rest of us, who inexplicably keep returning most of them to power in every election. For generations, Democratic and Republican administrations have let demographic time bombs like Social Security and Medicare grow in explosive potential. What little tweaking has occurred almost always involved tax increases. Fundamental reforms such as individually controlled Social Security investment accounts and medical savings accounts have been either furiously resisted or watered down to the point of ineffectiveness.

In the not-too-distant future, barring the unexpected appearance of political will, when these and other time bombs amounting to over $50 trillion dollars detonate, it will be decades too late for tweaks and years too late for fundamental reforms. As with CalWORKs, discussions will commence not about mending, but ending.