The conventional wisdom (CW) is that under President Bush:

While its performance hasn’t been as good as it could have been, the Bush economy has acquitted itself well enough that the CW should be discarded.

Let’s start with the overall economy.

Based on quarterly economic growth data from the government’s Bureau of Economic Analysis (BEA), the economy is almost 19% bigger now than it was at the beginning of the fourth quarter of 2001, the first quarter that the new president’s first budget was in effect (three of the five quarters prior to that had negative growth, first because of the bursting of the Internet bubble, and in the case of the third quarter of 2001, the September 11 terrorist attacks). Real growth during that time has averaged 2.56% — not stellar, and not as good as the best of the Clinton years, but certainly not the awful performance the CW typically assumes.

Why hasn’t it been better? I’m not alone in arguing that the post-Enron wave of burdensome regulation imposed by the Sarbanes-Oxley (Sox) law has held the economy back, both by imposing onerous compliance costs on publicly traded companies, and by largely shutting off the initial public offering market to all but the most stellar candidates. The next president and Congress are going to have to do something to reduce the excesses of Sox if we are ever to return to consistent growth of 4% or more. 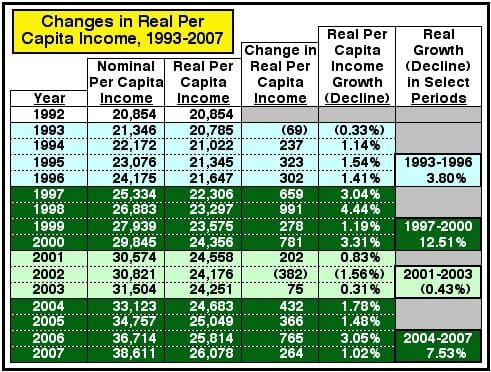 At the end of 2007, the average American was almost 8% better off than in 2002 ($26,078 divided by $24,176), the trough of the post-bubble, post-9/11 recession. Again, this is nothing to party hearty over. But keep in mind that BEA data excludes capital gains, the benefits of which tend to skew towards those with higher incomes; so the measurements listed above better reflect what “working people” are seeing than other available measurements.

Many of the same people who deride the Bush economy, especially its tax cuts, won’t face up to three very important points illustrated in the chart above.

First, the Clinton economy didn’t become anything special for the average person until 1997, the first year of Bill Clinton’s second term. Why is that? It certainly wasn’t because of the tax increases of 1993. It’s clear from the chart that, if anything, they held back an economy that, given the technology improvements that were occurring at the time, should have been roaring after the early-1990s recession.

It was the capital gains tax cut of 1997 that caused the big personal income gains. That cut actually began having its desired effect in the year it was passed because the Clinton administration telegraphed its desire for it shortly after the 1996 election. Investors assumed correctly that passage by the then-Republican-controlled Congress was assured. Thanks to that legislation, real per capita personal income skyrocketed over 12.5% during the administration’s final four years.

Second, real income during the Bush era didn’t take off until the 2003 investment-related tax cuts on capital gains and dividends took hold. Their positive impact on real income wasn’t visible until 2004. The 7.5% growth in real per capita income from 2004 to 2007 is also not as good as the best of the Clinton years, but, as noted earlier, you can lay a lot of the blame for that on Sox.

The third point is best made with a graph containing the chart’s final seven years, this time expressed in 2001 dollars: 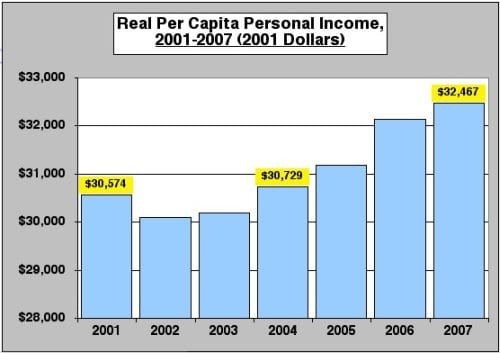 As you can see, the claim that “incomes have never gotten back to where they were before the recession” hasn’t been true since 2004.

But wait, haven’t all of those income benefits gone to the rich, leaving nothing for the poor and middle class?

This data from the Census Bureau released last year (PDF can be retrieved by going to this webpage) shows that the upper income limit and the mean household income of every income group presented went up in real terms from 2003 to 2006: 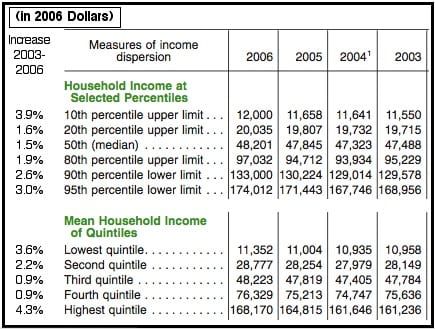 As I said when I posted on this last year, “I’m not claiming these results are where I would want them to be, but they are all positive. In fact, the household results show more real improvement at the lower income levels than is found in the middle and upper-middle.”

I should also point out that the Bush rate reduction in the lowest taxable income bracket from 15% to 10% has increased spendable income for those in the lowest income quintiles disproportionately since 2001, while helping all but the very highest earners.

Since we’re about to enter presidential campaign silly season, it’s probably too much to expect politicians to challenge the CW claims noted at the beginning of this column. But one would hope that reality-based observers know better.