The Associated Press’s economic reporting last week was another matter.

The wire service’s coverage contained clear errors of fact and obvious misunderstandings of the underlying data — enough of them to make it reasonable to wonder if the business reporters working at the self-described “Essential Global News Network” are up to their assigned tasks.

First, here’s an obvious bust, courtesy of Martin Crutsinger, as he covered the Orders report (bolds are mine):

The Commerce Department reported Tuesday that orders were up 1.1 percent in April following a 1.5 percent increase in March. Those gains followed big declines in January and March that raised concerns about how much pain manufacturing industries would feel from the severe economic slowdown hitting housing and the financial sector.

Yes, Crutsinger told us that March went up and down in successive sentences. In fact, it was February that declined (first 2008-labeled row at link).

This was far from AP’s worst error of the week.

In an unbylined article on ISM’s Non-Manufacturing Index, the AP’s reporter betrayed stunning ignorance of the meaning of a couple of key numbers:

The service sector grew at a better-than-expected pace in May but slower than in April, suggesting that higher prices for food and fuel may be crimping business in retail, entertainment, and agriculture.

… Another worrisome reading in the service report was that inventories rose 7 percent, while order backlogs fell 1 percent. If that imbalance persists, companies may have to cut production or buying as they reduce excess inventories.

That is not what the ISM report told us. Anyone who understands ISM’s reports would never have written the bold sentence above.

If the unnamed reporter had bothered to scroll down the report, he or she would have seen the following:

ISM’s Non-Manufacturing Inventories Index registered 54 percent in May, indicating that inventory levels grew in May after contracting in April. …

ISM’s Non-Manufacturing Backlog of Orders Index contracted in May. The index registered 49 percent, 1 percentage point lower than the 50 percent reported in April. …

ISM’s report stated that more respondents in May said that their inventories were increasing than said they were decreasing (in April, more were reporting decreases than increases). That’s it. The 7% change revealed nothing about the actual dollar amount of increase or decrease in inventories. Anyone even remotely familiar with business and commerce would know that a seasonally adjusted increase of 7% in inventories in one month across the entire economy would be cause for huge concern.

The point is similar with orders backlog. Barely more respondents in May said their backlogs had declined. Again, the result had nothing to say about their dollar amount.

The two results taken together aren’t an indication of “imbalance.” There’s nothing necessarily “worrisome” about them. What’s really worrisome is that an AP reporter knows so little about what he or she is covering.

Finally, on Friday, reporter Jeannine Aversa repeated the error she has made for several months running of treating seasonally adjusted jobs data as if it reflects what actually occurred in an individual month.

Aversa’s tone was especially shrill, even for her:

Pink slips piled up and jobs disappeared into thin air in May as the nation’s unemployment rate zoomed to 5.5 percent in the biggest one-month jump in decades. Wall Street swooned, and the White House said President Bush was considering new proposals to revive the economy.

… Help-wanted signs are vanishing along with jobs, so the unemployment rate is likely to keep climbing, a government report indicated.

However, BLS’s best estimate is that 648,000 more Americans were actually working in May than were working in April: 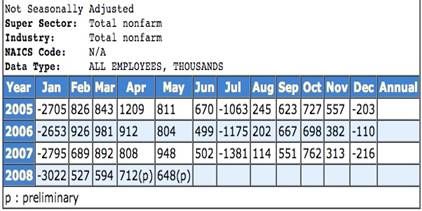 Aversa should have told us that May hiring was disappointingly low for the fourth straight month, leading to a net loss in seasonally adjusted jobs of 49,000. Her claims that “pink slips piled up” and of “jobs disappearing into thin air” are patently false.

Aversa’s “vanishing help-wanted signs” assertion probably doesn’t stand up in the real world either. Though the Conference Board’s Help-Wanted Advertising Index has been trending downward, the fact remains that as of April, the most recent report available, 35% of labor markets were reporting rising help-wanted volume. That’s hardy “vanishing.” I’ll bet those markets also have plenty of non-vanishing and quite visible help-wanted signs.

What’s really vanishing is the reliability of AP’s business coverage.

Many of AP’s subscribing news outlets accept and run the wire service’s reports on business and the economy without questioning them. If AP gets it wrong, much if not most of the country will be misinformed — and AP is all too frequently getting it wrong.