Two weeks ago, the American Family Association ended its boycott of Ford, which I highlighted in a recent Pajamas Media column. The organization claims to have gotten most of what it wanted.

You may be asking, “What boycott? I didn’t even know one had started.” Don’t feel bad. The Old Media studiously ignored it during its entire two-year run, including its end. Don’t let that lack of attention fool you. AFA’s Ford boycott was a very costly case of corporate stubbornness, and an object lesson to companies that rely exclusively on the Old Media for market feedback.

An earlier boycott call in 2005 was suspended. In November 2005, according to AFA, Ford agreed that it would do the following (paraphrasing the more verbose original at AFA’s now-moribund boycottford.com web site):

According to the AFA, the company did not keep the above promises. The boycott therefore began in earnest in March 2006. Given the boycott’s potential for serious damage, especially at a time when Ford’s business fortunes were heading in reverse, I expected the company to do something to rectify the situation quickly. That didn’t happen. Ford vastly underestimated the boycott’s impact. As I noted in late January:

I believe that Ford’s sales performance during the 24 months of AFA’s boycott supports my estimate of its reach: 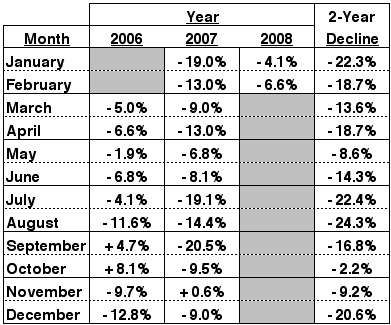 The average two-year monthly sales decline in the table above is 16%. That is a far worse result than occurred at the five other largest companies selling cars in the U.S. No doubt there have been other factors contributing to Ford’s decline, including weaknesses in its product line and efforts to reduce low-margin fleet sales. But given its scope, there can be little doubt that the boycott was an element of the downward spiral. How much did the AFA boycott cost the company? My estimate is a bit less than $1 billion in lost margins (the chart assumes that only 1% of 12 million boycott participants decided not to buy a Ford vehicle during the two years of the boycott; margin estimates and the truck/car breakdown are from this July 2007 Forbes.com article):

Why did the company allow it to go on for so long? False pride and stubbornness certainly played a part. But management hubris at the beginning of a boycott is not unusual. What Ford generally lacked was real-world feedback. (Not that management is totally off the hook; in August 2006, a group of dealers in Texas sent an open letter to the company begging it to do something. The suits in Dearborn paid them no heed.).

Month after awful month, the Old Media pretended that the boycott didn’t exist. The business press never considered that something might be happening other than what they read in Ford’s “the sky is not falling” press releases. Management therefore had little indication from anyone other than AFA itself — which it apparently refused to believe — that real boycott-related damage was occurring.

So what finally triggered the company’s change of heart? The comments at the aforementioned January 28 Pajamas column may have been a factor. In less than 24 hours (before they were turned off), readers posted 461 comments. The large majority of them were from boycott supporters, many of whom quantified how many vehicles they had purchased from other manufacturers. This was, as far as I know, the first time that such visible evidence of widespread boycott support had appeared in a widely read venue. This outpouring, combined with a dash of financial desperation, may have been what at last disabused the company of its long-held notion that the boycott didn’t matter.

The lesson? Companies cannot blithely assume that just because a PC-obsessed Old Media isn’t covering an event or development, it must not be happening or must not be significant. The AFA boycott has cost Ford dearly. If it doesn’t survive as an independent entity — a distinct possibility — we may look back on the boycott as the straw that broke the Blue Oval’s back.

Tom Blumer is a CPA based in Mason, Ohio, outside of Cincinnati. He presents personal finance-related workshops and speeches at companies, and runs BizzyBlog.com.