Is Salt Really Bad for Your Heart?

One of my first patients as a young doctor was a man with an unpleasant bowel condition called diverticulitis. The last time he had been in hospital, he had been told to eat a low-fiber diet, but since then the medical doctrine had changed (low-fiber diets having been discovered to be responsible for everything from bowel cancer and heart attacks to varicose veins), and I told him, with all the zeal of a convert, henceforth to eat a high-fiber diet.

Of course, medical advice must be dispensed according to the best available evidence of the time, but my patient, having been given diametrically opposing advice for the same condition, not surprisingly concluded that doctors did not know what they were talking about and that henceforth he should do what he liked.

For a long time now common salt has been regarded as the deadly enemy of mankind, and the less we take of it the better, the longer we shall live or at least fail to die of heart attack or stroke, or other consequences of raised blood pressure. The late Duchess of Windsor said that you could never be rich or thin enough; she might have added, if she had survived to the present, that you can never take too little salt. 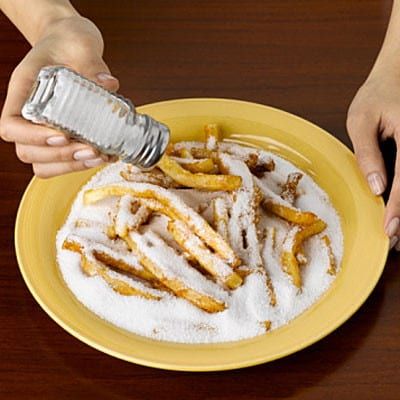 A recent paper in the Journal of the American Medical Association puts this received wisdom in doubt. Comparing the number of “cardiovascular events” (heart attacks, strokes, and heart failure) in people with various levels of salt intake — as measured by urinary output of sodium — they found not a linear relationship but a J-shaped curve. People with high salt intakes had a high rate of cardiovascular events; but so did those with very low intakes.

This, of course, puts public health doctors and health educators in a quandary. What should they now tell a public that is thoroughly persuaded — thanks largely to them — that there is death lurking in salt crystals, and that you might as well sprinkle your food with potassium cyanide as with poor old common salt? Why should anyone put any faith in them?

The world, said Boswell, should not be turned into a great hospital. A meal is not to be treated as if it were a medical procedure. If everyone could live a year longer by never eating his favorite food, would the light be worth the candle? Conversely, if life could be prolonged by eating something detestable, would it be worth living?

The paper in JAMA also showed that those with a high intake of potassium also had a low rate of cardiovascular events. Such is the state of popular hypochondriasis that this could lead to a run on bananas (high in potassium). When, some years ago, research was published that suggested — mistakenly in the event — that cardiovascular events were associated with or caused by low levels of selenium, a rare element, there was a run on walnuts (high in selenium), which disappeared for a time from the shelves.

I suppose the true moral of the paper in JAMA is that we should be moderate in our moderation.

Theodore Dalrymple, a physician, is a contributing editor of City Journal and the Dietrich Weismann Fellow at the Manhattan Institute. His new book is Second Opinion: A Doctor's Notes from the Inner City.
Read more by Theodore Dalrymple
SHOW COMMENTS