House Speaker John Boehner should give in to President Obama’s demand for greater tax revenues as part of a deal — along with massive spending cuts — to cap the debt ceiling.

In fact, one could argue that the single most effective action that Republicans could take right now would be to jack up tax revenues. Under this plan, the rich would pay substantially more into the U.S. Treasury.

How can a conservative Republican back such a plan? 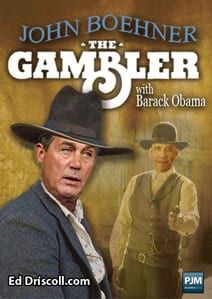 ause it works, but perhaps not the way the president might wish.

You see, the best way to boost tax revenues is to slash tax rates immediately, and in the long-term.

House Speaker John Boehner, R-OH, should tell Barack Obama: “Mr. President, you help us cut the tax rates, and we’ll man the wheelbarrows to tote the surplus tax receipts into the Treasury vault.”

If the president really wants to pay down our debt, and get rid of annual deficits, the fastest way to do that is to cut spending and increase revenue. And the best way to accomplish the latter is to unleash prosperity through reducing the tax rate paid by individuals and corporations. Of course, corporate taxes are also paid only by individuals (shareholders, customers, employees), since a corporation is a fictional entity composed of individuals that must recover increased expenditures through higher prices, lower dividends, or spending reductions, of which wages comprise the lion’s share.

As we boost tax revenues by slashing tax rates, confidence will grow among our global creditors (like China) as they see our commitment to fiscal restraint and our burgeoning ability to cash their mature T-bills. As our facility to repay debt increases, our cost of borrowing decreases.

Now, if President Obama should reject this offer to boost tax revenues, then either:

1) He’s ignorant of the historical impact of tax-rate reductions, or

2) He’s lying about what he really wants.

The former can be remedied by education, though only to a willing learner.

The latter can be cured only at the ballot box.

If what the president really wants is NOT increased revenue to pay down the debt, but punishment for those who have succeeded in our free-market system, then his goals stand at odds with the aspirations of the vast majority of the American people.

President Obama has recently indicated that a manufacturing and business revival is the recipe for emerging from the recession. Yet he then talks of penalizing businesses, as well as their customers, employees, and shareholders, by grabbing a greater percentage of their revenues and burdening them with further costly regulation.

President Obama appears committed to expansion through discouragement. Not only is he ignorant of basic economics, but his Vulcan aloofness has left him bereft of wisdom about human nature. His economic program echoes the break-room bulletin board parody poster: “The Beatings Will Continue Until Morale Improves.”

As he advances plans to eviscerate the goose that laid the golden egg, he berates that hapless farm fowl for consuming the grain from which eggs are made. He cuts her feed rations, as his insults grow increasingly bellicose.

But, Mr. President, you can’t kick the eggs out of the goose.

Speaker Boehner will never get a more propitious moment to declare the truth and beauty of our exceptional American recipe for prosperity. At the same time, he can call President Obama’s bluff. If it’s greater tax revenues we need to reduce our debt, then, Mr. President, there’s a proven method to acquire what you say you desire.

By yielding to the president’s stated goal, Republicans can put their principles into practice to produce prosperity once again.