Did Hitler and Porsche Steal the VW Beetle Design from a Jew?

Ganz was born in 1898 in Budapest to a German father and a Hungarian mother. He made his career in Germany, where he contributed and edited technical automotive publications, patented and licensed his inventions, and worked as a consultant to automobile and motorcycle companies. He contributed to BMW’s first in-house car design, the AM1, and he worked on Mercedes Benz’s landmark 170 model as well.

He was an outspoken and passionate advocate for the concept of a light, simple, inexpensive car that the average person could afford, starting in 1923. He called his concept the Volkswagen and used the name Maikäfer (May Beetle) for the prototypes he made for his client companies.

In 1933, Standard Fahrzeugfabrik introduced the Standard Superior Volkswagen at the Berlin auto show, based on Ganz’ designs. Mechanically, it has a platform chassis with a center tube, a rear transaxle with a horizontal engine, a swing axle suspension in the back, and independent suspension in the front. The body is a simple aerodynamic shape that looks very similar to that of the VW Beetle. 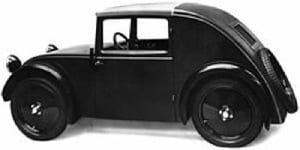 Hitler attended that same Berlin auto show in 1933. I have no idea if he stopped at the Standard Fahrzeugfabrik stand, but within a year Josef Ganz was arrested by the Gestapo and charged with blackmail for trying to protect his patent rights.

The dispute was with Tatra, a Czech company controlled by a Volksdeutsche family. Schilperoord says he’s discovered ties between Tatra and the Gestapo. Ganz, a Jew, fled to Switzerland where he again tried to get his Volkswagen built after the war. Eventually he immigrated to Australia, where he worked for Holden and continued to invent. He died in obscurity in 1967, though you can find patents of his online at the U.S. Patent Office.

In 1934, Dr. Ferdinand Porsche was commissioned by Hitler to develop the KdF-Wagen. Dr. Porsche came up with a lightweight car built on a platform chassis with a center tube, a rear transaxle with a horizontal engine, a swing axle suspension in the back, and independent suspension in the front. The body is a simple aerodynamic shape we recognize as the VW Beetle.

The rest, as they say, is history, a history that has been wiped clean of the role of Josef Ganz. Schilperoord is trying to rewrite that history — he’s a historical revisionist of the good kind.

The Standard Superior and Ferdinand Porsche’s design for the KdF-Wagen commissioned by Adolf Hitler were not identical designs, to be sure. Porsche was, after all, a brilliant engineer who had many original ideas. We do know, though, that he also wasn’t above “borrowing” ideas. Hans Ledwinka at Tatra favored air-cooled engines mounted in the back and Dr. Porsche corresponded and talked with Ledwinka. After 25 years of litigation, in 1961 the postwar Volkswagen company paid 3 million deutschmarks to Tatra to settle patent claims. Unlike the KdF-Wagen, Ganz’ Volkswagen was a mid-engine design, with the engine mounted in front of the rear axle. High-performance sports cars and race cars use the mid-engine layout so Ganz’ Volkswagen may have handled better than Porsche’s. Rear engine cars can have tricky handling. In the front, Porsche used his own patented torsion bar suspension, used in the Beetle for generations. Ganz used his own independent transverse leaf axle design, not entirely dissimilar to the design used on current Corvettes, including the ZR1. So Ganz’ Volkswagen and Porsche’s Type 1 VW are not identical, but there are strong similarities.

It’s possible that Porsche came to the same conclusions independently of Ganz. Porsche, Ledwinka, and Ganz all were working on small car projects in the early 1930s and it’s possible that they all looked over each other’s shoulders. There are four different designers who claim to have had a hand in the Lamborghini Miura. It seems, though, that Ganz was the first to lay out the general concept of the people’s car. Porsche’s advocates point to his prototype of the Zundapp Type 12 as the first proto-Beetle. The problem with that is that the Type 12 was just a scaled down version of another Zundapp car, the Wanderer. Besides, by the time Porsche developed the Type 12, Ganz had already made Maikäfer prototypes for the Ardie and Adler motorcycle companies and had published his small car concepts in the Motor-Kritik magazine, which he edited. Porsche next developed the NSU Type 32, which is stylistically closer to the Beetle than the Type 12, but that was still only in prototype form when the Standard Superior was already in production and on sale. It’s true that only a few hundred Standard Superiors were made, with one complete car surviving. However, the fact remains that Ganz’ Volkswagen was produced and on sale in 1933 a year before Porsche got his design brief from Hitler for the KdF-Wagen and three years before KdF-Wagen prototypes were made public by Porsche and the Reich in 1936.

The story of Ganz has started to circulate almost entirely due to Paul Schilperoord’s diligence, with websites and Wiki pages devoted to Josef Ganz and his contributions. I asked Schilperoord what his personal motivation was:

I have been interested in the VW Beetle for many years, since I was a child. I have read several books about the Beetle, which all told the same story about Porsche and Hitler. I was fascinated when five years ago I read in an old issue of Automobile Quarterly that there was a Jewish engineer, Josef Ganz, who could have been the real father of the VW Beetle. I started researching this out of interest and fascination that there could be a Jew behind the most successful Nazi project of all time. As I found more and more details I became more involved, also meeting some family members and an elderly gentleman who had lived in the apartment of Josef Ganz as a child and teenager, since he was the nephew of the girlfriend of Josef Ganz. When I had found many hundreds and hundreds of unknown documents and photographs, it became very clear that this was a very exciting story and that Josef Ganz deserved recognition for his important part in both Beetle history and innovating the automotive industry in the 1920s and 30s.

Schilperoord’s years of research has resulted in his book about Josef Ganz, Het Ware Verhaal van de Kever: hoe Hitler het ontwerp van een Joods genie confisqueerde (The True Story of the Beetle: How Hitler Confiscated the Design of a Jewish Genius). The True Story’s release will be celebrated later this month at a special event coinciding with the Nationaal Oldtimer Festival on the grounds of the legendary Zandvoort racetrack in the Netherlands. Ganz’ 1931 Maikäfer (May Beetle) prototype for Adler will be on display, and Schilperoord will drive it on the track. A complete but unrestored chassis of the 1933 Standard Superior will be on display as well as an unrestored “Swiss Volkswagen,” designed by Ganz and built by Rapid in 1946. English and German editions of the book are in the works, as is a documentary film.