Well into the new millennium, radical Islamist propaganda has found a popular platform for terror groups to disseminate their messages with relative ease, while reaching out to a wider audience than they ever could before.

This has been accomplished through access to the Web, initially by establishing networks and platforms designed for purposes that range from propaganda and news to recruiting new operatives, planning, and exchange of ideas, whilst limiting access by password restriction.

In the wake of flourishing jihadi use of the Internet, considerable effort has been invested by security agencies around the world to thwart this trend, only to yield a counter-productive result by prompting the mushrooming of multiple new outlets for every forum blocked.

In recent years, this issue has developed and evolved at a far greater rate, owing to social media platforms that enable any hardline Islamist or extremist to become a virtual activist, irrespective of hierarchy or organization. Nonetheless, jihadists who have realized the great potential of social media as a prominent and rapid means of spreading propaganda for a multitude of sympathizers, supporters, and would-be jihadists are now utilizing these platforms to reach out and target a new audience.

To this end, this article presents an examination of expanded jihadi activism on Twitter, and highlights the tardy U.S. efforts to counter this trend, specifically with regards to addressing Muslims in the West.

Between late 2012 and early 2013, notable jihadi discussions were observed on al-Qaeda (AQ) affiliated password-protected forums regarding the importance of the online media battlefield and the emphasis on the risks inherent in its use.

Additionally, a general abatement in the participation of activists on these forums was discerned, prompting top AQ ideologue Abu Saad al-Amili to pen an essay lamenting the decline and calling upon the “soldiers of the jihadi media” to return to their (virtual) arenas. 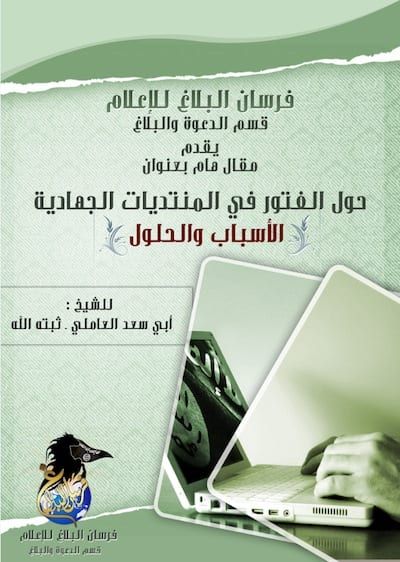 One of Amili’s social media columns

In the essay, titled “Appeal to the Media Soldiers of Jihad: Maintain your Positions and Return to your Enclaves,” al-Amili attributed the shrinking activity on jihadi forums to the migration of members into such social media networks as Facebook and Twitter. 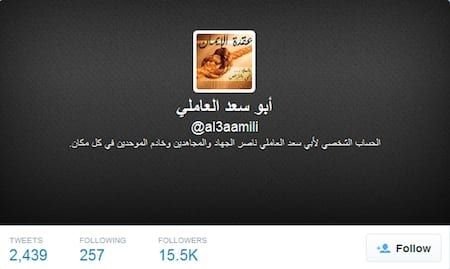 Although himself a Twitter activist (@al3aamili), in his article al-Amili attempts to motivate members to remain active on the forums. Yet, the fact that he, together with top AQ brass, has become a prominent Twitter user appears to have encouraged forum members to “migrate” to Twitter en masse instead of “maintaining their position” elsewhere.

Twitter as an Instant Relay for Booming Jihadi Activities

Serious jihadi activism on Twitter floundered for some time before eventually taking off and developing into a full-fledged propaganda arena, massively utilized by senior jihadists, actual fighters on the battlefield, and media jihadists alike.

This trend has also swept the once-wary jihadi platforms that until recently complained about losing members to the open Internet sphere. Nowadays, the majority of jihadi forums and platforms have official and unofficial Twitter accounts, most of which advertise these accounts on their main page.

The intensification of the armed conflict in Syria, where jihadists and AQ-splinter groups have flooded in from around the globe to successfully establish strongholds in various parts of the country, precipitated an expansion of war efforts to social media.

It is in this conflict that Twitter has become the ultimate intersection for jihadi propaganda and activism, where actual fighters and their followers publish first-hand statements and accounts in addition to uploading raw footage from the battlefront. Foreign jihadists who “migrated” from Western countries to Syria greatly contributed to the rise of this phenomenon, as they regularly update their friends, family, and followers on their well-being, as well as on their “holy war adventures.”

Moreover, Twitter became a major medium for recruiting would-be jihadists from Muslim populations residing in the West, often via media campaigns conducted in a number of languages such as English, French, and German.

In recent months, Twitter activism by AQ-inspired operatives in Syria, particularly foreigners from the Islamic State of Iraq and Sham (ISIS), have multiplied exponentially to the point that individual jihadists have grown even more famous and followed than their respective group. Abu Abd al-Rahman al-Kuwaiti (@sm65sm46), an ISIS regional commander in northern Syria, is one of the most active on the battlefield as well as on Twitter. So is Qarin al-Kalash (@K_L7), a prominent Twitter jihadist who has one of the highest numbers of followers among the activists and groups highlighted in this report. Al-Kalash, a Saudi foreign fighter in Syria, boasted a striking 65,000 followers before suspending the account and referring his followers to another account (@OT_48) where he revealed his real name, Abd al-Majid al-‘Utaibi. His posts, as well as recent information released by opponents of ISIS, indicated that al-Kalash is a senior member of the media committee set up by ISIS leader Abu Bakr al-Baghdadi. 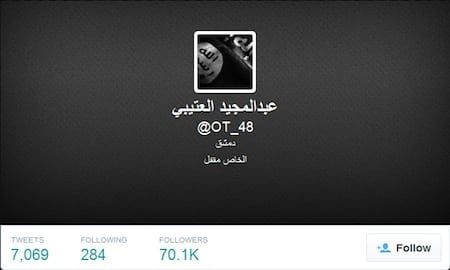 Competitions to attract Western-based would-be jihadists have also reached Twitter, mainly by appealing to Muslim communities in the West through the release of multilingual posters and documentaries depicting the lives of “Mujahideen” in Syria. For instance, AQ official branch in Syria al-Nusra Front (JN) and ISIS rely on religious incitement against minorities, be they Shi’a, Alawi, Christians, Kurds, Druze, etc., to motivate hardline Islamists to join the battle against “the infidels.” An additional tactic shared by most terror groups is the release of videos featuring “suicide jihadists” preparing for their operations, and before departing to “paradise” for Allah’s greater cause.

It should be noted that the media branches of militant jihadi groups are now virtually (via Twitter) joining battles from the moment they begin, providing immediate updates and minute-by-minute coverage of events — whether photos or communiques — all in real time. This was best demonstrated during the Westgate Mall siege in the Kenyan capital of Nairobi, when terrorists from the Somali Harakat al-Shabab al-Mujahideen (HSM) stormed the upscale venue and massacred nearly 70 shoppers on September 21. 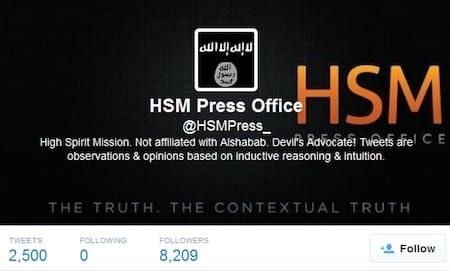 During the attack, the HSM press office posted continuous updates, accompanied by threats of additional assaults to follow in the near future. The original HSM account was blocked by the company. However, multiple other accounts were opened by the group.

On December 5, 2013, a controversial Twitter account sporting the name @wikibaghdady was opened and has been creating waves within the jihadi world ever since. The account now has some 25,053 followers and almost 669 tweets. It mimics WikiLeaks, and as suggested by its name, it is dedicated to exposing the structure of ISIS and the mindset of its feared leader Abu Bakr al-Baghdadi. 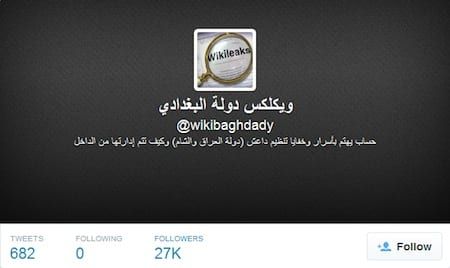 Thus far, the author has published a series of 16 chapters, which provide a rare insight into the world of the most powerful fighting force in Syria and the Middle East, revealing many of its dark secrets in addition to its modus operandi, origin, and the power struggle with JN. While the leaks are difficult to authenticate, they are believed to derive from an informed former ISIS leader who recently defected due to the outbreak of all-out war within the Islamist anti-Syrian regime camp. The author begins by posting a number of rhetorical questions to illicit the reader’s curiosity, particularly by repeating “Wait for us soon.”

However, important insights emerge from the tweets with regard to one specific affair that suggest the author’s information is genuine. For instance, the leaks named a former Iraqi officer, Hajji Bakr, to whom it attributed most of the group’s strategies and the actual formation of JN. Also, the leaks revealed the identity of ISIS leader Abu Bakr al-Baghdadi to be Ibrahim ‘Awwad Bu Badri Bin Armoush. 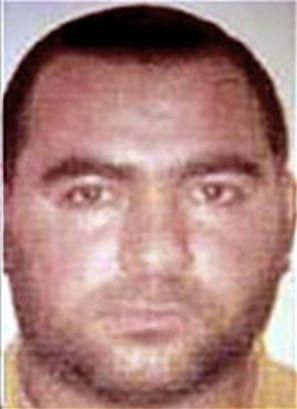 On December 17, the author wrote that when the Syrian revolution broke out, al-Baghdadi and Hajji Bakr feared losing members of the Islamic State of Iraq (ISI) to the Syrian battlefront, which would “cause a weakening and fracturing in the [Islamic] State.” For this reason, “Colonel Hajji Bakr suggested the formation of a group of non-Iraqis that would go to Syria under the command of a Syrian, in order to block any Iraqi commander in ISI from leaving the Iraqi arena.” JN was thus born and started to grow exponentially under Abu Muhammad al-Joulani, attracting foreign jihadists from North Africa (the Maghreb), North Caucasus, Jordan, the GCC, Yemen and Europe.

The discord between ISI and JN began when al-Joulani refused to accept the expeditious unification with ISI, announced by Baghdadi, which according to the leaks was born of concern by the latter of the growth of JN.

To conclude, the leaks have certainly wreaked havoc on the Islamist scene, its supporters and sympathizers, and deepened the rift between the multiple radical groups currently engaged in a bitter rivalry match against each other. Nonetheless, the leaks have become an unprecedented source for valuable intelligence information that was difficult to acquire and retrieve without the rivalry and defections within the jihadi factions.

On July 9, 2005, Ayman al-Zawahiri, then-deputy of Osama Bin Laden, sent a letter to Abu Mussab al-Zarqawi stressing, amongst other things, the importance of the media in modern warfare. Al-Zawahiri wrote that AQ and its enemies are engaged “in a race for the hearts and minds of our Ummah,” and that more than half the war is taking place “on the media battlefield.” Bin Laden made a similar famous remark in a 2002 letter to Taliban leader Mullah Muhammad Omar: “It is obvious that the media war is one of the strongest tactics this century; in fact, it may amount to 90% of the total preparation for battle.”

Following the booming trend of jihadi activism and propaganda on Twitter, the Center for Strategic Counterterrorism Communications (CSCC), based in the U.S. State Department, launched a Twitter account called Think Again Turn Away, @ThinkAgain_DOS on December 3, 2013. The goal of this account is to expose militant activities around the world that jihadists claim are directed against their enemies and rivals when in fact most of them target innocent civilians, based on their religious confessions. 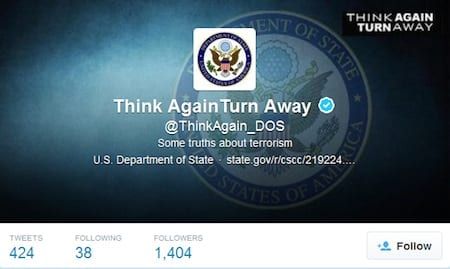 All tweets on the account are in English, suggesting it is aimed at Muslims living in Western countries who sympathize with AQ ideology. This is likely due to the fact that various militant groups in Syria, Iraq, Somalia, Yemen, Afghanistan, Pakistan, Nigeria, and the Maghreb have embarked on sophisticated, multi-language propaganda campaigns over social media platforms, specifically designed to attract would-be jihadists in the West.

Currently, @ThinkAgain_DOS has garnered 1404 followers and tweeted 424 messages. Basically, it relies on short messages accompanied by attached links that refer readers to news reports, articles and audio-visuals that counter AQ ideology and claims. For example:

Social media networks, particularly Twitter, have without a doubt become an integral tool in the jihadist war efforts and modus operandi, after realizing the importance of the media as a complementary battlefront.

What enables jihadi propagandists to gain traction on Twitter is the fact that a growing number of activists — many of whom are indistinguishable from random users of this social media — repost messages originally published by militant jihadi groups, AQ forums and ideologues. This complicates the process of differentiating between actual jihadists and mere AQ sympathizers. That said, the fluid nature of the platform means that onlookers witness not only activism, but rifts among jihadi groups as they happen in real time.

The death of Osama bin Laden not only decentralized AQ jihadi activities and those of its many factions around the world, but also boosted individual and aggressive utilization of the social media for propaganda purposes, expanding the group’s outreach to a multilingual audience, and eliminating traditional security and social barriers. Moreover, today’s modern “media jihad” has become an ulterior fulfillment of the online call issued by the AQ media arm al-Fajr following bin Laden’s death to take the fight to a higher level on all online channels:

The Internet is a battlefield for jihad, a place for missionary work, a field for confronting the enemies of God. It is incumbent upon every individual to consider himself a media Mujahid, dedicating himself, his wealth and his time to Allah.