In recent weeks, the price of oil has climbed above $90 per barrel. As chaos spreads through the Arab world, we could soon see much worse. With these facts in mind, it is essential that U.S. policymakers act to protect the U.S. economy from this ever-worsening trend.

The likely impact of a new oil price rise is shown in the graph below, which compares oil prices (adjusted for inflation to 2010 dollars) to the U.S. unemployment rate from 1970 to the present. It can be seen that every oil price hike for the past four decades, including those in 1973, 1979, 1991, 2001, and 2008, was followed shortly afterwards by a dramatic rise in American unemployment. 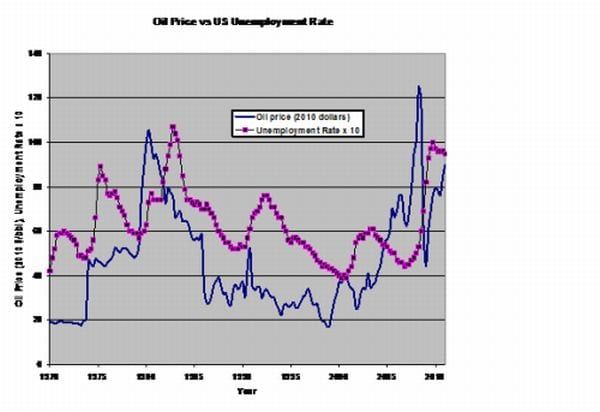 The distress to American workers caused by such events is manifest, but the economic harm goes far beyond the impact on the unemployed themselves. A sustained oil price of $90 per barrel will add $480 billion to the U.S. balance of trade deficit. Furthermore, there is a direct and well-established relationship between unemployment rates and rates of mortgage defaults.

Thus the $130 per barrel oil shock of 2008 didn’t just throw 5 million Americans out of work, it made many of them default on their home payments, and thus destroyed the value of the mortgage-backed securities held by America’s banks. This, in turn, threatened a general collapse of the financial system, with a bailout bill for $800 billion sent to the taxpayers as a result. But that is not all. The destruction of spending power of the unemployed and the draining of funds from everyone else to meet the direct and indirect costs of high oil prices reduced consumer demand for products of every type, thereby wrecking retail sales and the industries that depend upon them.

Indeed, the world today is already in deep recession. Yet as a result of the systematic constriction of oil production by the Saudi-led OPEC oil cartel, petroleum prices today stand at over four times what they were in 2003.  This has imposed a tax increase on our economy of $500 billion per year, equal in economic burden to a 20 percent hike in income taxes, except that instead of the cash going to Uncle Sam, it will go to Uncle Saud and his lesser brethren.

These, however, are said to be our “friends.” As current events in Egypt should make clear, however, there is every chance that someday — perhaps soon — we could wake up and find that the world’s oil is under new management, even less concerned with our well-being than the gang in charge today.

This is a fundamental threat to America and the world economy. We need to take action to protect ourselves from it now, before it is too late.  How can we do this?

Looking at the data in the graph, it is clear that cap and trade plans, or alternative methods of carbon or fuel taxation, are not the answer. Indeed, by increasing the cost of energy even beyond those imposed by OPEC, they will only make the economic situation worse.

Instead, we need a policy that will keep oil prices down. The way to do this is to create a degree of diversity and competition in the global fuel market that does not exist today.

Fortunately, the technology to accomplish this is currently available. Flex fuel vehicles can be now be made, at an incremental cost of only about $100 per car, that can run equally well on gasoline, ethanol, or methanol, in any combination, thereby giving the consumer complete fuel choice.

Ethanol has already replaced seven percent of our gasoline, and having a flex fuel auto fleet would allow it to do more. But the real key here is the ability to use methanol, which can be made in nearly unlimited quantities from natural gas, coal, biomass, or recycled urban trash — resources in plentiful supply both here and worldwide. Methanol can be produced for as little as $0.50 per gallon, and its current global spot is $1.28 per gallon, without any subsidy, equivalent in energy terms to gasoline at $2.33 per gallon.

Were Congress to pass a law requiring that all new cars sold in the USA be fully flex fueled, it would change not merely the American auto fleet, but the global auto fleet, as foreign car makers would be compelled to switch their lines over to meet the standard. Gasoline would then be forced to compete at the pump against both ethanol and methanol made from any number of possible sources, all over the world, thereby putting a permanent competitive constraint on the price of petroleum at about the $50 per barrel level. This would protect us from both the greed of our “friends” and the malice of our enemies.

In the last Congress a bipartisan bill, known as the Open Fuel Standards Act, was introduced into both the House and the Senate that incorporated such a provision. As a critical national and economic security measure, it needs to be introduced again, and this time brought to a vote and passed.

The time to fix the roof is when it is not raining. It’s already drizzling. But we can see the storm clouds, and time could be running out.

- Dr. Robert Zubrin is president of Pioneer Energy,  a senior fellow with the Center for Security Policy, and the author of Energy Victory. The paperback edition of his latest book, "
Read more by Robert Zubrin
SHOW COMMENTS