5 New Muslim Calls for Genocide of the Jews

Israeli Prime Minister Binyamin Netanyahu spoke some seldom-heard truths when he said Tuesday: “What we’re seeing here with Hamas is another instance of Islamist extremism, violent extremism that has no resolvable grievance. Hamas is like ISIS, Hamas is like al Qaeda, Hamas is like Hezbollah, Hamas is like Boko Haram.” Indeed so; and Hamas shares those groups’ implacable hatred not just of Israel, but of all Jews – based on the Qur’an’s dictum that “you will surely find the most intense of the people in animosity toward the believers to be the Jews” (5:82).

In practice, this generally manifests itself as just the opposite: in Muslims being the most intense of the people in animosity toward the Jews. That was clear last week in new calls for mass murder and genocide of Jews from supporters of Hamas and the Palestinian jihad – again making it difficult for supporters of the Palestinians to claim the moral high ground.

5. Qatari imam prays about the Jews: “Count them one by one, and kill them to the very last one.”

Sheikh Tareq Al-Hawwas delivered a Friday sermon on Qatar TV on July 18, the day after the Israelis began their ground incursion into Gaza. “For the first time in the history of the abhorred country, the state of Israel,” the pious sheikh exulted, “sirens are heard around the clock and over three million people flee to their hideouts. Schools, governmental departments, and airports came to a halt. When have we ever heard of such things? This is the beginning of good things to come.” He concluded his peroration with an appeal to the deity:

Oh, Allah increase the pressure You exert upon the plundering Jews. Demonstrate upon them the miracles of Your might, for they are no match to You. Count them one by one, and kill them to the very last one. Do not spare a single one of them. Oh Allah, disperse them. Oh Lord, freeze the blood in their veins. Oh Allah, tear them asunder. Oh Allah, sow discord in their hearts. Oh Allah, do not let them prevail. Make an example of them for their allies. Oh Allah, bring down the planes of their air force, burn their infantry and sink the ships of their navy.

4. Berlin imam: “Oh Allah, destroy the Zionist Jews…. Count them and kill them to the very last one.”

That same day, Sheikh Abu Bilal Ismail, preaching at the Al-Nour Mosque in Berlin, echoed Tareq Al-Hawwas’s prayer. Why Allah is exhorted to count the Jews before he kills them all is unclear – perhaps to make sure than none escape death. In any case, both imams asked for this, as Sheikh Abu Bilal Ismail prayed:

Oh Allah, destroy the Zionist Jews. They are no challenge for you. Count them and kill them to the very last one. Don’t spare a single one of them. Shake the ground beneath their feet. Make them suffer terribly. Deflect their bullets. Disperse them. They behave tyrannically all over the world and spread corruption. Oh Lord, bring torment upon them. 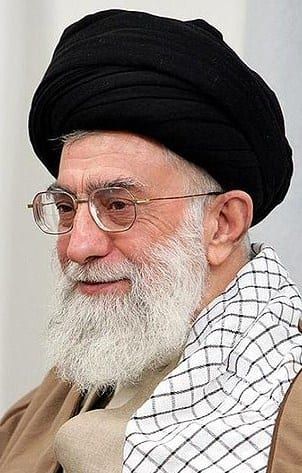 3. Iran’s Supreme Leader: The “only solution” is Israel’s “destruction”

On Wednesday, Iran’s supreme leader, the Ayatollah Ali Khamenei, decried the alleged Israeli war crimes in Gaza and thundered: “These crimes which are beyond imagination and show the true nature of the wolfish and child killer regime, which the only solution is its destruction.”

Knowing, however, that Israel’s destruction is not imminent, he added: “However, until that time, the expansion of the armed resistance of the Palestinians of the West Bank is the only way to confront this wild regime.” He emphasized, however, that Israel’s total destruction, which would inevitably result in the mass murder of millions of Israelis, was still the goal:

As said by Imam Khomeini, Israel must be destroyed.… However, until that time with the help of Allah for this cruel and murderous regime to be destroyed, strong confrontation with steadfast armed resistance is the only solution against this destructive regime.

Last Sunday, Muslim “youths” looted Jewish-owned businesses and attacked synagogues while chanting “Death to the Jews” – not, mind you, “Death to Israel,” which would also have been inexcusable, but “Death to the Jews,” which made their fundamentally antisemitic and genocidal intentions clear.

Roger Cukierman, a Jewish leader in France, observed: “What’s happened in the past few days is terrible. They’re shouting ‘Death to the Jews’ and attacking synagogues. It’s completely out of control.” French Prime Minister Manuel Valls agreed, saying: “What’s happened in Sarcelles is intolerable: attacking a synagogue or a kosher grocery, is quite simply antisemitism, racism.”

It is that, and more as well. It is a revival of the sentiments that led to the ugliest and most violent outbreak of Jew-hatred in Germany in the middle of the twentieth century. And this recrudescence of the ancient hatred has been seen also in the country of its most notorious manifestation.

Dieter Graumann of the Central Council of Jews in Germany, declared:

We are currently experiencing in this country an explosion of evil and violent hatred of Jews, which shocks and dismays all of us. We would never in our lives have thought it possible anymore [that] those antisemitic views of the nastiest and most primitive kind can be chanted on German streets. Jews are once again openly threatened in Germany and sometimes attacked, synagogues are being defaced and declared as targets.

This revolting situation in both France and Germany has been enabled by massive and unrestricted Muslim immigration. It is ironic that this new and menacing anti-Jewish racism has been enabled by policies that can only be questioned by those who are willing to brave charges of “racism” themselves.

The genuine racism, and genuine genocidal intentions, are being directed with increasing openness not against Muslims, but by Muslims against Jews. Europe and the world community need to wake up to this before their now-forgotten post-World War II cries of “Never again!” become not a rallying cry, but a bitter and outrageous irony.

Robert Spencer is the director of Jihad Watch and a Shillman Fellow at the David Horowitz Freedom Center. He is author of 23 books including many bestsellers, such as The Politically Incorrect Guide to Islam (and the Crusades), The Truth About Muhammad and The History of Jihad. His latest book is The Critical Qur’an. Follow him on Twitter here. Like him on Facebook here.