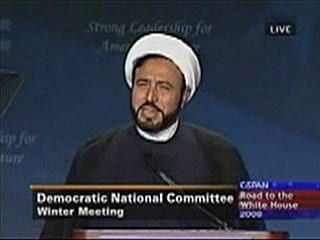 As the Muhammad movie riots continued into a second week, two imams based in the United States joined the calls from the grand imam of Al-Azhar, the grand mufti of Saudi Arabia, and the Muslim Brotherhood for the U.S. to criminalize criticism of Islam.

Sheikh Husham al-Husainy of the Karbalaa Islamic Education Center in Dearborn, Michigan, said about the worldwide Muslim riots that “the only solution is to replace the hate with love.” And “love,” in his mind, meant that “they should put a law not to insult a spiritual leader.”

Meanwhile, Imam Mohammad Qatanani of the Islamic Center of Passaic County, New Jersey, said that “we, as Americans, have to put limits and borders [on] freedom of speech,” for while Americans do indeed have the freedom of speech, they have “no right” to talk about topics holy to Muslims, for to do so will lead to “hatred or war among people.”

Al-Husainy and Qatanani are not marginal, fringe characters. Al-Husainy last year was the featured cleric on All-American Muslim, a reality showed that aired on The Learning Channel and was dedicated to countering the chimerical threat of “Islamophobia” by showing Muslims as ordinary folks leading ordinary lives. Yet, according to Walid Shoebat and Ben Barrack, he is also “a signatory to the Jerusalem Document of 2009, which reads more like Mein Kampf. It refers to the war on Zionism as a war between “good and evil.” Zionism is considered an “aggression” that is infecting “the entire human race.” Muslims are told to “get ready for the holy Jihad.” The document also expresses support for a jihad terrorist group: “We remind our sons to get ready to carry out their duty in Holy Jihad and continue the path which our young valiant men in Hezbollah began in Southern Lebanon.”

He was echoing the Fatiha, the first sura of the Qur’an and most common prayer of Islam. It asks Allah: “Show us the straight path, the path of those whom Thou hast favoured; not the (path) of those who earn Thine anger nor of those who go astray.” The traditional and mainstream Islamic understanding of this is that the “straight path” is Islam, while the path of those who have earned Allah’s anger are the Jews, and those who have gone astray are the Christians. Thus al-Husainy was condemning Judaism and Christianity right under the bowed heads of the assembled Democrats. And his reference to “occupation” was clearly, coming from this supporter of Hezbollah, a dig at Israel.

As for Qatanani, investigative journalist Daniel Greenfield reports that,

despite the fact that Mohammed Qatanani was a member of the Muslim Brotherhood, the organization that is behind both al-Qaeda and Hamas, despite his own guilty plea to being a member of Hamas, and despite the fact that even in the United States, he had defended a charity that provided funds to children of suicide bombers (this is done as an incentive to reassure terrorists that if they die their families will be taken care of), Qatanani was not deported.

Yet New Jersey Governor Chris Christie recently had Qatanani at the governor’s mansion for his Ramadan Iftar dinner. Christie was glad to see him, calling him his “friend” and telling him before the audience: “I’m glad to have you here.” Of Qatanani, he said: “In all my interactions with the imam, he has attempted to be a force for good in his community, in our state with law enforcement, with those of us who have gotten to know him for the years.” Will Christie now explain to his friend about the importance of the freedom of speech?

The striking thing about the statements from al-Husainy and Qatanani is not that they called for restriction of the freedom of speech. After all, they are mainstream Muslims, and Islamic law, both Sunni (Qatanani) and Shi’ite (al-Husainy), denies the freedom of speech and forbids criticism of Allah or Muhammad on pain of death. What is striking is that despite their obvious attachment to Sharia in its traditional and mainstream form, as well as their support for the jihad terror groups Hamas (Qatanani) and Hezbollah (al-Husainy), both clerics continue to enjoy a reputation as “moderates.” Qatanani has the fervent allegiance of a state governor and prominent player in national politics, and al-Husainy is featured at gatherings of a major party and on national television.

It is certain that if al-Husainy and Qatanani were evangelical Christian pastors who had expressed support for the Ku Klux Klan and called for repeal of the First Amendment, Chris Christie, the Democratic National Committee, and The Learning Channel would be nowhere near them, except to issue condemnations wherever necessary. But when it comes to Muslims, the rules are different: so avid are politicians and the mainstream media to find “moderates” and feature them, thereby proving that they are not “Islamophobic,” that they uncritically embrace any Muslim leader who smiles and talks of peace.

What’s even worse is that when these “moderates” are exposed as not quite so moderate as all that, no one cares. No supporter of al-Husainy or Qatanani is going to rebuke either one for their opposition to the First Amendment – not even Chris Christie. More’s the pity.

Robert Spencer is the director of Jihad Watch and a Shillman Fellow at the David Horowitz Freedom Center. He is author of 26 books including many bestsellers, such as The Politically Incorrect Guide to Islam (and the Crusades), The Truth About Muhammad and The History of Jihad. His latest books are The Critical Qur’an and The Sumter Gambit. Follow him on Twitter here. Like him on Facebook here. For media inquiries, contact [email protected]
Read more by Robert Spencer