The (Overwhelmingly White!) Stewart-Colbert Rally, From the Cheap Seats

Throughout Saturday, life on the National Mall was breezy, playful, wistful, and clever. And I’m not talking about anything that happened on stage with Jon Stewart or Stephen Colbert.

I observed from 4th, 6th, and 7th Streets, on the steps near the West wing of the National Gallery of Art, and in front of the National Air and Space Museum. I did not get to watch from 3rd Street, where about a quarter of the crowd sat. They could see the stage and interact with the skits, and probably enjoyed the show. But from the cheap seats, it was part frat party, part state fair picnic, and part Halloween parade. The only sense you got that it was a rally were the signs.

You likely didn’t see them on the MSM coverage, but more than a few spewed hate towards Glen Beck, Sarah Palin, conservatives, and the Tea Party: 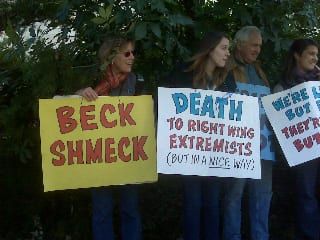 — Death to Right Wing Extremists (But in a Nice Way)

— TeaTards (with pictures of Sarah Palin)

I did actually enjoy some of the others. From the Jesse Jackson “I am somebody” category:

— I Have an Opinion

And from the Harold and Kumar category:

— Gay Muslims will Blow You

— Obama is Not a Gay Alien

— Rub One Out for Sanity

And my favorite, just because:

Overall, it was a cultural happening, not a political event. Yet this was not Woodstock or the Super Bowl. There was no beer. And there was a palpable disconnect between the audience and stage — seeing the show later on TV was an entirely different experience, as about three-quarters of the crowd could not hear or see much. Most of these folks were not disappointed, though. Being there was enough for them.

Despite a personal warning to me from Comedy Central Vice President Steve Albani that he was suspending the First Amendment and would “strictly prohibit filming” on the public mall, we were able to slowly move through the crowd without encountering the Reno 911! cops. I was there with PJTV’s Alfonzo Rachel, who recorded a number of outrageously funny reports, including a backstage report from the motor pool area which was brimming with stretch limos and black SUVs. (Global warming activists, please watch!)

A ton of people showed up, though Beck easily won the turnout contest, as Charlie Martin has calculated. Most were folks in their 20s (and white! Racists!) but there was a smattering of baby boomers and even a few elderly. The mood was festive and friendly, and the cool autumn breezes and blue skies were wonderful.

The group really wanted to be inspired. Instead, they got lots of made-for-TV skits that failed to ignite the crowd. The rally was probably good TV, although the tempo was slow and uneven at times. But it was terrible rally material. Daily Show skits, if they are funny, can engage audiences in a small studio in Manhattan or via television close-ups. But these do not work in the open air, even with Jumbotrons. The subtlety of facial expressions, the monologues, and the on-stage antics dissipated.

When Jon Stewart walked on stage, there was pandemonium. Then everyone fell silent, intent on listening. But no one could hear or see much. Complete strangers would often ask each other: “What did he say?” The answer was usually a shrug. There was local laughter when an audience member would crack a joke.

However, people didn’t mind. They were there, and that seemed to be enough. There is a lot of good to say about the experience of being crammed in a crowd of good-natured people.

The music served as relief and entertainment, yet no one around us even knew that Yusuf Islam was on stage. The Yusuf-Ozzy Osbourne face-off went over everyone’s heads.

From the cheap seats perspective, the rally-as-a-rally was a flop. But as a fun thing to do on a beautiful day, it was a winner.