Incredible Pluto Flyby the End to an Era of Exploration 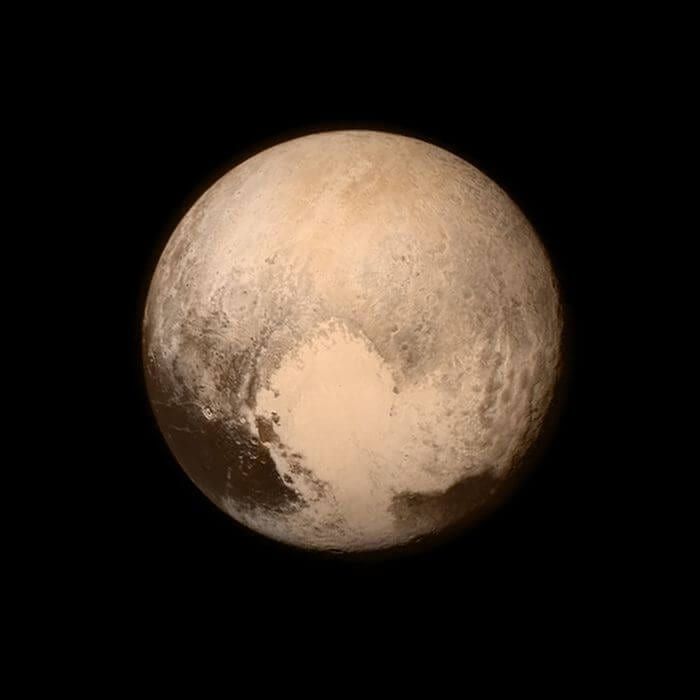 Today is exactly half a century after Mariner IV flew past Mars and humans first closely viewed another planet, starting our initial reconnaissance of the solar system.

Until this week, Pluto has been nothing but a point of light in the night sky, visible only with a big telescope. Today, as the New Horizons probe zoomed past and shot some pictures of it, many have said that it will be the last time in history that we will have viewed a planet in the solar system up close for the first time.

This, of course, is using the traditional definition of the nine planets, of which Pluto was one until it was unceremoniously but officially demoted to a “dwarf planet” a few years ago, to the dismay of many scientists, and schoolchildren of all ages. Technically, it’s a Kuiper Belt Object (KBO), of which astronomers now believe there are hundreds of thousands. But the existence of the Kuiper Belt, far out in the solar system beyond Neptune, the most distant (current) official planet, hadn’t even been postulated, let alone verified at the time a young Clyde Tombaugh discovered Pluto, its first known member, in the 1930s.

Because it has a slight atmosphere, the body’s size hasn’t been known precisely until now, but one of the first things we’ve learned this week from the spacecraft is that it’s the largest known one, edging out its KBO “twin” Eris, which had previously been thought to be the ninth-largest body in the solar system. Both are less than one fifth the diameter of our own planet, and smaller than our own moon.

In May, it was determined that Pluto has a total of five moons: Charon, its major moon, and the much smaller Styx, Nix, Kerberos and Hydra. The other thing we’ve learned as the probe has approached is that Charon is much larger than expected, making Pluto almost a dual planet system, both engaged in a wobbly dance around each other, and making the orbits of the other moons chaotic and unpredictable.

There are indications of outgassing of the atmosphere as well, with nitrogen escaping from the equator. Charon seems to have a dark red pole, and the initial speculation is that it is due to trapping of the leaking gas. The early data also indicate that Pluto itself has a polar  ice cap of frozen methane and nitrogen. The fact that it’s larger than expected for its mass means that it is of lower density than previously speculated, indicating perhaps that it has a higher content of ice than originally thought. Eris is in fact quite a bit more dense, indicating that it is probably rockier than Pluto.

The planet is currently over thirty times as far from the sun as earth, and getting farther away (one of the reasons that Dr. Alan Stern, the acknowledged father of the mission, pushed to make it happen over the past couple of decades). It’s been a long nine-year journey, and it required a “sling shot” maneuver around Jupiter, stealing an unmeasurable amount of that gas giant’s momentum, to get there at all.

But as it approached the distant bodies, things started to happen very rapidly. In a press conference yesterday, Stern characterized it as walking on an interminably long escalator, then stepping aboard a supersonic transport. It will be passing through the Plutonium system at a relative velocity of 14 km/s, which (as the invaluable XKCD points out) would make a real mess if it hit your car at that speed. This morning, it made its closest approach to the system, taking pictures  as it did so, and more in the “rear-view mirror” as it sped away through the belt.

Because it won’t orbit, it won’t be able to see the whole dwarf planet, only capturing about sixty percent or so of the surface, so some of Pluto will remain a mystery unless and until we send another probe.

It’s several light-hours away from earth, so the initial data won’t arrive until later today.  The data won’t even start its journey back to earth until the spacecraft has departed the system because, while it can point at Pluto to take pictures, or point at earth to transmit the data, it can’t do both at once. Also, because of the distance from the sun, the only way to power the system was with a nuclear “battery,” and its transmitter has only a few watts of power. So even with the giant dishes of the Deep Space Network at Goldstone in California, and other locations, the data rate will be very slow, and we won’t have all of it for months to come.

What comes next? Well, Eris is almost as large as Pluto and (as noted) different, so it might be an interesting place to visit. Also, because we didn’t see the entire surface, a follow-up visit to Pluto would be necessary to fully map and characterize it. It is headed farther from the sun, and further out of the plane of the ecliptic in which the major planets lie, so it will be getting more difficult to do so with time. But that also means that it will be in a different environment, and it would be of great interest to see what effect the increased distance has on it, in terms of outgassing and composition. With current propulsion technology, the best way to get there remains a gravity assist from Jupiter, an opportunity that occurs once every dozen years or so. The window for one is in fact open right now for a year or so, but that isn’t sufficient time to plan and launch another mission, even if funding were available. The next one will occur in the late 2020s.

But despite the moribund plans of  Congress, with its insistence on wasting money on large, unneeded rockets instead of technology development, even space technology doesn’t stand still. Launch costs are going to continue to drop into the future, and if we get serious about space and sending probes and people out into the solar system, we will be utilizing the resources of the moon and asteroids to further drop the costs of excursions.

Companies like Deep Space Industries, Planetary Resources and Shackleton Energy plan to mine those bodies for propellants in the next decade. If they succeed, cheap propellant commercially available in the earth-moon system will allow us to launch a large enough mission to not just fly by the distant orb, but to orbit it, perhaps even without having to visit and slow down Jupiter.

Regardless, it’s almost certain that we will continue to explore the depths and outer reaches of our solar system (and perhaps, as technology evolves, even other star systems). As Stern said on Monday, “People love turning little dots, little points of light, into planets, and writing new textbooks from scratch.”