The Bioethics of Mars One 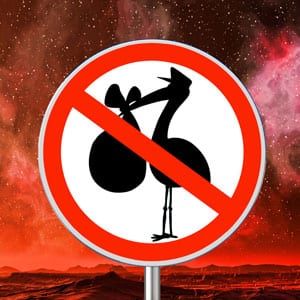 Bas Lansdorp is the Dutch engineer who proposes to send mixed-sex crews on one-way missions to the Red Planet starting in 2022. Lansdorp is funding the adventure as a reality television project, and he gave a talk on the subject at the Space Tech Expo in Long Beach, California last week.

It’s an interesting project, and inspiring to many. In fact, almost 80,000 people have reportedly paid a $75 fee and signed up for a chance to go. Three of them, including veteran SF author David Brin and an eighteen-year-old woman, explain why:

“I can say I have an ulterior motive,” said [Brin], who has written more than a dozen science-fiction novels — including “The Postman,” which was turned into a Kevin Costner movie in 1997. “I’d get a lot of writing done, and it might be memorable.”

“Being young doesn’t make me want to do it any less because I have my whole life ahead of me,” she said. “It makes it more exciting. … I love all my friends, my guy friends, my family. It’s not that I’m trying to get away. It’s like I’m trying to strive for something more.”

She has long dreamed of going into outer space, and she figures that her future degree in materials science would come in handy for creating the first interplanetary settlement. “Going to Mars, there are so many opportunities for that,” she said.

But there’s a fly in the ointment, at least for her. Brin has already raised a family, but if part of the whole life she has ahead of her includes having children, that may be one opportunity she won’t have if she does this. And based on what we know right now about the planet Mars, it would be irresponsible to even attempt it, and not just because (as Bernie Taupin’s lyrics from four decades ago have it) it’s “cold as hell,” or because there are extremely toxic substances in the regolith of Mars.

I pointed the critical issue out to Lansdorp in a question following his presentation:

We have a few thousand hours of experience in living in weightlessness, a few tens of hours at 1/6th of a gravity on the moon, trillions of hours of experience in one gravity, but absolutely none at the 0.38 gravity of Mars. And we have no experience whatsoever of creating offspring in any gravity environment other than our own. We have absolutely no data on whether or not a mammal, let alone a primate, let alone a human, can conceive and gestate in gravity fields other than earth’s. And even if it is possible to do so, we don’t know what the implications would be for the children issued, in terms of birth deformities and resulting health problems. Are you planning to send fertile couples on this mission, with such a risk?

Over at Space.com, Rod Pyle reported on his response, which to me didn’t seem that well thought out:

Having kids on Mars would be irresponsible at this point, said Bas Lansdorp, co-founder and CEO of the Netherlands-based nonprofit Mars One, which aims to land four astronauts on the Red Planet in 2023.

“We are not in the business of telling people what to do, but astronauts are very responsible people,” Lansdorp said… “When they realize they are living in a dangerous place, they will know what to do, that it’s not right.

Well, we’re agreed that it would be irresponsible, but first of all, sometimes even responsible, well-screened people do irresponsible things, particularly when thrown into unfamiliar environments, and what environment would be more unfamiliar than another planet? And beyond that, even if there was no intent to have children, accidents can always happen if left to chance. Laura Woodmansee, who has literally written the book on sex in space, thinks that it would be unethical to allow conception in weightlessness, let alone on an alien planet:

Couples going on space vacations are bound to want to have a good time. Maybe space tourism companies ought to consider banning conception in orbit. I realize this may seem extreme. But consider the fact that doctors prescribe medications with warnings about pregnancy. Maybe spaceflight ought to come with a warning label: ‘Don’t get pregnant in space.’ Sex in space education anyone?

The issue goes beyond gravity, or simply a hazardous environment in which to raise children — pioneers have, after all, been raising children in hazardous environments since we climbed down from the trees. One of the reasons that the couple who will be chosen for Inspiration Mars will be beyond child-bearing age is because of the potential damage to the woman’s eggs from cosmic radiation, which is much higher both during the journey to Mars and on the planet itself. This is because Mars lacks both earth’s protective magnetic field and thick atmosphere. Such damage could result in birth defects for any resulting offspring. For the Inspiration Mars couple, this could be mitigated by freezing eggs and storing them safely back on earth until they return, but Mars settlers won’t have that option.

Now, I’m all in favor of letting people take their own risks for their own rewards. Exploration and settlement have never been free of hazard. But when it comes to bringing new human life involuntarily into a world with a very high, or at least completely unknown risk of debilitating or even agonizing results, we should err on the side of bioethical caution, and (like Inspiration Mars) select the first colonists on the basis of their (lack of) fertility, whether natural or voluntarily attained.

What I would suggest to the Mars One people, though, is given that they’re planning to spend billions on this project, and the long-term goal is to have true human settlement of the planet, which necessarily involves offspring of the settlers, they devote a modest amount of their budget funding research that NASA has completely neglected for decades, but that others have privately proposed, to establish a variable-gravity laboratory in orbit where we can start to understand these issues. The fact that NASA (or Congress) have never given such research any priority whatsoever is eloquent testimony to how unimportant both consider the goal of spreading humanity into the solar system. But until we do, young people who want to go off to barren (at least initially) worlds will have to continue to face the prospect of remaining barren themselves.

Rand Simberg is a recovering aerospace engineer and a consultant in space commercialization, space tourism and Internet security. He offers occasionally biting commentary about infinity and beyond at his weblog, Transterrestrial Musings.
Read more by Rand Simberg
SHOW COMMENTS